The Processional Street (Aj-ibur-shapu, شارع الموكب), or the Processional Path, which has been traced to a length of over half a mile, extended north from the Ishtar Gate and was designed with brick relief images of lions, the animal companion of Ishtar (also known as Inanna) the goddess of love and war, the dragon of Marduk, the lord of the gods, and the bull of Adad, the storm god. Long stretches of the decorated street's course can still be seen in Babylon. However, lavish decoration was limited to a section of about 180 meters which led to the city gate from the north.

The Processional Street of Babylon is intimately associated with the Ishtar Gate and it ran throught the gate, which was lined with walls showing about 120 lions, bulls, dragons, and flowers on enameled yellow and black glazed bricks, symbolizing the goddess Ishtar. Friezes with sixty ferocious Babylonian lions representing Ishtar decorated each side of the Processional Way, designed with variations in the color of the fur and the manes. The Processional Way was paved with large stone pieces set in a bed of bitumen and was up to 66 feet wide at some points.

The current name of the street comes from the Nebuchadnezzar's inscription: "I am Nebuchadnezzar, King of Babylon. I have paved the street of Babylon with stone for the procession of the great Lord Marduk [the city God of Babylon]. May Marduk, Lord, grant eternal life!" During the Babylonian New Year’s festival, the three divine beings lion, dragon, and aurochs acted as guardians of the procession. A broken passage in Nebuchadnezzar's Brisa inscriptions suggests these three gods were on occasion carried along the Processional Path.

Approximately 120 striding lions were represented on the walls of the Processional Way that ran in a straight line from the centre of the city from south to north along the eastern side of the Southern Palace to the Ishtar Gate, from where it led to the Akltu temple (bit akîtu) beyo city walls. In view of its architectural context, the Processional Path is the extended passage from the city gate and the Ishtar Gate, and the lions represented on the walls of this festive street most likely functioned to reinforce the power of the curse through their fierce nature.

Reconstruction at the Archaeological Site in Iraq
The original site was unearthed by the prominent German archaeologist Robert Koldewey, whose excavation of Babylon lasted from 1899 until 1917. During the Saddam era, Iraq reconstructed the thoroughfare at one of the higher levels, but since the 1990s has actively sought the return of the original gate and associated artifacts.

The stone slabs of the street were fixed with asphalt, still to be seen today.

Reconstruction of Glazed Tiles in Pergamon Museum
Walter Andrae (1875–1956 CE), one of the most renowned German Near Eastern archaeologists in the period preceding the First World War, managed to secure the transfer of the Processional Street of Babylon's glazed tiles, along with a large number of other Ashur and Babylon finds, to Berlin.

Simultaneously with the reconstruction of the Ishtar Gate, a small section of the Processional Street was reconstructed in the Pergamonmuseum, albeit reduced in width in comparison to the original. On both sides, lions are seen striding against a blue background. Although the current display has altered over the decades, the so-called Processional Street and the Ishtar Gate hall ensemble at the Pergamon Museum was created by Walter Andrae, in a manner that gave form to his personal, tightly woven version of the story of the Ancient Near East, developed in accordance with anthroposophical thinking on the history of humankind.

In certain areas of Nebuchadnezzar II’s processional way and the gate, the bricks were left unglazed. In other sections, however, artists employed the brightest colors available, in particular blue. The color blue, and especially dark blue, was important to the Babylonians, as it represented the heavens.

Depictions of Babylonian Lions
The lions are made of moulded and coloured glazed bricks: their bodies are coloured white with dark orange manes or dark orange with blue mains. They are against either a light or dark blue background. Their mouths are gaping, so that the fan visible to emphasise their fierce nature. Each of the lion reliefs would have required about 70 individually molded bricks.

Ishtar Gate
The reconstructed Ishtar Gate in the Pergamon Museum in Berlin. The external facade features two columns and five rows of depicted animals on two seperate panels on each side of the entrance portal. Rows on both panels from top to bottom depict aurochs, mušḫuššus, aurochs, mušḫuššus, aurochs respectively. The front of the gate has a low-relief sculpted design with a repeated pattern of images of two of the major gods of the Babylonian pantheon. This is only the top (nearly) half of the outer most gate (illustration). 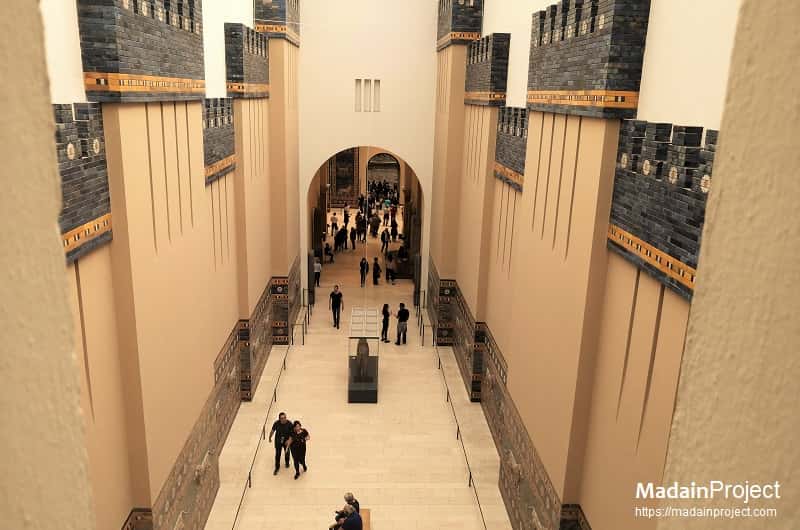