Construction began under the emperor Vespasian (reigned circa 69–79 CE) in 72 CE and was completed in 80 CE under his successor and heir, Titus (reigned 79–81 CE). Further modifications were made during the reign of Domitian (reigned 81–96 CE).

The three emperors that were patrons of the work are known as the Flavian dynasty, and the amphitheatre was named the Flavian Amphitheatre (Latin: Amphitheatrum Flavium; Italian: Anfiteatro Flavio by later classicists and archaeologists for its association with their family name (Flavius).

The Colosseum was used to host gladiatorial shows as well as a variety of other events. The shows, called munera, were always given by private individuals rather than the state. They had a strong religious element but were also demonstrations of power and family prestige, and were immensely popular with the population. Another popular type of show was the animal hunt, or venatio.

Exterior
Unlike earlier Greek theatres that were built into hillsides, the Colosseum is an entirely free-standing structure. It derives its basic exterior and interior architecture from that of two Roman theatres back to back, in an elliptical plan. The height of the outer wall is 48 meters (157 feet / 165 Roman feet). The outer wall is estimated to have required over 100,000 cubic metres (3.5 million cubic feet) of travertine stone which were set without mortar; they were held together by 300 tons of iron clamps. However, it has suffered extensive damage over the centuries, with large segments having collapsed following earthquakes. The north side of the perimeter wall is still standing. The surviving part of the outer wall's monumental façade comprises three stories of superimposed arcades surmounted by a podium on which stands a tall attic, both of which are pierced by windows interspersed at regular intervals. 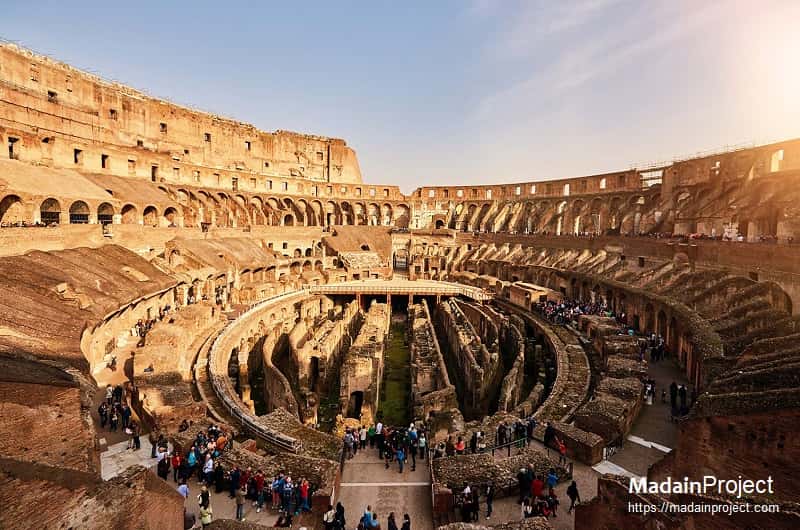 Interior
The interior of the Colosseum is majorly composed of three parts, the hypogeum, the arena floor and the cavea, which is further composed of several more integrated structures. The central arena, where the games were actually carried out, is an oval 87 meters (287 feet) long and 55 meters (180 feet) wide, surrounded by a wall 5 meters (15 feet) high, above which rose tiers of seating. It comprised a wooden floor covered by sand (the Latin word for sand is harena or arena), covering an elaborate underground structure called the hypogeum (literally meaning "underground"). The hypogeum was not part of the original construction but was ordered to be built by Emperor Domitian. Little now remains of the original arena floor, but the hypogeum is still clearly visible.