The Processional Way (Aj-ibur-shapu, شارع الموكب), which has been traced to a length of over half a mile, extended north from the Ishtar Gate and was designed with brick relief images of lions, the symbol of the goddess Ishtar (also known as Inanna) the war goddess, the dragon of Marduk, the lord of the gods, and the bull of Adad, the storm god.

The Processional Street ran through the Ishtar gate, which was lined with walls showing about 120 lions, bulls, dragons, and flowers on enameled yellow and black glazed bricks, symbolizing the goddess Ishtar. Friezes with sixty ferocious Babylonian lions representing Ishtar decorated each side of the Processional Way, designed with variations in the color of the fur and the manes. The Processional Way was paved with large stone pieces set in a bed of bitumen and was up to 66 feet wide at some points. After the glaze firing, the bricks were assembled, leaving narrow horizontal seams from one to six millimeters. The seams were then sealed with a naturally occurring black viscous substance called bitumen, like modern asphalt. 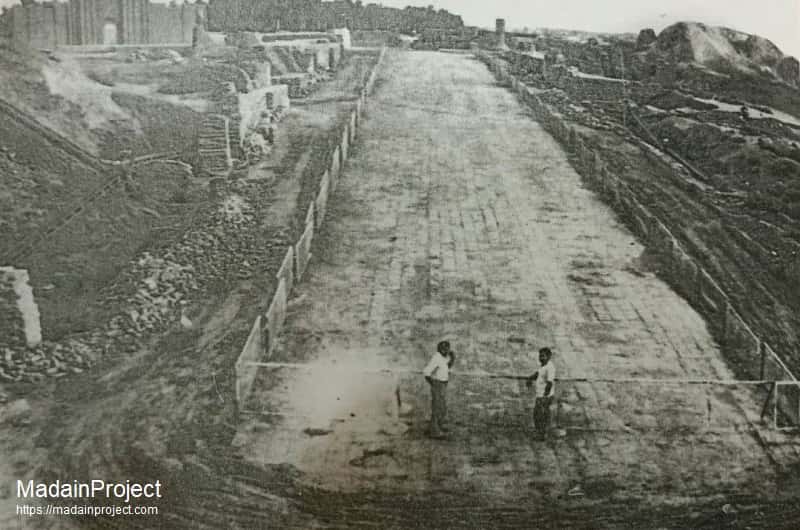 Worshipped as the Mistress of Heaven, Ishtar represented the power of sexual attraction and was thought to be savage and determined. Symbolized by the star and her sacred animal, the lion, she was also the goddess of war and the protector of ruling dynasties and their armies. The idea of protection of the city is further incorporated into this gateway design by the use of crenelated buttresses along both sides to this entrance into the city.

The Processional Street and the Ishtar Gate were only one small part of the design of ancient Babylon that also included the palace, temples, an inner fortress, walls, gardens, and other gates. The lavish city was decorated with over 15 million baked bricks, according to estimates.

Notable Structures Around the Street of Processions 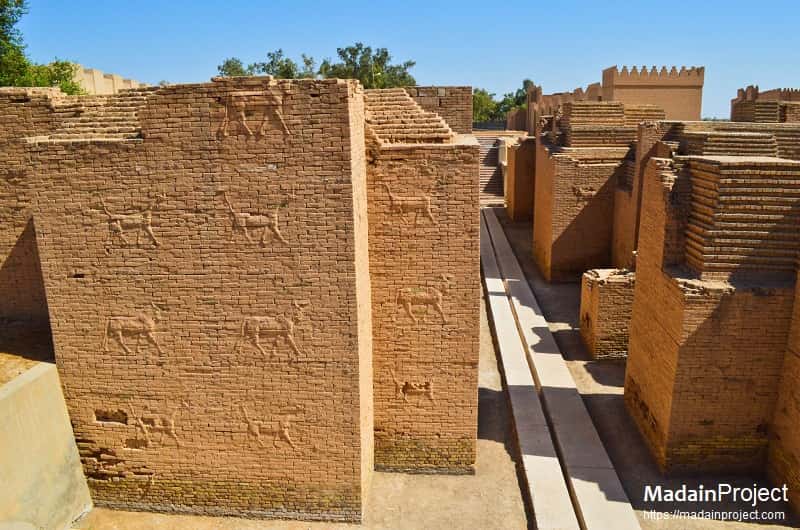 Today only the lower parts of the Ishtar Gate remain in-situ at the site of ancient Babylonian city, known today as Babil. The gate depicted only gods and goddesses with alternating rows of bas-relief mušḫuššu (dragons), aurochs (bulls), and lions, symbolizing the gods Marduk, Adad, and Ishtar respectively. Total length of the ancient gate is about 45 meters from north-south. Parts of the Ishtar Gate and lions from the Processional Way are in various other museums around the world.

The current structure of the Ninmah Temple, was reconstructed in the 1960s, along with a half-size replica of the above ground part of the Ishtar Gate. The reconstructed facade of the temple, which lies to the south-west of the processional street, was dedicated to goddess Ninmah, the E-mah, one of a number of temples in the inner city of Babylon. An older temple was built by Nebuchadnezzar II on this site (604-562 BCE). It is situated east of the Ishtar Gate, and was called e-mah (great temple) of the mother goddess Ninmakh.

A replica of the Ishtar Gate was installed some 250 meters north of the ancient gateway to the city of Babylon. It is located at the entrance to the Nebuchadnezzar Museum. It is a very simplified model of the original ancient Ishtar Gate, and is not to scale. The construction was meant to emulate the techniques that were used for the original gate. The purpose of the replica's construction was an attempt to reconnect to Iraq's history. Damage to this reproduction has occurred since the US-Iraq War, specially due to the use of this area by the US military as a camp. 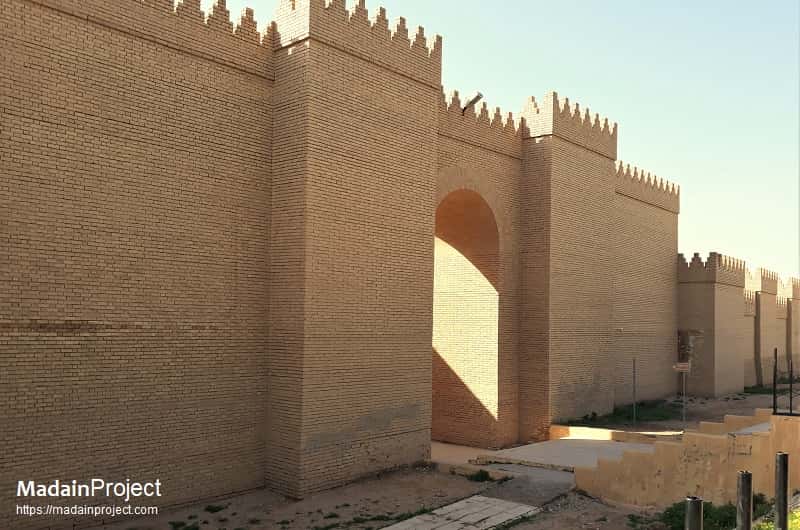