Jerusalem was named as Urusalim on ancient Egyptian tablets, probably meaning "City of Shalem" after a Canaanite deity, during the Canaanite period (14th century BCE). During the Israelite period, significant construction activity in Jerusalem began in the 9th century BCE (Iron Age II), and in the 8th century the city developed into the religious and administrative center of the Kingdom of Judah.

The Haram al-Sharif is a walled compound within the Old City of Jerusalem, the site of two magnificent structures: the Dome of the Rock to the north and the al-Aqsa Mosque to the south. King Solomon, according to the Bible, built the First Temple of the Jews on this mountaintop circa 1000 BCE, only to have it torn down 400 years later by troops commanded by the Babylonian king Nebuchadnezzar.

Church of the Holy Sepulchre 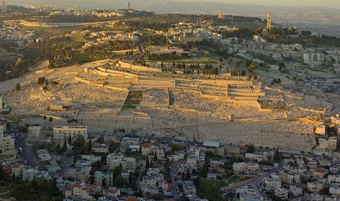 Church of All Nations