Ninmah or Ninmakh Temple (معبد ننماخ), located near the Ishtar Gate on the Street of Processions. According to Tallay Ornan the plans of the temple and it's contemporaneous great palace of Nebuchadnezzar II resemble structures from the old Babylonian period rather than their Assyrian counterparts. 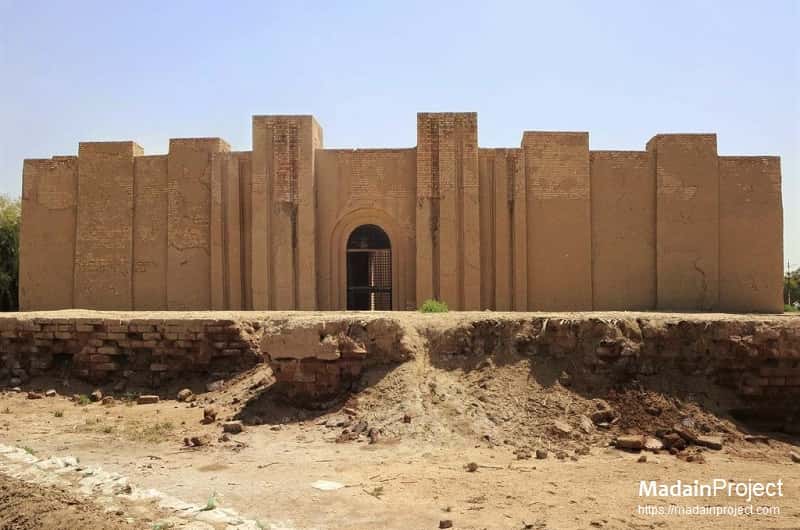 Reconstructed facade of the temple, which lies to the right of the right side of the processional street it was dedicated to goddess Ninmah, the E-mah, one of a number of temples in the inner city of Babylon. Ninmah was a mother goddess in ancient Mesopotamia. Most of the walls were reconstructed during the 1980s CE by Saddam Hussein, former president of Iraq. An older temple was built by Nebuchadnezzar II on this site (604-562 BCE). It is situated east of the Ishtar Gate, and was called e-mah (great temple) of the mother goddess Ninmakh. 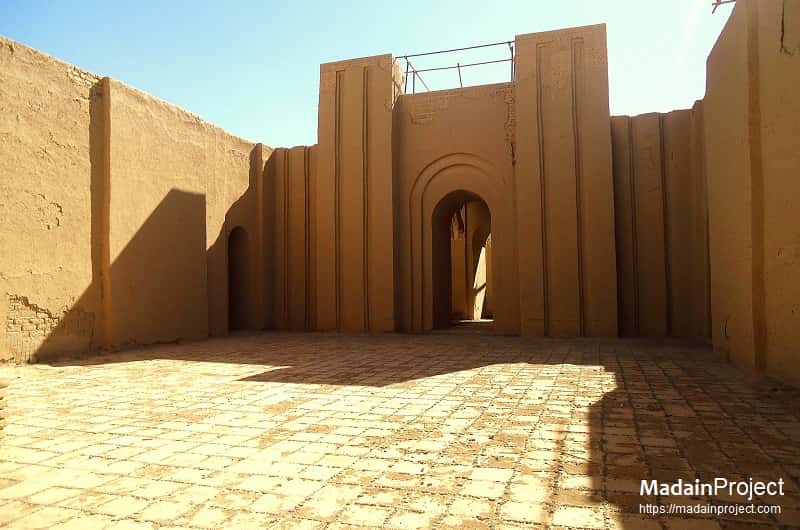 The central courtyard of the temple, characterised with the presence of the holy well. The inner santum of the temple of Ninmah was restricted for women only, who would gather in the sacred precint of the temple and pray for good marriages and married women would pray for offspring among other worship rituals. The women also used the water from this well for ritual bathing and for purification. It was one of the several sacred wells located in the sacred precints around the city.

Artist's concept of the original building as it would have stood. During excavations carried out in the vicinity of the Ninmah Temple, a large number of artefacts were discovered, including clay female figurines, a clay tablet bearing the names of workers and their wages. The plan of the temple was very simple, it consists of a central courtyard surrounded by several rooms, including the chamber of Holy of Holies, where the statue of the godess was placed and religious hymns were offered. 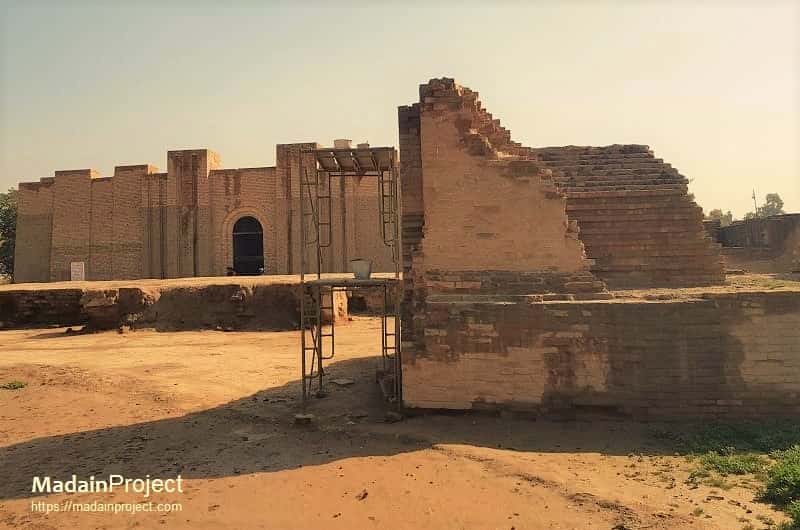 Study shows that the temple structure and the attached fortification wall encompassed several rebuilding phases, which cannot be dated solely to the Neobabylonian time. The ground plan of the Ninḫursaĝ temple changed more than once and was used at least till the Parthian time. The pavement (flooring) of the temple previously thought to date back to the Neobabylonian time actually belongs to the Parthian era. 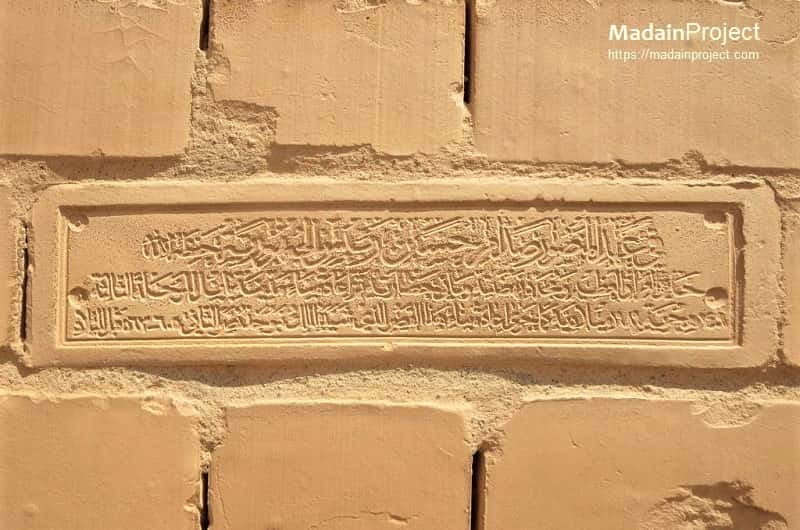 The Saddam Inscription, mentioning the details of reconstruction. It was one of the four major temples of the ancient Babylonian city state, in addition to the temple of Nabu, temple of Ishtar, temple of Murdoch. 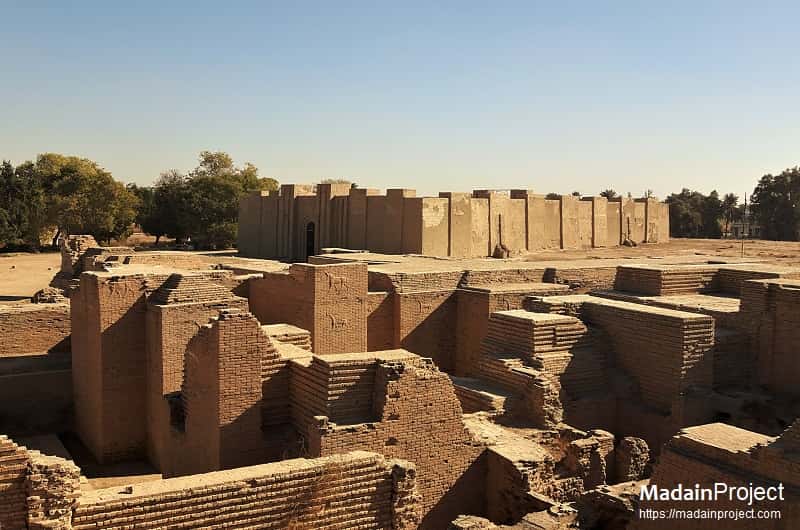 The E-mah (great temple of Ninḫursaĝ) as seen from the west, looking over the Ishtar Gate in the bottom foreground. Currently the walls and roofs of the temple are in a very bad condition and no recent renovations have been done. Due to its use as military base by US the site has suffered extensive damage, according to a study by the British Museum, the damage was extensive: some 300,000 sq m (4,000 acres) was covered with gravel. 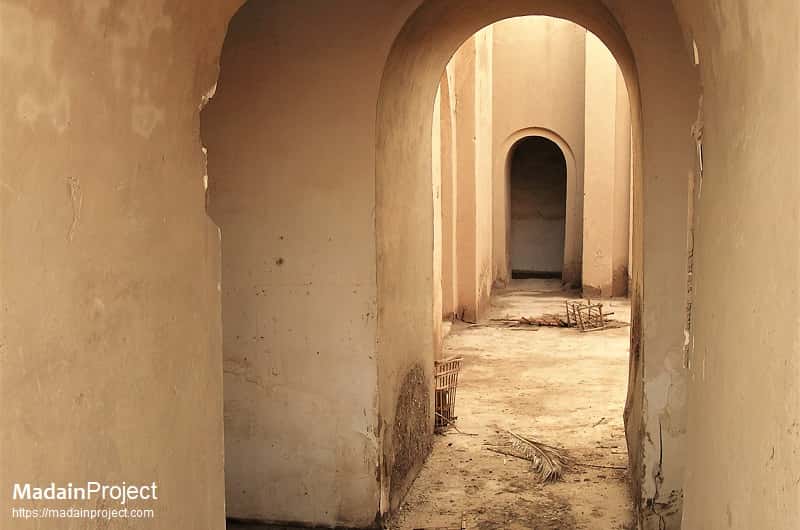 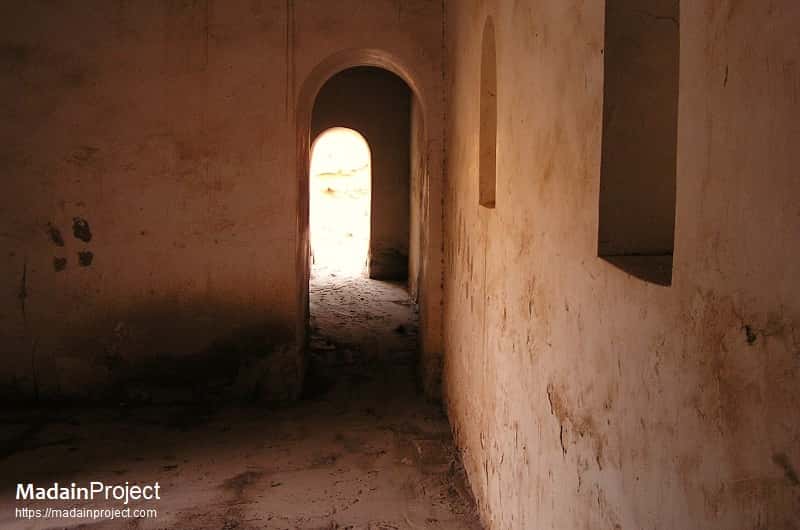