Luxor Temple (معبد الاقصر) is a large Ancient Egyptian temple complex located on the east bank of the Nile River in the city today known as Luxor (ancient Thebes) and was constructed approximately 1400 BCE.

In the Egyptian language it is known as ipet resyt, "the southern sanctuary". In Luxor there are several great temples on the east and west banks.

Unlike the other temples in Thebes, Luxor temple is not dedicated to a cult god or a deified version of the pharaoh in death. Instead, Luxor temple is dedicated to the rejuvenation of kingship; it may have been where many of the pharaohs of Egypt were crowned in reality or conceptually (as in the case of Alexander the Great, who claimed he was crowned at Luxor but may never have traveled south of Memphis, near modern Cairo).

Avenue of Sphinxes
The Avenue of Sphinxes went in a straight line between the Luxor Temple and the Karnak area was lined with human-headed sphinxes of Nekhtanebo I,21, in ancient times it is probable that these replaced earlier sphinxes which may have had different heads. The avenue of human headed sphinxes of over one and a half miles (3 km) once connected the temples of Karnak and Luxor. Around 1,350 sphinx statues are thought to have lined this road together with barque chapels stocked with offerings.

First Pylon
The entrance, first pylon also known as the Pylon of Rameses II, was flanked by six massive statues of Ramesses, two seated and four standing, but unfortunately only two seated statues are still relatively intact. One of the of the two granite obelisks of Ramesses, the other now stands in the Place de la Concorde in Paris. The pylon was half buried in sand until the 1880s but when cleared it revealed two towers measuring 24 meters high and 65 meters wide. They are carved in sunken relief depicting Ramesses at the battle of Kadesh.

abu el-Haggag Mosque
The Mosque of abu el-Haggag (ابو الحجاج) is a mosque located in the Egyptian city of Luxor. Specifically, it stands atop the ruins of Luxor Temple, an Ancient Egyptian centre of worship dating back to the reign of Pharaoh Amenhotep III in the 14th century BCE. The Mosque was built on the site of the Temple before it was excavated. The temple was buried for thousands of years and a mosque of Sufi Shaykh Yusuf Abu al-Hajjaj was built in to the existing structure. And when the temple was unearthed the mosque was preserved.

Theban Triad Shrine
The Shrines of Theban Triad, originally built by Hatshepsut and later renovated by Tuthmosis III. These may have held the statues of Amun, Mut and Khonsu gods of the cult of the Royal Ka. These are located just behind the first pylon in the great perstyle court of Ramesses II.

Serapis Chapel
The Chapel of Serapis, built by Hadrian in the court of Nectanebo I. Built using burnt brick and was dedicated to the god Serapis, is the only one remaining of all Roman structures. Serapeum was built in a Peripteros-temple style (a type of ancient Greek or Roman temple surrounded by a portico with columns), unlike most Roman sanctuaries of Sarapis and Isis, which are prostyle, with columns in front.

Peristyle Courtyard
The peristyle courtyard built by Ramesses the second (replacing an earlier court thought to have been constructed by Amenhotep III) was set at an angle to the rest of the temple. The court is composed of a colonnade around the central open area including a number of colossal statues of Ramesses II and abu al-Haggag Mosque. The great Court of Rameses II is 188 feet (57 m) long and 168 feet (51 m) wide. Seventy four papyrus columns, with bud capitals surround it and in the Northwest corner of the court there is a shrine of Thutmose III, dedicated to Theban triad.

Processional Colonnade
Processional colonnade of Amenhotep III with the granite colossi of Ramesses the Great flanking the entrance. The Colonnade of Amenhotep III has seven pairs of 52 foot (16m) high open-flower papyrus columns, which still support their huge architrave blocks. The reliefs on the walls of the hall bear the names of Tutankhamun, Horemheb, Seti I, Rameses II and Seti II. Tutankhamun decorated the eastern walls but Horemheb later erased the name of the boy king, and inscribed his own.

Sun Court of Amenhotep III
Peristyle sun court built by Amenhotep III features double rows of papyrus columns with barque shrines for Mut and Khonsu at the southern end. Decorations depict the coronation of Amenhotep III by the gods. To the right is the 32 columned vestibule which allows access to the inner santum of the temple. The Court of Amonhotep III measures 148 feet long (45 m) by 184 feet wide (56 m), with double rows of papyrus columns on three sides. The northern end was originally the entrance to the temple. 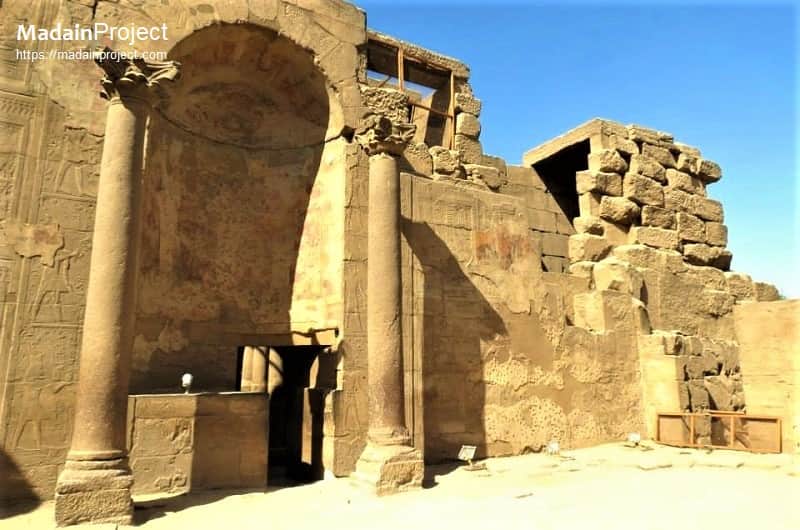 Roman Sanctuary
The apse of the Roman sanctuary, it was converted in to a church cira 300 CE after the Diocletian's persecution of Christians in Egypt. It was transformed, and an apse installed during the Era of the Martyrs along with a few other churches around the site. The small entrance in the apse leads to the offering hall of Alexander the Great. t was here in Luxor that in 1989 workers found a deep pit containing a large quantity of statuary, buried probably in the 4th century CE during the installation of a cult of the deified Roman emperor.

Roman Fortress
During the Roman era, the temple and its surroundings were a legionary fortress and the home of the Roman government in the area. Romans took control of Thebes and the Luxor Temple in about 250 CE, they turned the whole of the Luxor complex into a fortified garrison, and this building is only one of many major building projects they undertook at that time. Over time several structures were converted in to cult shrines and later in to churches.