The Roman Forum (Forum Romanum, Italian: Foro Romano), is a rectangular forum (plaza) surrounded by the ruins of several important ancient government buildings at the center of the city of Rome. Located in the small valley between the Palatine and Capitoline Hills, the Forum today is a sprawling ruin of architectural fragments and intermittent archaeological excavations.

Citizens of the ancient city referred to this space, originally a marketplace, as the Forum Magnum, or simply the Forum. For centuries the Forum was the center of day-to-day life in Rome: the site of triumphal processions and elections; the venue for public speeches, criminal trials, and gladiatorial matches; and the nucleus of commercial affairs. Here statues and monuments commemorated the city's great men. The teeming heart of ancient Rome, it has been called the most celebrated meeting place in the world, and in all history.

Many of the oldest and most important structures of the ancient city were located on or near the Forum. The Roman Kingdom's earliest shrines and temples were located on the southeastern edge.

Other archaic shrines to the northwest, such as the Umbilicus Urbis and the Vulcanal (Shrine of Vulcan), developed into the Republic's formal Comitium (assembly area). This is where the Senate—as well as Republican government itself—began. The Senate House, government offices, tribunals, temples, memorials and statues gradually cluttered the area. 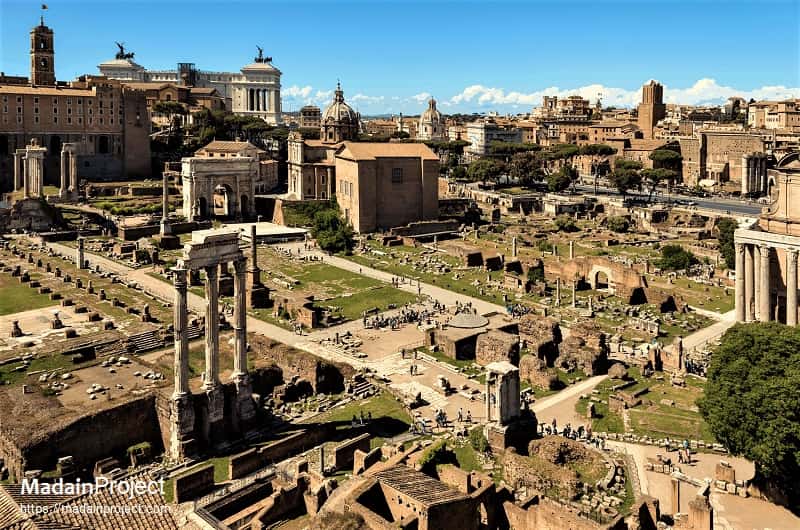 Mamertine Prison
The Mamertine Prison was in use until the 4th century CE and in the 16th century the church of San Giuseppe dei Falegnami was built on top of the Mamertine prison. The name Mamertine is probably derived from the Latin "Mamertinus", referring to the god of war Mars and his nearby altar. According to legend, the apostles Peter and Paul were also imprisoned in this prison, although there is no real evidence for this. In the time of ancient Rome (between 600 and 500 BCE) the little jail cell was known as the Tullianum and was actually constructed as a cistern for a spring in the floor of what would become one of the cells.

Temple of Saturn
The Temple of Saturn is the oldest sacred place in Rome, after the Temples of Vesta and Jupiter. It was rebuilt in 42 BCE and again, in the fourth century CE, by the senate and people of Rome, as recorded on the architrave. The surviving Ionic columns, with their scrolled volutes, date from this period. Suetonius in his book Life of Augustus (XXIX. 4-5), mentions that the reconstruction of the temple was undertaken by Lucius Munatius Plancus, at the encouragement of Augustus, who "often urged other prominent men to adorn the city with new monuments or to restore and embellish old ones, each according to his means".

Temple of Castor and Pollux
The Temple of Castor and Pollux in the Roman Forum, Rome, was originally built in 484 BCE and rebuilt by Tiberius in 6 CE. Only three columns and part of the architrave stand today. The Temple of Castor and Pollux frequently served as a meeting place for the Senate and was where the standards of weights and measures were kept. There was a high podium, with stairs leading down to a rostra and, in the intercolumniations at the base, a series of chambers (loculi). Originally, the front of the podium was designed to provide a tribunal or platform for speaking; but, by the early third century, the lateral stairs had been replaced by a single flight in front. Clodius completely demolished the steps, effectively transforming it into a fortress. 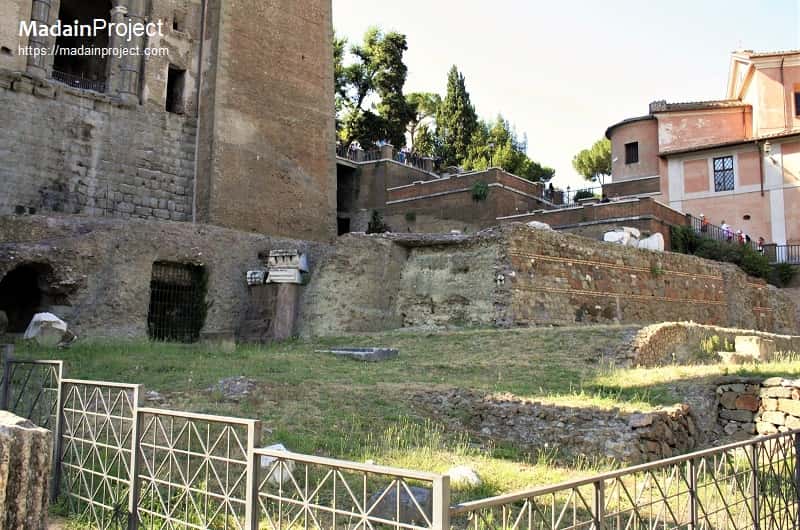 Temple of Concord
The Temple of Concordia Dedicated in 367 BCE to commemorate the reconciliation between patricians and plebians, the Temple of Concord was rebuilt in 121 BCE to foster harmony after the murder of Gracchus. It was restored during the reign of Augustus by Tiberius, who probably rededicated the Temple in 12 CE. The restoration was distinguished by its opulent marble and rich architectural ornamentation. In the cella, which is the central chamber or sanctuary of a temple, a row of Corinthian columns, the capitals of which had pairs of leaping rams in place of the corner volutes, was raised on a continuous plinth projecting from the wall, which divided the cella into bays, each containing a niche. Such was the wealth of fine Greek sculpture, paintings, and other works of art that the Temple seems to have been a museum. It also was used for meetings of the Senate, especially in times of civil disturbance. 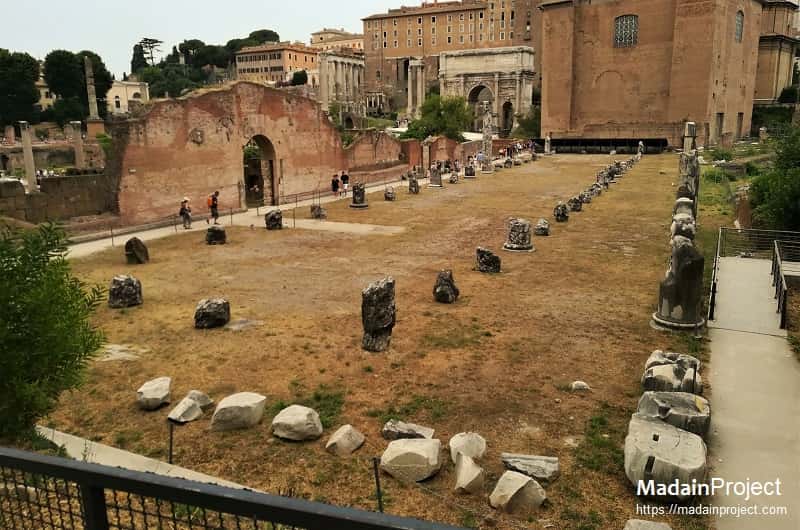 Basilica Aemilia
The Basilica Aemilia () Erected in 179 BCE by the censors Marcus Aemilius Lepidus (after whom the basilica is named) and Marcus Fulvius Nobilior, completely rebuilt over two decades and dedicated in 34 BCE, restored after a fire by Augustus in 14 BCE, and then again in 22 CE on its two-hundredth anniversary, the Basilica Aemilia was considered by Pliny to be one of the most beautiful buildings in Rome. It was a place for business and, in the porticus of Gaius and Lucius (the grandsons of Augustus) fronting the Forum, there were the Tabernae Novae (New Shops). On the colored marble floor one still can see the the stains of bronze coins.

Basilica Julia
The Basilica Julia (Basilica Giulia) Named after Julius Caesar, who dedicated it in 46 BCE from the spoils of the Gallic War, the Basilica Julia was completed by Augustus but burned shortly afterward and was not rededicated for another twenty years, in 12 CE. It again was rebuilt by Diocletian after the fire of 283 CE and later restored by Gabinus Vettius Probianus, urban prefect in 416 CE, who embellished the interior with statues by Polyclitus, Praxiteles, and Timarchus (his son). The Basilica housed the civil law courts and tabernae provided space for government offices and banking. In the first century CE, it also was used for sessions of the Centumviri (Court of the Hundred), who presided over matters of inheritance. In his Epistles, Pliny the Younger describes the scene as he pleaded for Attia Viriola, whose 80-year-old father has disinherited her within days of taking a new wife (VI.33).

Curia Julia
The Curia Julia Begun by Julius Caesar to replace the old Curia Hostilia, which had burned (along with the body of Clodius Pulcher) in riots in 52 BCE, the new Senate House was completed in 29 BCE by Octavian who, two years later, would be given the title of Augustus (Augustus, Res Gestae, XIX; Dio, Roman History, LI.22.1). The Curia Julia may have been afflicted by the Neronian fire of 64 CE, the fire of 69 CE on the Capitoline Hill, or a fire in 80 CE during the reign of Titus. Whatever damage was sustained, it was restored by Domitian in 94 CE and, after another disastrous fire in 283 CE, completely rebuilt to the same dimensions by Diocletian. 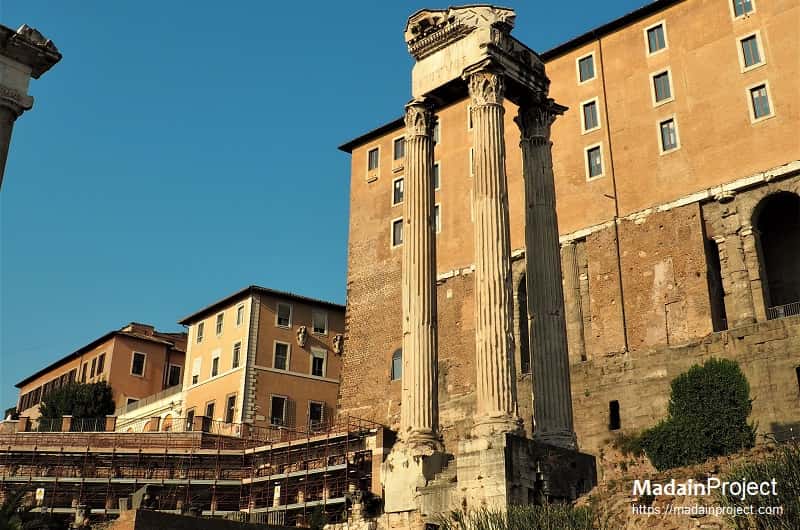 Temple of Vespasian and Titus
The Temple of Vespasian and Titus Begun by Titus after the death of his father Vespasian in 79 CE, the Temple of Vespasian was completed by his brother Domitian when Titus, himself, died two years later. Three fluted columns from the southeast corner of the pronaos still carry part of the entablature, the frieze of which was elaborately decorated with implements of sacrifice and bucrania (ox skulls), which were believed to ward off evil. The architrave surmounting the Corinthian capitals show the last few letters of an inscription, [R]ESTITVER[UNT] (they restored), commemorating the restoration of the temple by Septimius Severus and his son Caracalla. It still could be read in the eighth century, when it was recorded in the itinerary of a visiting monk from the monastery at Einsiedeln.

Arch of Titus
The Arch of Titus (Arcus Titi) Situated at the highest point of the Sacra Via, the Arch of Titus was erected by Domitian sometime after the death of his brother in 81 CE, commemorating the capture of Jerusalem by Titus in 70 CE. It was after this campaign, when Titus was relaxing at Caesarea Philippi, that he fell in love with Berenice, the daughter of Herod Agrippa I. When she and her brother Herod Agrippa II visited Rome in about 75 CE, Titus lived openly with her (Dio, LXV.15.3-4). Four years later, Titus succeeded to throne at the death of his father Vespasian and was obliged to give up Berenice, which was "painful for both of them" (Suetonius, VII.2). Berenice and Agrippa had tried to dissuade the Jews from rebelling, and it is before them that Paul pleaded his defense of Christianity in Acts: 25-26. 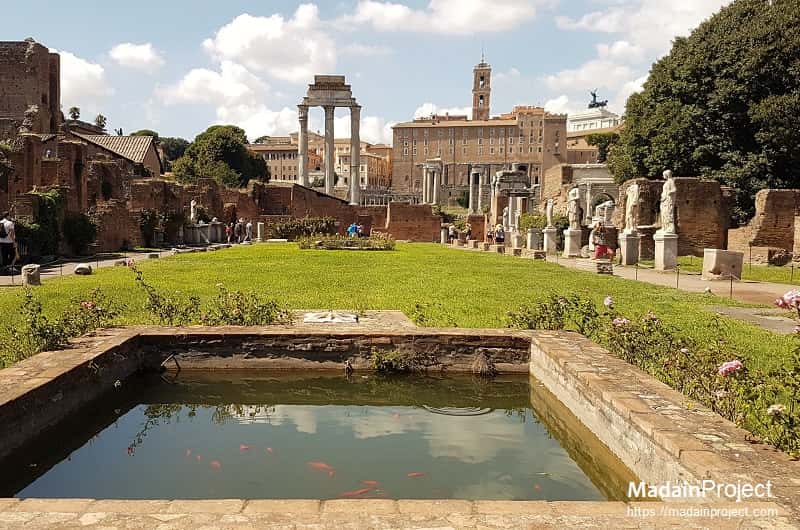 House of the Vestals
The House of the Vestal Virgins (Atrium Vestae) was begun by Domitian and completed by Trajan about 113 CE. The complex is found within the Roman Forum, between the Regia and the Palatine Hill. The development of the complex grew throughout the thousand years the Vestals virgins remained. The first house was built at the foot of the Palatine Hill, containing the Temple of Vesta, as well as sleeping quarters, however, it was destroyed in 64 CE due to a fire. The House of Vestals was an important part of Roman culture, so it was rebuilt several times throughout the Empire.

Temple of Antoninus and Faustina
The Temple of Antoninus and Faustina was built by Antoninus Pius on the north side of the Sacra via at the entrance to the forum, just east of the basilica Aemilia, in honour of his deified wife, the empress Faustina, who died in 141 CE. After the death of Antoninus himself in 161, the temple was dedicated to both together. The inscription on the architrave records the first dedication, and that added afterwards on the frieze records the second. In consequence of this double dedication the proper name of the temple was Templum d. Antonini et d. Faustinae.

Arch of Septimius Severus
The Arch of Septimius Severus was built in 203 CE to celebrate the victory over the Parthians. The triple triumphal arch was one of the most richly decorated of its type and even today, although badly damaged, it stands in the Forum Romanum as a lasting and imposing monument to Roman vanity. The inscription on the attic facade, originally with gilded bronze lettering, is a dedication to Septimius Severus and his two sons Caracalla and Geta who 'restored the Republic and expanded the dominion of the Roman people'.

Basilica of Maxentius
The Basilica of Maxentius and Constantine, then known as the New Basilica (Basilica Nova), was emblematic within the building programme of the emperor Maxentius (306–312 CE). Typologically, the building exploited several characteristics of Roman architecture (bath buildings, basilica halls, etc.), reinterpreting and combining them in a successful and original structural whole. The enormous potential offered by the extreme sophistication of Roman imperial building techniques was exploited to create the largest building covered with a system of vaults in the entire empire.

Triumphal Arch of Constantine
The Arch of Constantine, erected in circa 315 CE, stands in Rome and commemorates Roman Emperor Constantine's victory over the Roman tyrant Maxentius on 28th October 312 CE at the battle of Milvian Bridge in Rome. It is the largest surviving Roman triumphal arch and the last great monument of Imperial Rome. The arch was dedicated on 25th July 315 CE on the 10th anniversary of Constantine's reign (Decennalia) and stood on Rome's triumphal route. The monument is an imposing 21 metres high and 25.6 meters wide rectangular block of grey and white Proconnesian marble consisting of three separate arches.

Column of Phocas
The Column of Phocas was the last monument to be built in the Roman Forum, the inscription on the pedestal of the column indicates that the gilded statue on top was dedicated in 608 CE by Smaragdus, the exarch (governor) of Italy, to the Byzantine emperor Phocas. The fluted marble column and the corinthian capital were appropriated from other monuments, the high plinth on which they stand originally used to suppoet the honorary column to Diocletian.