Lion of Babylon (أسد بابل) is a stone sculpture that was found in the ancient city of Babylon, Iraq. Carved out of black basalt stone, it is about two meters long, while its length is not more than one meter. 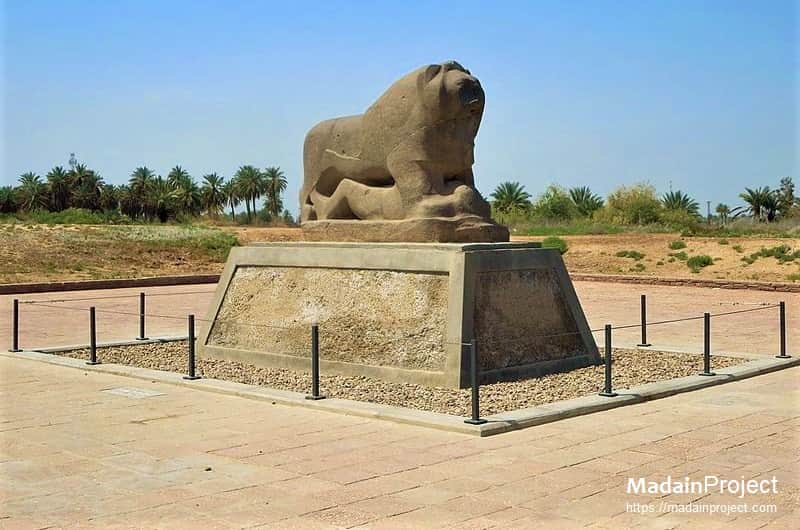 The basalt Lion of Babylon statue at Babylon, Iraq, notice the absence of "eagle's wings". Discovered in 1876 it may have been built by either Nebuchadnezzar II (605-562 BCE) or Hittites. It was found by a German expedition near Babil Gardens in Iraq, but many people are unaware of the story of this statue, which is what we will tell you in this article.

It is located north of the reconstructed remains of the ancient Babylon and north-east of the the Saddam Hussein's Babylonian Palace. The Lion of Babylon is an ancient Babylonian symbol and symbolically represented the King of Babylon. The depiction is based on the Mesopotamian lion, which used to roam in the region.

In 2013 The World Monuments Fund worked with the Iraq State Board of Antiquities to make improvements to the site. The Lion was cleaned and partially restored, the base of the statue was replaced, and a security barrier was added. The Lion is the symbol of Babylon, and represents Ishtar, the goddess of fertility, love and war. Meant not only to symbolise Babylon, but to instill fear in enemies, it seems fitting that a single stone lion, albeit poorly preserved, is the only true remainder of Babylon that stands in Iraq today.

The Babylonian Lion, a symbol of power, strength and royalty, it was extensively depicted on the Processional Path and the Ishtar Gate. The use of Lions as an allegory of protection and its symbolism can be seen as far as eastern Arabia. The Lions' Tombs of Dadan as believed to carry this Mesopotamian influence, and are the proud iconic figures of this ancient oasis.