Qanatir (قناطر), also known as the Arched Gates (البوائك) or 'The Scales' (الموازين), are the arched structures that surround the Dome of the Rock Platform. According to legend on the Day of Judgement the scales of judgement will be suspended to these arches or in place of these arches. In al-Aqsa Mosque, arches present important evidence and features of the eras that al-Aqsa Mosque has witnessed over the centuries, such as the Mamluk, Abbasids, Fatimid’s and Umayyad eras.

Southern side of the Dome of Rock platform has two sets of arches one with 4 arches in the center and 3 on the south-eastern corner of the platform.

First built during the Abbasid Era it was renovated twice: once during the Fatimid Era and once by the Ottoman Sultan Abdul Hamid II. The gate has a sundial (inspect) that was carved in the middle of its southern façade by Eng. Rushdi Imam, the architect of the Supreme Islamic Council, adding a distinguished feature to it that no other arched gate surrounding the Dome of the Rock has.

3 arches on the south-eastern corner of the platform, with Dome of the Chain and Dome of Rock buildings partially visible. This Gate was built in 1030 CE during the Fatimid era. It consists of two stone pillars with two marble columns topped with three arches between them.

Western side of the Qubat ul-Sakhr'a platform has three sets of arches, two with 4 arches and one with 3 arches.

The set of 3 arches on the south-western cornet of the Qubat ul-Sakhra platform with Dome of al-Nahawiya to the right. Prince Naser Ad-Din An-Nashashibi, the governor of Jerusalem during Sultan Qaitbay’s reign, supervised building this gate in 877 AH/14721473 AC. It consists of two stone pillars that have two marble columns between them which are topped with three arches.

Arches at the main (center) approach stairway, these are located closest to the Qubat ul-Sakhr'a and leads directly to the western entrance of Dome of Rock. The Sebil-i Qayt Bay and the Bab al-Silsila Minaret are also visible in the background. The Western Arched Gate was built in 320 AH; however, its founder remains unknown. It consists of two stone pillars that have three marble columns between them which are topped with a number of arches.

Arches on the nort-western corner of the inner platform, with Dome of Spirits to the right and Minaret of Bani Ghanim in the far background. Directly behind the Qubat ul-Arwa'h (Dome of Spirits) are some of the administrative buildings.

The North-western set of arches, leads directly to the King Faisal Gate (Bab Atim), Sebil-i Sultan Suleyman and Qubbat ul-Ushuq (Iwan of Sultan Mahmud II). The Northwestern Arched Gate was built by the Mamluk King AlAshraf Sha’ban in 778 AH/1386 AC, and was renovated in 926 AH/1519 AC by the Ottoman Sultan Suleiman the Magnificent. It consists of two stone pillars that have two marble columns between them which are topped with arches.

The North-eastern set of arches, with some of the administrative buildings on both sides. These arches lead to the Absolution Gate or the Bab-i Hittah located on the northern flank of Haram al-Sharif. Sultan Mohammad bin Qalawun has built this gate in 726 AH/1325 AC. It consists of two stone trusses that have two thin stone columns between them which are topped with arches.

On the eastern side there is a single set of five arches. 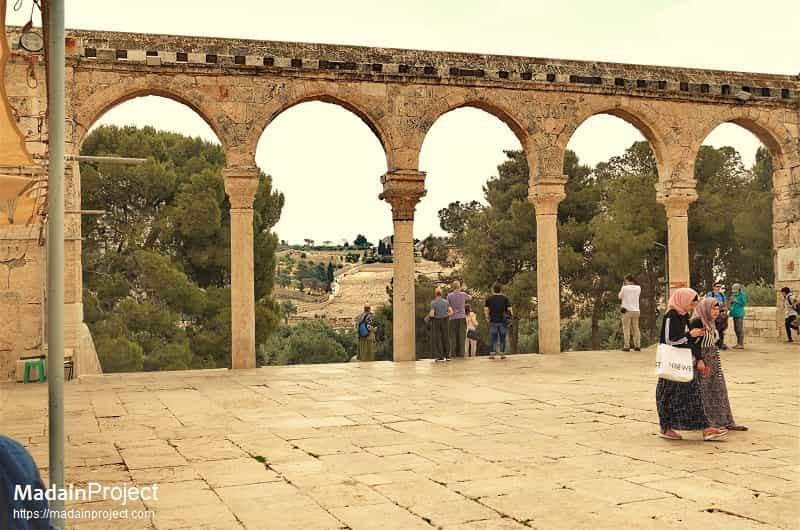