The Gate of Darkness (باب العتم), (Arabic: Bab al-Attim‎), is located on the north side.

Bab al-'Aatam [the Dark Gate] is located at the center of the northern wall of the blessed al-Aqsa Mosque and provides access from the HaMalech Faisal Street. One of three gates on the north side, the gate spans 4 meters high and its entrance is rectangular with an arched top. It was most likely built during the Umayyad period. It was refurbished in the Ayyubid period and during the reign of King Issa in the 610 Hijra, 1213 CE. 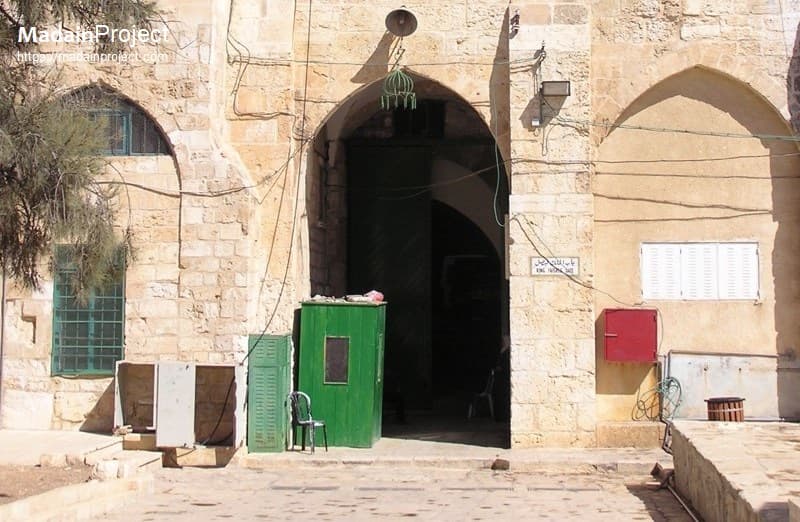 The Gate of Darkness is located in Al-Aqsa’s northern part; it was last renovated in 1213 CE (610 Hj.) by the Ayoubi King Al-Moatham Sharf Ad-Din Issa. The gate is known by a variety of names such as the Gate of Darkness, the Gate of Faisal in tribute to the Hashemite King Faisal’s visit to Al-Aqsa Mosque in 1930, and the Honor of the Prophets after the Honor of the Prophets Quarter to which the gate leads, and the Duwaidaryah Gate because of its close location to AlDuwaidaryah School.

It has many names, the most famous of which is Bab al-Aa'tam, because of the dark road that leads to the gate from the north. The modern and most commonly used name for the gate among residents of Jerusalem is Bab al-Malik Faisal [King Faisal Gate]. The name was given to the gate following a 1943 visit to the Mosque by King Faisal of Iraq, during which he contributed a generous sum of money for the gate's restoration. The gate has other names, such as Bab al-Mu'azmiyya, named for the al-Mu'azmiyya and the Bab a-Dawadariya School Gate (باب الدوادارية) because of the a-Dawadariya school is located next to it outside the northern wall.