Dome of the Chain

Dome of the Chain (قبة السلسلة), Qubbat al-Silsilah, is a free-standing dome located adjacently east of the Dome of the Rock in the Old City of Jerusalem. One of the oldest structures on the Haram ash-Sharif (Temple Mount), it is not a mosque or shrine, but is used as a prayer house. 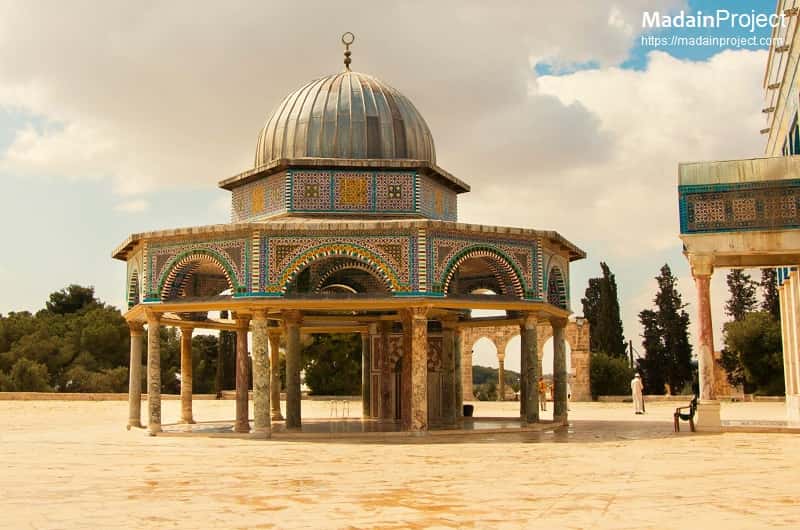 The Dome of the Chain was built by the Umayyads, became a Christian chapel under the Crusaders, was restored as an Islamic prayer house by the Ayyubids and has been renovated by the Mamluks, Ottomans and the Jordanian-based waqf. The hexagonal shape of the Dome of the Chain has a diameter of 14 meters (46 ft), making it the third largest building on the Haram after the al-Aqsa Mosque and the Dome of the Rock.

When the Crusaders invaded the Levant in 1099, they identified the dome as the spot where Saint James was martyred, and transformed the building into a chapel dedicated to him within the Templum Domini. In 1187, the building was returned to Muslim use after Saladin captured Jerusalem from the Crusaders. In 1199–1200, the ceiling and pavings were renewed by the ruling Ayyubids. The Christians re-used the place in 1240–1244, before it reverted to Muslim use.

The structure was renovated by the Mamluk sultan Baybars (r. 1260–1277). The latter's renovations likely involved the refacing of the mihrab with marble. In 1561, under the Ottoman sultan Suleiman the Magnificent, the tiles of the mihrab were glazed and later in 1760, more tile work was done. The last major restoration undertaken at the Dome of the Chain was commissioned by the Islamic waqf of Jerusalem in 1975-76.

Some architectural elements, like marble columns and capitals (inspect) used as part of the structure date to pre-Islamic times, but it is widely accepted by both Arab and Western scholars that the Dome of the Chain was originally built in 691 by the Umayyad caliph Abd al-Malik. The Umayyad design of the building has largely remained unaltered by later restorations. In addition to being a prayer house, the dome was used as a treasury for the local Muslim community.

The building consists of a domed structure with two concentric open arcades, that is: with no lateral walls closing it in. The dome (inspect), resting on a hexagonal drum, is made of timber and is supported by six columns which together create the inner arcade. The second, outer row of eleven columns creates an eleven-sided outer arcade.

The Dome of the Chain owes its name to an ancient legend during King Solomon's rule. According to Mujir ad-Din, ... among the wonders of the Holy House [Haram al-Sharif] is the chain, which Solomon, son of David, suspended between Heaven and Earth, to the east of the Rock, where the Dome of the Chain now stands. The chain had one characteristic. If two men approached it to solve a point of litigation, only the honest and upright man could take hold of it; the unjust man saw it move out of his reach.

The mihrab or prayer niche is on the southern side and is flanked by two smaller columns. There are a total of seventeen columns in the structure, excluding the mihrab. It is known from historical sources that initially there used to be twenty columns, indicating a radical rebuilding phase, probably in the 13th century.