Masada is an ancient fortification in the Southern District of Israel/Palestine situated on top of an isolated rock plateau, akin to a mesa. It is located on the eastern edge of the Judaean Desert, overlooking the Dead Sea 20 km (12 mi) east of Arad. Herod the Great built two palaces for himself on the mountain and fortified Masada between 37 and 31 BCE.

The Masada plateau, meaning “strong foundation or support” in Hebrew, Masada is a natural fortress built on top of a barren mountainous desert plateau thousands of feet above the Dead Sea. Josephus Flavius, the commander of Galilee during the Great Revolt in the first century CE, chronicled the known history of Masada; future excavation of the site has largely collaborated his accounts.

According to Josephus Flavius, the first fort at Masada was built by “Jonathan the High Priest,” thought to be Hasmonean King Alexander Janaeus (who ruled from 103 to 76 BCE), although no definitive ruins have been discovered from that time. 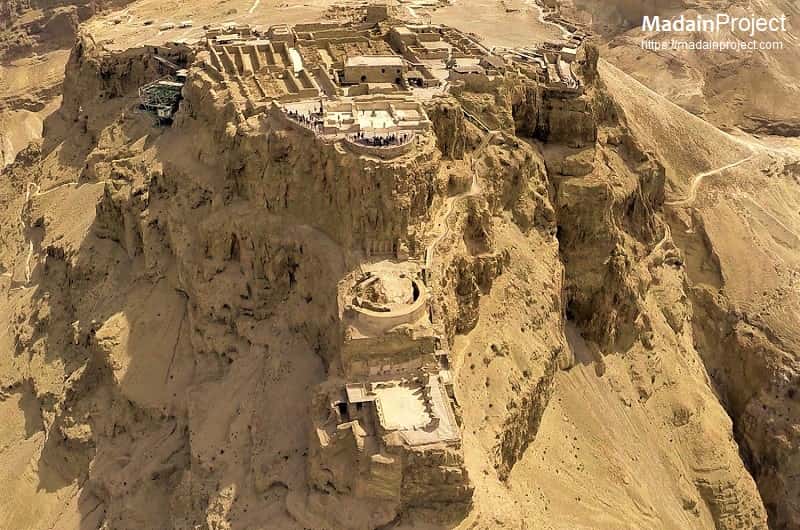 Western Palace
The first of three building phases completed by Herod began in 35 BCE. During the first phase the Western Palace was built, along with three smaller palaces, a storeroom, and army barracks. Three columbarium towers and a swimming pool at the south end of the site were also completed during this building phase. The original center of the Western Palace was square and was accessed through an open courtyard on the northwest corner of the building.

Northern Watch Tower
Northern watch tower, used for observation the tower was built on the highest point of the plateau near the quarry.

Masada Synagogue
The synagogue at Masada, part of the Herodian construction, was a hall measuring 12.5 x 10.5 m., incorporated into the northwestern section of the casemate wall and oriented towards Jerusalem. This synagogue also served the Jews who lived in Masada during the Revolt. They built four tiers of plastered benches along the walls, as well as columns to support its ceiling. This synagogue is considered to be the best example of the early synagogues, those predating the destruction of the Temple of Jerusalem in 70 CE.

Large Mikvah
The public mikvah was built next to the Western Palace. Niches in the walls, presumably were intended for the clothes of visitors. This one was built by rebels apparently. Due to the size of the structure it is speculated that it was a pulic immersion pool, used by the zealots. Near the upper level of steps a "dressing room" was discovered, containing wall niches where clothing could be placed. This stepped pool was interpreted by Yadin as a Herodian swimming pool, possibly used as a public ritual immersion bath (mikveh) by the rebels.

Commander's Residence
The commander's residence or the officers' quarters are located south of the storerooms.

Byzantine Church
A small Byzantine church was established at Masada, during the Byzantine period. The church was part of a monastic settlement identified with the monastery of Marda known from hagiographical literature. The church is entered through a porch or vestibule. The apse, at the east end, has a cavity in the floor which may have housed relics. On the north side of the nave was a (partly preserved) mosaic pavement with representations of plants and fruits.

Western Gate
This Byzantine era entrance allows access to the Masada Fortress Plataeu from the west, close to the Roman Ramp. It is one of the several entrances to the Masada compound.

Columbariums
Herod had three columbariums (housing structure for doves and pigeons) built on the Masada Fortress premises, for the purpose of communication, meat etc. A columbarium is seen on a tower on the west casemate wall. It was used for multiple purposes - as an observation tower, raising pigeons for their meat, and bird droppings which were used as a fertilizer for growing food. Another columbarium tower is located on the south side of Masada, but this one is round.

Roman Siege Ramp
During the siege the Romans constructed a ramp on the west side, which was used to overcome the height differences, raise a tower with a battering ram, and to penetrate the defenses. This photo shows the west side of Masada, and the Roman siege ramp. A modern staircase leads up along the sides of the ramp, one of three ways open for visitors to reach the top.

Southern Reservoir
The southern reservoir or the large swimming pool, built by Herod the great it was of quite an Olympic-size and it can still be seen in the southern part of the fortress.

Snake Path
The snake path, located on the eastern side of the mountain is named for its steep elevation and winding track. Developed around 35 BCE, during the construction of the palaces and served as the primary access way to the mountain. It was built to serve both humans and domesticated working animals, and therefore it is relatively wide and has a moderate inclination.