al-Qamus (حصن القموص) was the name of one of the fortresses of al-Rabi ibn Abu al-Huqayq, Banu Qurayza situated near Khaybar. The fortress was attacked by Muslim forces and it fell to Muslim forces in 629/30 CE. It was after this event that Muhammad married Safiyyah bint Huyayy. Although traditionally it is believed to be the Qamus fort but there is no direct archaeological evidence. The Khaybar was still inhabited by Jews, as late as the late 7th century, who pioneered the cultivation of the oasis.

Qamus Fort was an ancient fortress in the Jewish stronghold of Khaybar oasis. Situated north of Medina, it was takenover by Muslim forces in the Battle of Khaybar. It is located on an elevated ridge, overlooking the old Khaybar. Before the rise of Islam, this fortress town had been inhabited by Jewish tribes; it fell to Muslim forces in 629 CE.

The oasis of Khaybar had several fortresses or redoubts containing homes, storehouses and stables, like this one. Each fortress was occupied by a separate family and surrounded by cultivated fields and palm-groves. In order to improve their defensive capabilities, the settlers raised the fortresses up on hills or basalt rocks. The Qila Qamus and the surrounding dwellings were rebuilt as the headquarters of the Emirate, when it was annexed by King Abdulaziz al-Saud (عبد العزيز آل سعود). 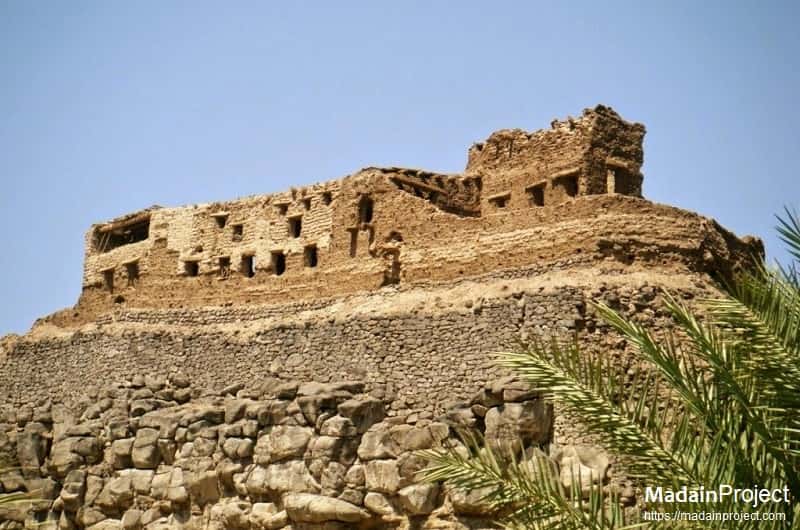 This probably is a modern structure, built on a basalt rock, Khaybar. Locally known as the "Mountain of Jews" the fortress of Qamous is situated on top of a high ridge in the Khaybar region of Saudi Arabia. Before the advent of Islam in the 7th century CE, indigenous Arabs, as well as Jews, once made up the population of Khaybar, although when Jewish settlement in this part of the northern Arabia began is unknown.

Muslim invasion was not the first time Khaybar was sacked, previously in 567, the area was invaded and vacated of its Jewish inhabitants by the Ghassanid Arab Christian king al-Harith ibn Jabalah. He later freed the captives upon his return to the Levant. A brief account of the campaign is given by Ibn Qutaybah, and confirmed by the Harran Inscription.