The Herodium (هيروديون) or Herodeion, 15 kilometers south of Jerusalem the fortress and the palace of Herod the Great is located on a hill shaped like a truncated cone that rises 758 meters above sea level, stood Herodium, the palace-fortress built by King Herod. Herodion is the only site that is named after King Herod the Great.

In Arabic it is known as Jabal al-Fureidis (جبل فريديس), literally the "Mountain of the Little Paradise".

In 40 BCE, after the Parthian conquest of Syria, Herod fled to Masada. On the way, at the location of Herodion, Herod clashed with Jews loyal to his enemy Antigonus, and emerged victorious. According to the Roman Jewish historian Josephus, he "built a town on that spot in commemoration of his victory, and enhanced it with wonderful palaces... and he called it Herodion after himself".

Archaeologists believe that the palace was designed by architects and built by slaves and paid workers (contractors). Herod was considered one of the greatest builders of his time and was not daunted by geography—his palace was built on the edge of the desert and was situated atop an artificial hill. 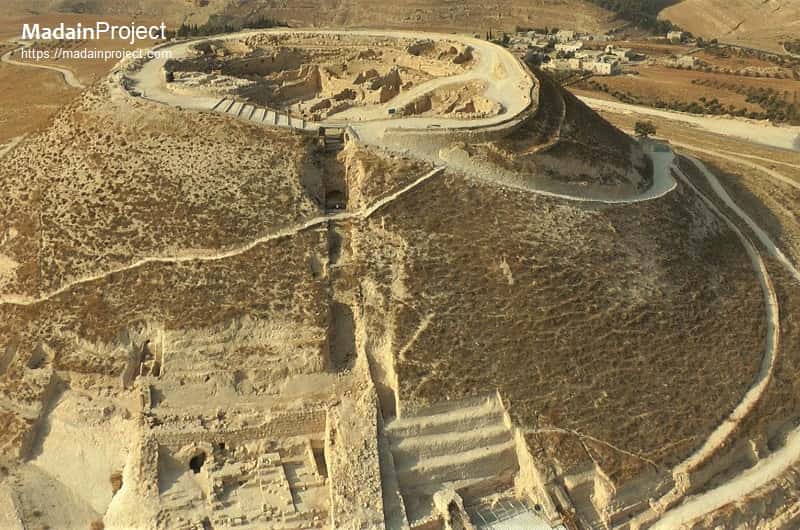 The Upper fortress, or simply Herodion, is a truncated-cone-shaped hill, 12 kilometres (7.5 mi) south of Jerusalem and 5 kilometres (3.1 mi) southeast of Bethlehem, in the Judaean Desert, West Bank. Herod the Great built a palace fortress and a small town at Herodium, between 23 and 15 BCE, and is believed to have been buried there. The upper Herodium is 758 meters (2,487 ft) above sea level, located atop the highest peak in the Judaean Desert.

The lower town is located on the north-west foothills of the fortress. The lower city structures contained offices of the district capital, palace rooms for the visitors and family, Roman garden, and a lake. It extended beyond the modern road, and include another bathhouse and other structures. A few remains of the water channel have been found on the way from Jerusalem to Herodion. The artificial island at the pool's center is thought to have sported 3 floors: a nice place to enjoy the breeze and eat a bite, or just relax.

The tomb of Herod the Great, fabled King of Judaea, has most likely been discovered. Early accounts of Herod's funeral led scholars to believe the tomb would be found at the base of Herodium, but decades of searching the lower complex turned up nothing. In 2006, Netzer suggested the team examine a seemingly out-of-place section of wall halfway up the hill. In April 27, 2007, diggers hit upon a slab of high-quality, highly ornamented pink limestone. Further excavation revealed a remarkably ornate sarcophagus, one fit only for a king. The remains of a huge staircase leading up to the burial site have been uncovered, as well.