The Canaanite era city gate of Ashkelon (عَسْقَلَان), also spelled Ascelon, was built of calcareous sandstone (kurkar) and mud-bricks in the form of a vaulted archway, which was two meters wide and four meters high, with an arched gate at either end. This is the oldest arched gate in the world. The current gate has been restored by Israel Antiquities Authority experts.

The mudbrick city gate (illustration) had a stone-lined, 8 feet (2.4 meters) wide tunnel-like barrel vault due to the immense thickness of the walls. It was coated with plaster coated with white plaster, to support the superstructure. Constructed in four phases, each new gate was superimposed on top of the earlier gate. This process spanned (roughly) from 1825-1775 BCE (Gate 1), 1775-1725 (Gate 2), and 1725-1650 BCE (Gate 3 - the largest in the sequence). During the last phase (1650 BCE) the gate was converted to a small foot bridge, while the north gate was moved to the east.

Gateway
The gateway was built into the large brick wall, just above the earthen rampart. The top of the arch collapsed in ancient times, and was filled in, thus preserving the gate. The width of the gate is 2.5 meters (8 feet) and its height is 3.5 meters (12 feet). It is built of mudbricks and is well-preserved; the inner passage is approx. 2 meters wide and it is approx. 4 meters long. This allows a standard Bronze period wagon to pass through the gate.

The mud brick walls along the sides of the gate, are the towers that flanked the gateway as a second story. These walls reach a height of 6 meters (20 feet). 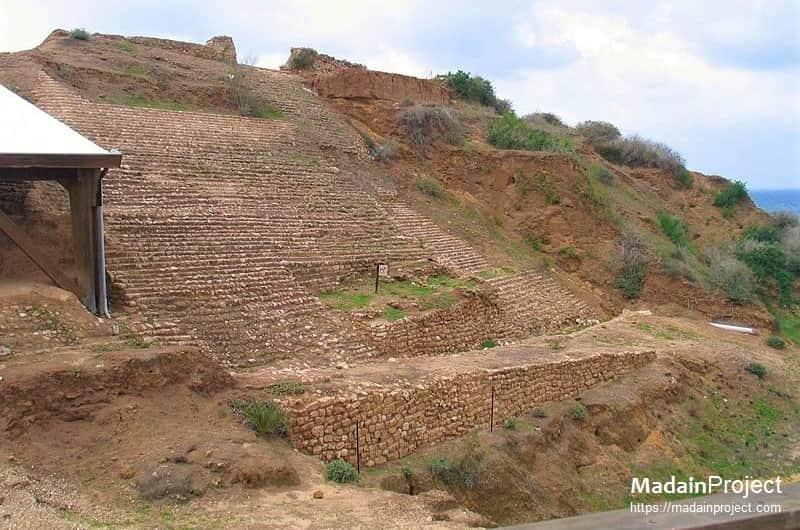 Canaanite Ramparts
The Canaanite rampart was 15 meters (50 feet) high and 46m (150 ft) thick. During the Middle Bronze age, the Canaanites moved enormous amount of earth to create these huge artificial slopes around the entire sandstone hill on which the city was located. The slope was 33-35 degrees on the outer face, make the attackers' ascent difficult.

The Sanctuary of the Silver Calf

A small city shrine was also discovered outside the gate, on a slope descending toward the sea. Inside the shrine, a bronze figurine of a calf overlayed with silver was uncovered. The silver-coated bronze statuette the calf was discovered inside a shrine-shaped pottery vessel in a storeroom of the sanctuary.

The calf was a symbol of the Canaanite deity Ba'al and the shrine may have served for worship Scholars believe the shrine was located on the way to Ashkelon's port so that those embarking on a sea voyage or returning from one could pray or give thanks to the deity for the success of their journey.

Protective Roofing
A roof was installed over the ancient gate after the 2006 damage by the weather. The problems that were identified include the disintegration of building material and the detachment of the mudbrick mass from the walls. The mudbrick mass was eroded and washed away by the rainfall to such an extent that parts of the building mass have been lost. This damage has undermined the structural stability of the edifice and other built remains in its vicinity.