Jaffa Gate (Hebrew: שער יפו‎, Sha'ar Yafo; Arabic: باب الخليل‎, Bab al-Khalil, "Hebron Gate"; also Arabic, Bab Mihrab Dawud, "Gate of David's Chamber"; Crusader name: "David's Gate") is a stone portal in the historic walls of the Old City of Jerusalem. It is one of seven main open gates in Jerusalem's Old City walls. Both the Jaffa Gate and Jaffa Road are named after the port of Jaffa, from which the Prophet Jonah embarked on his sea journey and pilgrims debarked on their trip to the Holy City.

The name Jaffa Gate is currently used for both the historical Ottoman gate from 1538, and for the wide gap in the city wall adjacent to it to the south. The old gate has the shape of a medieval gate tower with an L-shaped entryway, which was secured at both ends (north and east) with heavy doors. The L shape of the historical gateway was a classical defensive measure designed to slow down oncoming attackers, with its outer gate oriented in the direction of Jaffa Road, from which travellers including pilgrims arrived at the end of their journey from the port of Jaffa.

Jerusalem Clock Tower was an Ottoman-era clock tower built over the Jaffa Gate of Jerusalem, comissioned by Sultan Abdul Hamid II. In 1907 a clock was placed on the roof of the gate, and in 1908 a very ornate clock tower was built on top of Jaffa Gate' historical gate tower. The clock tower was built of limestone quarried from the nearby Zedekiah's Cave. It stood 13 feet tall, and was topped by four clock faces, oriented to the cardinal compass points. The clock tower only lasted for a decade and was knocked down by the British in 1922. 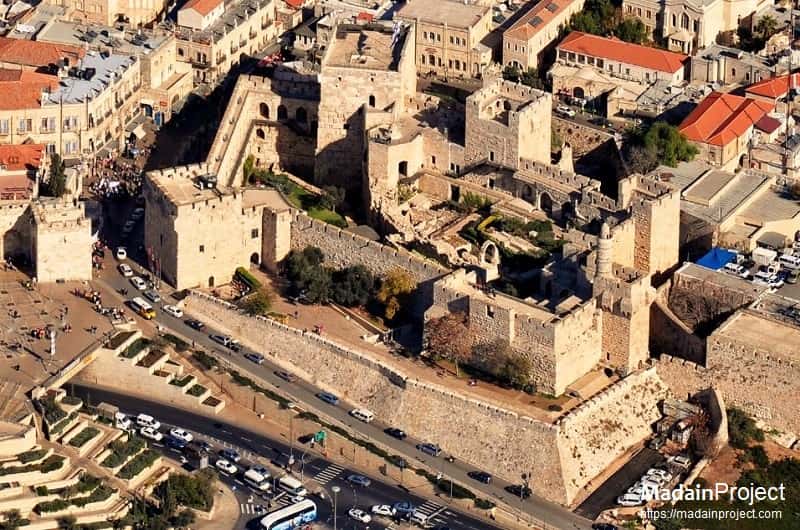 The Tower of David or the Jerusalem Citadel is an ancient citadel located near the Jaffa Gate entrance to the Old City of Jerusalem. Built to strengthen a strategically weak point in the Old City's defenses, the citadel that stands today was constructed during the 2nd century BCE and subsequently destroyed and rebuilt by, in succession, the Christian, Muslim, Mamluk, and Ottoman conquerors of Jerusalem. The citadel is located immediately south of the Jaffa Gate.

In medieval times the Arabs used to call this gate Bab Mihrab Dawud, or "Gate of David's Chamber or Sanctuary", out of the belief that the room atop the Herodian tower stump represented the "private chamber" or "prayer room" of Prophet Dawud, which is specifically mentioned in the Koran (Surah 38. Sad, Ayah 21). Prophet Dawud is how King David is known in Islam. The Crusaders, who rebuilt the citadel to the south of Jaffa Gate, also built a gate behind the present location of Jaffa Gate, calling it "David's Gate".

The gate's location is determined by the city's topography. It stands at the point where the valley followed by Jaffa Road meets the city wall at the upper end of the Transversal Valley, which bisects the Old City in a roughly west–east direction, between the northwest ridge and the southern hill known as Mount Zion. Inside the city, the road (today's David Street) and the Transversal Valley it now follows continue eastward and down into the Central or Tyropoeon Valley, separating the city into a northern and a southern half, with the Christian and Muslim Quarters to the north, and Armenian and Jewish Quarters to the south.

In 1917, British general Edmund Allenby entered the Old City through the Jaffa Gate, giving a speech at the nearby Tower of David. Allenby entered the city on foot in a show of respect for the city and a desire to avoid comparison with the Kaiser's entry in 1898. In 1944 the British demolished the row of houses erected against the outer face of the city wall leading down to Jaffa gate from the north.

Immediately next to the old gate, which is used only by pedestrians, is a breach in the wall, through which the roadway passes. The breach in the wall was created in 1898 by the Ottoman authorities in order to allow German emperor Wilhelm II to enter the city triumphally. The breach and the ramp leading up to it are now allowing cars to access the Old City from the west. Photographs from circa 1870-1890 show that originally, the city wall was continuous at that point, but the upper level of the wall was lower owing to the fact that a moat ran around the Citadel / Tower of David, and the wall, at that point, was constructed from the bottom of the moat.

Therefore, even though the height of the wall was presumably the same at that point as the rest of the wall, and therefore provided the same level of protection from invaders, however, being that the ground level dipped at that point due to the moat, the top of the wall did not align with the rest of the wall. The aforementioned breach was made in 1898 when German Emperor Wilhelm II insisted on entering the city mounted on his white horse, or, according to some, in his carriage.

One local legend said that Jerusalem would be ruled by a king who entered the city's gates on a white horse, so to satisfy the emperor's vanity and avoid the fate foretold by legend, a breach was made in the wall rather than allow him to ride through a gate. At the same time, a portion of the moat was filled in, leaving the gap that allowed the Emperor to enter on his horse (or in his carriage).

Just inside the gate, behind an iron grating on the left, lie two tombs. These belong to two Ottoman-era notables, but a folk legend attributes them to the two architects whom Suleiman commissioned to construct the Old City walls. According to legend, when Suleiman saw that the architects had left Mount Zion and the tomb of King David outside of the enclosure, he ordered them executed. However, in deference to their impressive achievement, he had them buried inside the walls next to Jaffa Gate.