Damascus Gate (Arabic: باب العامود‎, Bāb al-ʿĀmūd, Hebrew: שער שכם‬, Sha'ar Sh'khem) is one of the main entrances to the Old City of Jerusalem. In its current form, the gate was built in 1537 under the rule of Suleiman the Magnificent, the Sultan of the Ottoman Empire.

Damascus Gate is flanked by two towers, each equipped with machicolations. In contrast to the Jaffa Gate, where stairs rise towards the gate, in the Damascus Gate, the stairs descend towards the gate. Until 1967, a crenellated turret loomed over the gate, but it was damaged in the fighting during the Six-Day War, it was restored in August 2011.

The gate opens onto Nablus Road, which leads to the city of Nablus (Neopolis to the Romans), and, eventually to Damascus. The gate was constructed upon the remains of ancient gates built since the Second Temple Period. The Romans built a gate here to mark the connection between the road to Neopolis and the Cardo, their main north-south road through Jerusalem. 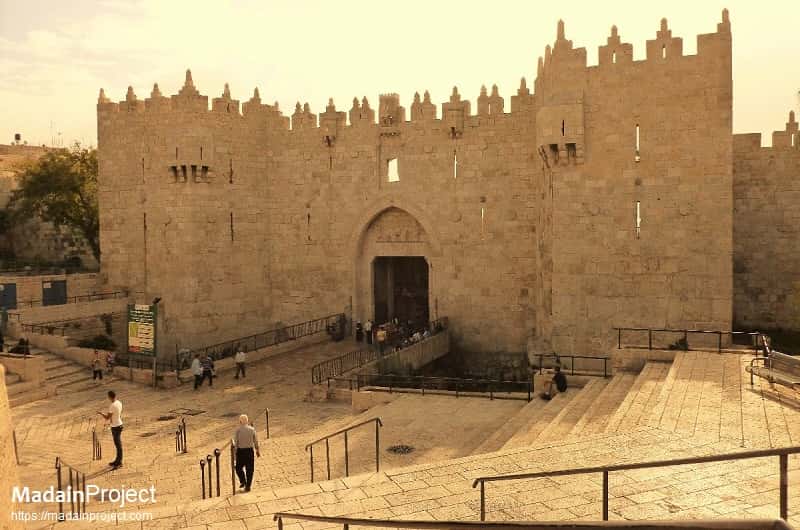 It is located along the northern wall, between Bab al-Zahira and Bab al-Jadid. It was one of eight gates rebuilt in the 10th century CE, Damascus Gate is the only one to have preserved the same name (i.e. Bab al-Amud) in modern times. The Crusaders called it St. Stephen's Gate (in Latin, Porta Sancti Stephani), highlighting its proximity to St. Stephen's Church. The Jews call it Sha’ar Schechem, or Nablus Gate. 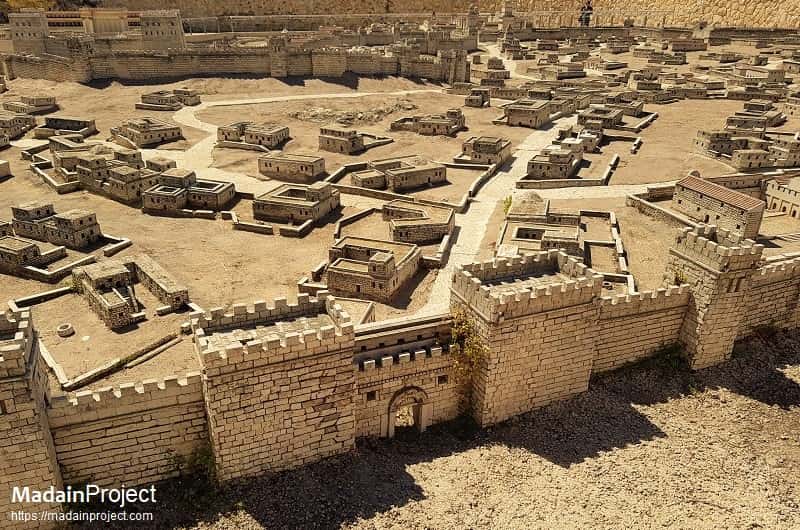 First Century Fish Gate
The modern Damascus Gate replaced an earlier entrance, probably the Fish Gate, to the old city of Jerusalem. The Fish Gate, mentioned in a the Book of Nehemiah, was a gate in the north wall of Jerusalem, probably a little to the east of the current location of Damascus Gate. It was the closest gate to the fish market, and it is believed that fishermen from the Sea of Galilee and the Jordan River, Jewish and Syrian alike, used this gate to bring fish to market. 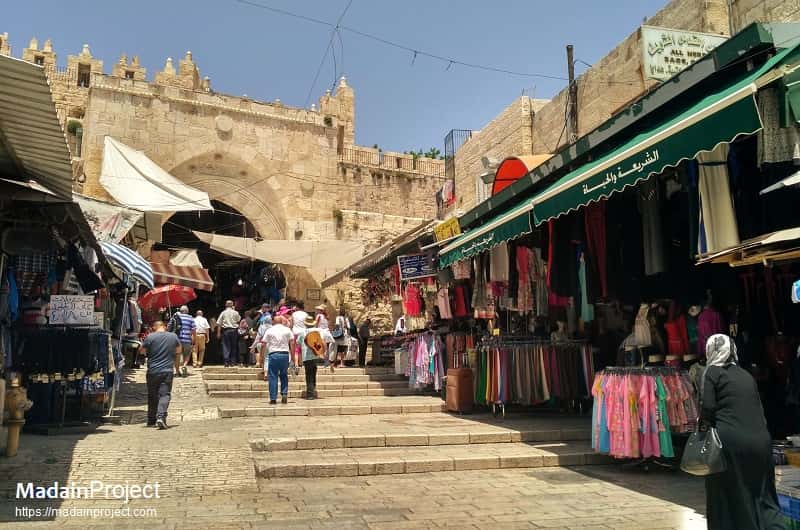 Arab Bazaar
It is located at the edge of the Arab bazaar and marketplace in the Muslim Quarter. The Arab bazaar street leads in to the city where the street splits in to two, al-Wad Street and Suq Khan al-Zeit. The Shurbaji Sebil is also located at this junction. Damascus Gate is the only Jerusalem gate to have preserved the same name since at least the 10th century (i.e. Bab al-Amud). The Crusaders called it St. Stephen's Gate (in Latin, Porta Sancti Stephani), highlighting its proximity to the site of martyrdom of Saint Stephen, marked since the time of Empress Eudocia by a church and monastery. 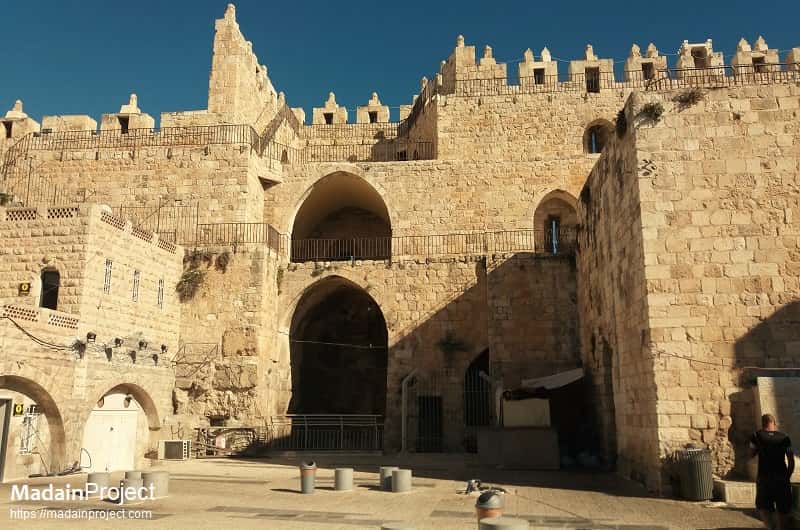 Interior Architecture
Interior of the western tower, both towers have pointed arches built with small stones in the Ottoman style. 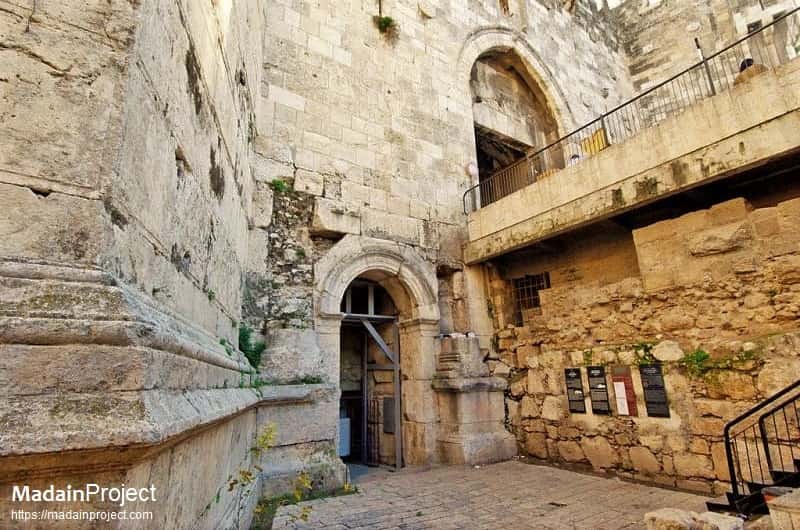 Roman Plaza and Gate
The remains of an earlier Roman gate & plaza can be seen, dating back to the time of the Roman Emperor Hadrian, who rebuilt the city 135 CE. Originally built as a free-standing triumphal gate it had three arches, today only the eastern most smaller arch remains and leads to the Roman Plaza. The Roman gate remained in use during the Early Muslim and Crusader period, but several storerooms were added by the Crusaders outside the gate, so that access to the city became possible only by passing through those rooms.

Hadrian's Gate
Hadrian's Roman gate circa 135 CE was built as a free-standing triumphal gate, and only sometime towards the end of the 3rd or the very beginning of the 4th century were there protective walls built around Jerusalem, connecting to the existing gate. In the square behind this gate stood a Roman victory column (illustration) topped by a statue of Emperor Hadrian, as depicted on the 6th-century Madaba Map. This historical detail is preserved in the current gate's Arabic name, Bab el-Amud (باب العامود), meaning "gate of the column". 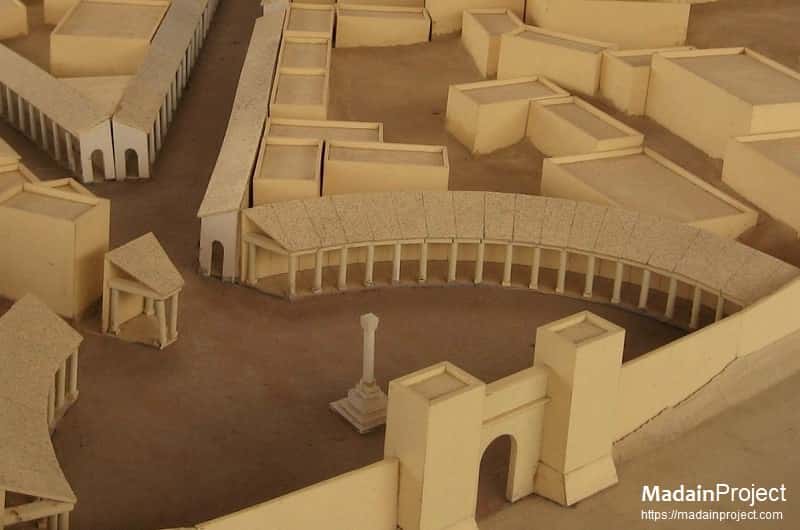 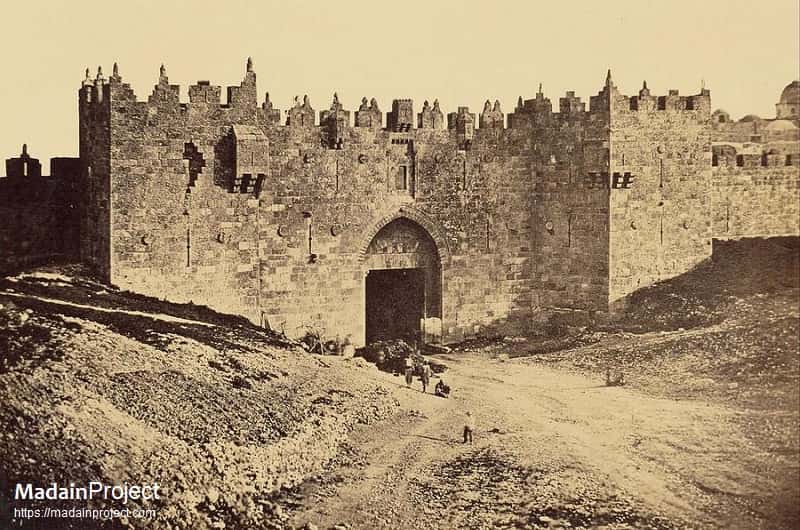 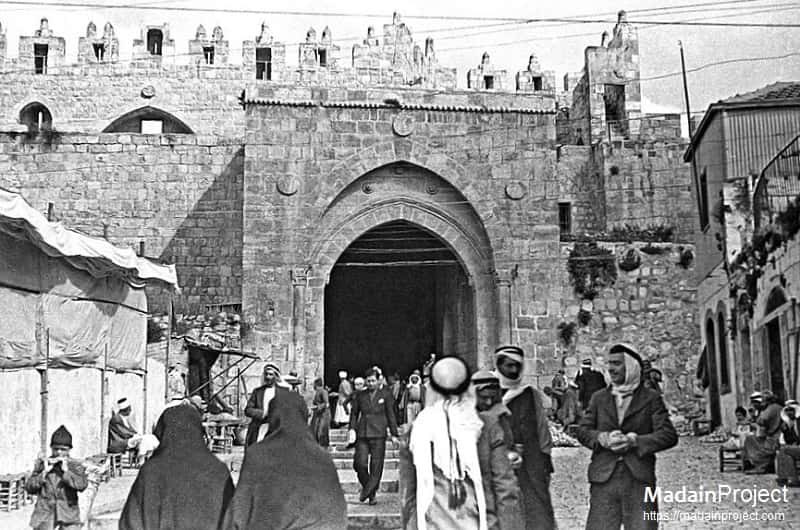