The Solomonic Fortifications refer to the biblical narrative of King Solomon's fortification building projects as mentioned in the first book of the Kings. While David was a king of war, Solomon was a king of peace. It fell to King Solomon to consolidate the kingdom that his father David had won by the sword. Part of this consolidation consisted in fortifying many of the cities of Israel. Four of these cities - Jerusalem, Hazor, Megiddo, and Gezer - are mentioned explicitly as fortress-cities by the Book of Kings.

Israel was situated on the "land bridge" which connected three continents and across which a major international trade route ran. This invited the kind of traffic through the neighborhood that could be dangerous. According to 1 Kings 9:15-19, in the interest of homeland security Solomon proceeded to strengthen Jerusalem's defenses and to build three major fortified bases from which his chariot forces could operate: Hazor, Megiddo and Gezer.

Millo and the Wall of Jerusalem
The texts also describe the Millo built by Solomon (1 Kings 9:24) and repaired by Hezekiah (2 Chronicles 32:4–5), without giving an explanation of what exactly the Millo was: there is therefore some debate among scholars as to the Millo's specific nature. Today it has been identified in the of the City of David excavations. The account of the forced labor which king Solomon levied to build the house of the Lord, and his own house, and Millo, and the wall of Jerusalem, and Hazor, and Megiddo, and Gezer." If Gezer, Megiddo, and Hazor were parts of the same building program as Jerusalem, we should see similar construction at Jerusalem as these other cities.

Hazor
The remains at Hazor show that during the Early Iron Age the town gained a highly distinctive six chambered gate, as well as a characteristic style to its administration buildings and fortifications; archaeologists determined that these constructions at Hazor were built by the same leadership. This dating correlates with the biblical narrative, that they were constructed in the tenth century by King Solomon as suggested by some archaeologists; others date these structures to the early 9th century BCE, during the reign of the Omrides.

Megiddo
Megiddo reached its peak under King Solomon in the 10th century BCE. He rebuilt it as a royal city, administering the northern part of the kingdom. During the reign of Solomon, Megiddo was surrounded by a sturdy casemate wall (two parallel walls with partitions between them, creating rooms). The casemates served as barracks for soldiers and for storage of equipment. A new city gate was constructed on the remains of the Canaanite gate in the northern part of wall. 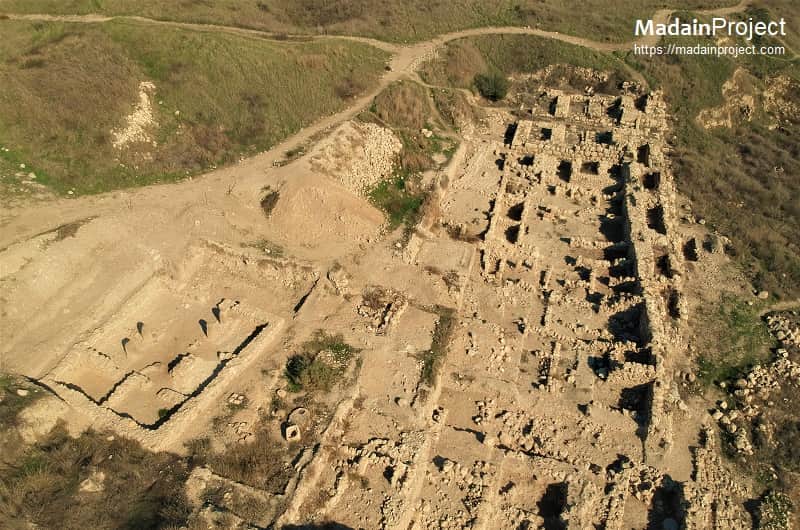 Gezer
At Tel Gezer, archaeologists have uncovered the remains of a huge, six-chambered gate complex, probably dating to Solomon's time 920 BCE. This once huge gate complex stands only 4-5 feet tall today. Although the gate is believed to have been built by the legendary King Solomon, the dating is still under debate. With the street pavement partially gone, one can see the exposed sewer channel. The sewer ran under the street, through the city, and into the valley beyond. Based on archaeological remains, the gatehouse at Gezer was over 45 feet wide, nearly 60 feet long, and contained three chambers on each side of the street.