Tel Hazor (תל חצור) also Hatzor (חצור) and Tell el-Qedah (تل القدح‎), is an archaeological tell at the site of ancient Hazor, located in Israel/Palestine, Upper Galilee, north of the Sea of Galilee, in the northern Korazim Plateau.

Word Hazor, from the original Hebrew, means an enclosure; the term may have been used to imply that the settlement was had defensive walls around it.

In the Middle Bronze Age (around 1750 BCE) and the Israelite period (ninth century BCE), Hazor was the largest fortified city in the country and one of the most important in the Fertile Crescent.

The first settlement excavated in Tel Hazor is dated to the Early Bronze Age II and III periods, existing at around the 28th and 24th centuries BCE. It was part of a system of settlements around the Hula Valley, including Abel Beth Maachah, Dan and Kedesh.

The Intermediate Bronze Age period, at the end of the 3rd millennium BCE, is a period of urban decline, separating the Early Bronze Age, which is the Levant's first urban era, from the re-urbanization of the region in the Middle Bronze Age. 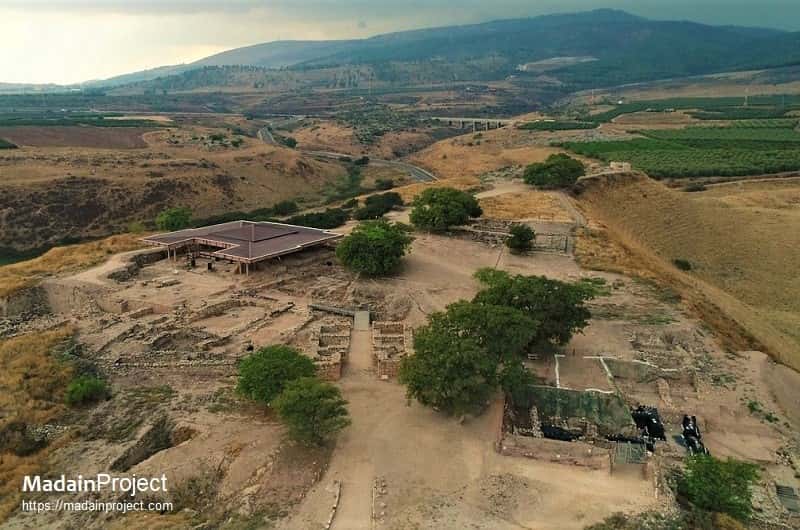 The Upper City of Hazor includes the Solomonic city gates, a restored Late Bronze Age temple, and the city acropolis. Mentioned in the Bible "And Joshua at that time turned back and took Hazor and smote the king thereof with the sword, for Hazor beforetime was the head of all those kingdoms." - Joshua 11:10. It is located some 40 meters above the south side of the valley. The size of the upper city is 100 Dunam (10 Hectares), and was protected by massive walls. This is the major part of the city, with the palaces and temples. Only this section is opened to the public.

The Solomonic gate is located in the center of the upper city, allowing entry in to the citadel from south-east direction. The gate is symmetric on both sides of the entrance, and is composed of two towers, three rooms within each tower, and two bastions projecting on both side. Dated to the 10th century BCE, this gate has six chambers and two towers. Similar gates have been uncovered at Megiddo, Lachish and Gezer. 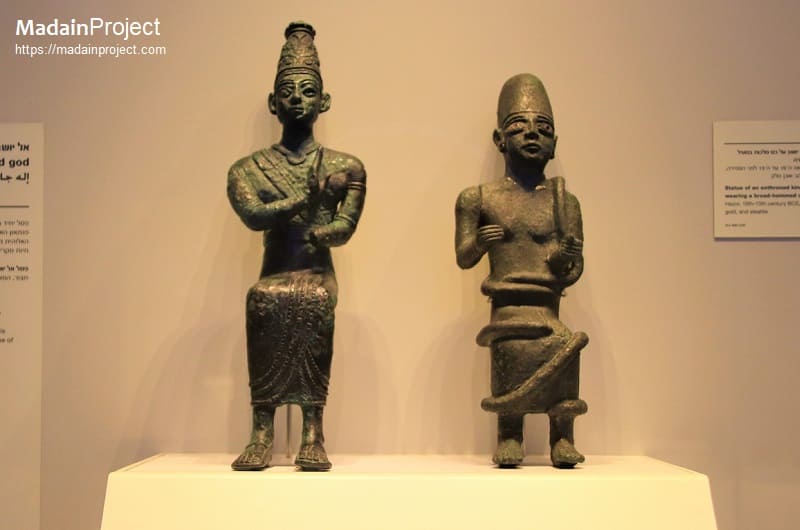 Bronze Statuettes of Enthroned God and King
The statue on the left depicts one of the major Canaanite gods - either El, head of the pantheon, or the storm god, responsible for fertility and growth. The god's divine status is indicated by his tall headdress, decorated in relief with a tree of life flanked by two horned animals. The smaller statue on the right depicts an enthroned king wearing a broad-hemmed cloak.

Head of an Ivory Figurine
Head made of ivory, found in the Ceremonial Precinct, Building 7050. Only part of this head, which may have belonged to an anthropomorphic statuette, remains, including the face, the left ear, the neck and part of the headdress. Its fragmentary state makes it difficult to establish whether it belonged to a standing or seated figure or perhaps even to a composite creature, such as a sphinx. It is most likely dated to the Late Bronze Age.

Fragment of Egyptian Statue
In a historic find, a large fragment of an Egyptian statue measuring 45 X 40 centimeters, made of lime-stone, was discovered In the course of the current season of excavations at Tel-Hazor, north of the Sea of Galilee in Israel. Only the lower part of the statue survived, depicting the crouching feet of a male figure, seated on a square base on which a few lines in the Egyptian hieroglyphic script are inscribed.

Hazor Fortress Gate
Made out of limestone, it may have belonged to a royal structure, possibly a fortress. Dated to the Iron Age (II), it was excavated in-situ at Tel Hazor, today displayed at the Israel Museum. This is the right half of a double gate that stood at the entrance to the fortress of Hazor in the time of King Ahab. It is built of finely hewn blocks and adorned with two carved capitals, which support a massive lintel.

Middle Bronze Age
During the Middle Bronze IIA (MBIIA; 1820-1550), Hazor was a vassal of Ishi-Addu of Qatna. During this period the settlement of Chatsôr was also mentioned in the Execration texts (also known as the proscription lists; the ancient Egyptian hieratic texts, listing enemies of the pharaoh). At Mari (Syria), on the Euphrates River, letters mention Hazor during the reigns of Yasmah-Adad and Zimri-Lim. Hazor is part of a trade route Hazor-Qatna-Mari.

Late Bronze Age
During the Egyptian Second Intermediate Period and early New Kingdoms (together running between 18th and 13th century BCE), Canaan was an Egyptian vassal state. The 14th century BCE documents, from the El-Amarna, describe the king of Hazor (in Amarna letters called Hasura), Abdi-Tirshi, as swearing loyalty to the Egyptian pharaoh. According to the biblical Books of Joshua and Judges, Hazor was the seat of Jabin, a powerful Canaanite king who led a Canaanite confederation against Joshua, and subsequently defeated. One archaeological stratum dating from around 1200 BCE shows signs of catastrophic fire. The city also show signs of having been a magnificent Canaanite city prior to its destruction.

Iron Age (Israelite Hazor)
Also known as the Israelite period, the archaeological remains from this period suggest that after its destruction, the city of Hazor was rebuilt as a minor village within "the territory of Naphtali" (Joshua 19:36). According to the Books of Kings, the town, along with Megiddo, and Gezer, was substantially expanded and fortified by Solomon.

Like Megiddo and Gezer, the remains at Hazor show that during the Early Iron Age the town gained a highly distinctive six chambered gate, as well as a characteristic style to its administration buildings; archaeologists determined that these constructions at Hazor were built by the same leadership as those at Megiddo and Gezer. Some archaeologists conclude that they were constructed in the tenth century BCE by the King Solomon; others date these structures to the early 9th century BCE, during the reign of the Omrides.

Archaeological remains indicate that towards the later half of the 9th century BCE, when the king of Israel was Jehu, Hazor fell into the control of Aram Damascus. Some archaeologists suspect that subsequent to this conquest Hazor was rebuilt by Aram, probably as an Aramaean city. When the Assyrians later defeated the Aramaeans, Hazor seemingly returned to Israelite control; Assyrian records indicate that Joash, king of Israel at the time, had paid tribute to Assyria and Israel had become an Assyrian vassal. Subsequently, the town, along with the remainder of the kingdom of Israel, entered a period of great prosperity, particularly during the rule of Jeroboam II. Some archaeologists attribute the later large scale constructions at Hazor, Megiddo, and Gezer, including the rock cut water supply systems, to this era.

Israel's attempted rebellion against Assyrian domination resulted in an invasion by the forces of the Assyrian ruler, Tiglath-Pileser III; the evidence on the ground suggests that hasty attempts were made to reinforce the defenses of Hazor. Despite the defences, in 732 BCE Hazor was captured, its population deported, and the city was burnt to the ground.