Pyramid Complex of Khafra is an archaeological site in Giza Pyramid Complex. It includes the Pyramid of Khafre, remains of the Mortuary Temple, Sphinx, Valley Temple along a few others.

The Pyramid of Khafre or of Chephren is the second largest pyramid at Giza and in Egypt was built for Khafre, the third pharaoh of the 4th Dynasty during the Old Kingdom Period of Ancient Egypt around 2540 BCE. Khafre, also known in history by the Greek name Chephren, was the son of Khufu, who is the Great Pyramid and the grandson of Sneferu, another great builder of Ancient Egypt. Khafre lived during the ‘golden age’ of the Old Kingdom. The pyramids built by him and his family were the greatest in the history of Egypt and some of the greatest achievements in human history. 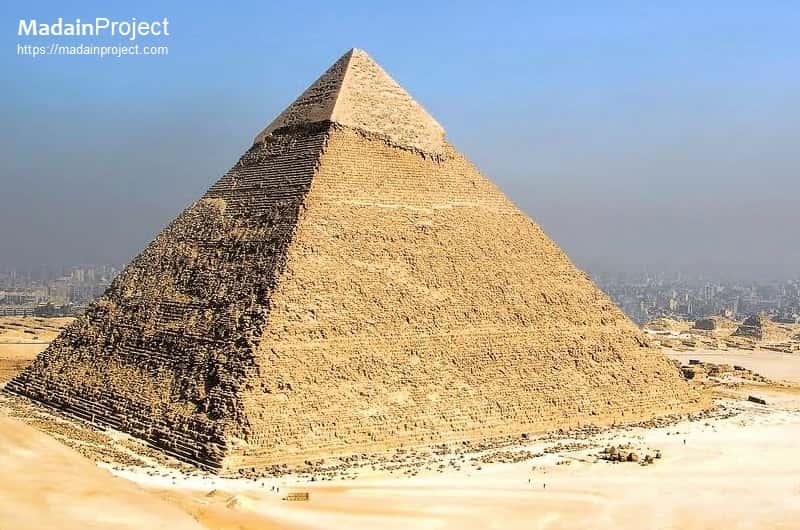 The remains of the mortuary temple, now largely in ruins, sit to the east of the pyramid. It is larger than previous temples and is the first to include all five standard elements of later mortuary temples: an entrance hall, a columned court, five niches for statues of the pharaoh, five storage chambers, and an inner sanctuary. The mortuary temple of Khafre was made in an organized way and it was comprised of an entrance hall, an open courtyard with some large pillars, five niches off the second chamber of the temple where probably the statues of the Pharaoh were placed, five storerooms behind these five niches and finally an innermost sanctuary that contained a pair of stelae.

The Great Sphinx of Giza probably built out of a rock formation used to cut the blocks for the pyramid itself along with Sphinx Temple, may have been part of the Khafra's Pyramid complex. Later on during the Middle Kingdom another temple was built, dedicated to the Sphinx. The colossal limestone statue, that likely dates from the reign of King Khafre (c. 2575–c. 2465 BCE) and depicts his face. It is one of Egypt’s most famous landmarks and is arguably the best-known example of sphinx art.

The Valley Temple is built of megalithic blocks sheathed in red granite, and is very similar to the Mortuary Temple. The square pillars of the T-shaped hallway were made of solid granite, which is remarkably well preserved, and the floor was paved in alabaster. The exterior made of limestone is much more weathered. This valley temple was part of the funerary complex including along with the pyramid (with its burial chamber) a mortuary temple (joining the pyramid on its east side), and a covered causeway leading to the valley temple.

A causeway runs 494.6 metres between the Pyramid Valley Temple of Khafre and the Mortuary Temple near the Pyramid. One would assume that the beginning of the causeway should reflect the entry to the Mortuary Temple and its egress to the pyramid, so as to allow access to it by the procession. The ramp was originally covered and may have been beautifully decorated with bas-reliefs. The ramp runs obliquely to the south-east.

Satellite Pyramid GIIa along the centerline of the pyramid on the south side. Almost nothing remains other than some core blocks and the outline of the foundation. It contains two descending passages, one of them ending in a dead end with a niche which contained pieces of ritualistic furniture.