The Great Pyramid of Giza (also known as the Pyramid of Khufu or the Pyramid of Cheops) is the oldest and largest of the three pyramids in the Giza pyramid complex bordering what is now el Giza, Egypt.

Originally, the Great Pyramid was covered by limestone casing stones that formed a smooth outer surface; what is seen today is the underlying core structure. Some of the casing stones that once covered the structure can still be seen around the base. There have been varying scientific and alternative theories about the Great Pyramid's construction techniques. Most accepted construction hypotheses are based on the idea that it was built by moving huge stones from a quarry and dragging and lifting them into place. 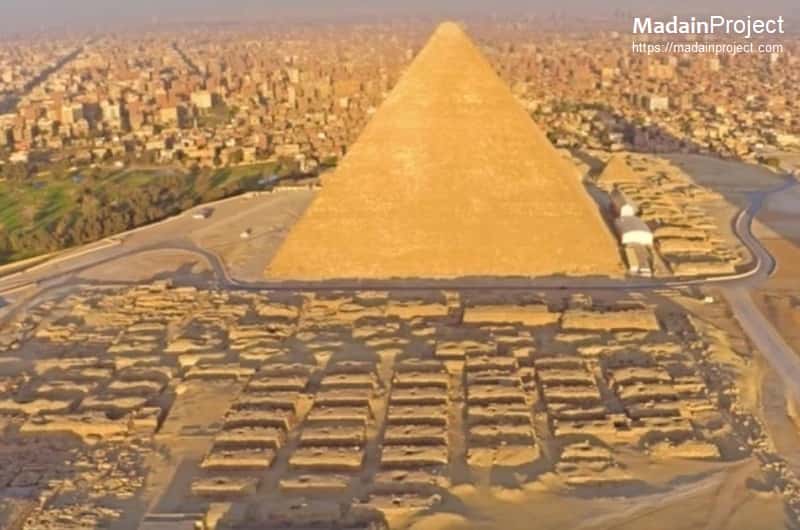 Some Egyptologists believe that the pyramid was thus built as a tomb over a 10-20-year period concluding around 2560 BCE. Initially standing at 146.5 metres (481 feet), the Great Pyramid was the tallest man-made structure in the world for more than 3,800. The Great Pyramid consists of an estimated 2.3 million blocks which most believe to have been transported from nearby quarries. Many alternative, often contradictory, theories have been proposed regarding the pyramid's construction techniques.

Robbers's Tunnel
The Robbers' Tunnel that provides entrance to the interior today was purportedly created around 820 CE by Caliph al-Ma'mun's workmen using a battering ram. The tunnel is cut straight through the masonry of the pyramid for approximately 27 metres (89 ft), then turns sharply left to encounter the blocking stones in the Ascending Passage. It is believed that their efforts dislodged the stone fitted in the ceiling of the Descending Passage to hide the entrance to the Ascending Passage and it was the noise of that stone falling and then sliding down the Descending Passage, which alerted them to the need to turn left.

Grand Gallery
The Grand Gallery continues the slope of the Ascending Passage, but is 8.6 metres (28 ft) high and 46.68 metres (153.1 ft) long. It is speculated that it was used to lift stones to the upper levels of the structures by means of counter weights and pullys. The floor of the Grand Gallery consists of a shelf or step on either side, 51 centimetres (20 in) wide, leaving a lower ramp 1.04 metres (3.4 ft) wide between them. Fragments of granite found by Petrie in the Descending Passage may have come from these now-vanished doors.

King's Chamber
A granite chamber measuring 10.47 metres from east to west and 5.234 metres from north to south. The only object in the King's Chamber is a rectangular granite sarcophagus. The King's Chamber is entirely faced with granite. The sarcophagus is slightly larger than the Ascending Passage, which indicates that it must have been placed in the Chamber before the roof was put in place. Unlike the fine masonry of the walls of the Chamber, the sarcophagus is roughly finished, with saw-marks visible in several places. 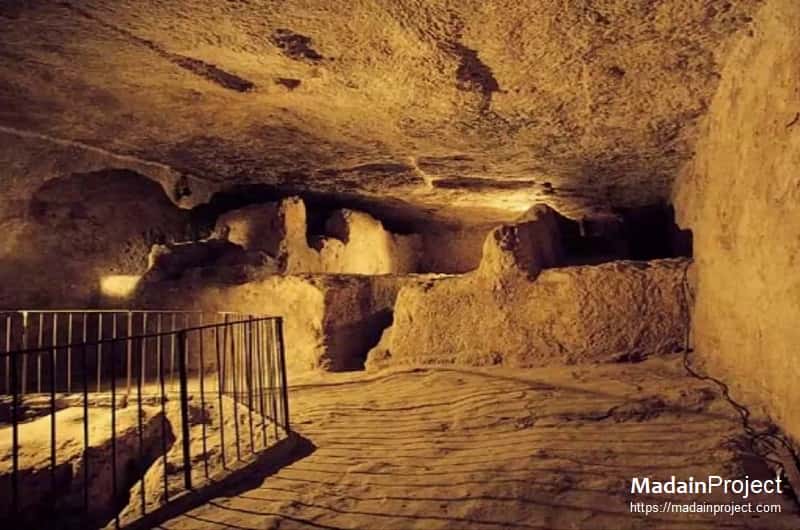 Subterranean Chamber
This bare and unfinished cavern, inaccessible today, has an enigmatic pit dug into its floor and serves as the starting point for a small, cramped tunnel of unknown purpose that dead-ends in the bedrock. This unfinished subterranean chamber, an unfinished chamber within Khufu's Pyramid, lies 90 feet (30 meters) below the surface of the plateau, and is closed to the public. Standing alone inside this oxygen-deficient space is quite an experience; 2.3 million blocks of stone weighing some 6.5 million tons loom overhead. Workers down here chipped away at the limestone bedrock to build what is thought to be the original burial chamber for King Khufu. Egyptologists believe the chamber is 'unfinished' because Khufu suddenly decided he wanted his burial chamber to be higher in the pyramid, and ordered the workers to stop. Khafre's Pyramid follows a similar pattern, with an unfinished subterranean burial chamber.