The Pyramid of Khafre or of Chephren is the second-tallest and second-largest of the Ancient Egyptian Pyramids of Giza and the tomb of the Fourth-Dynasty pharaoh Khafre (Chefren), who ruled from c. 2558 to 2532 BCE.

The Pyramid of Khafre or of Chephren is the second-tallest and second-largest of the Ancient Egyptian Pyramids of Giza and the tomb of the Fourth-Dynasty pharaoh Khafre (Chefren), who ruled from c. 2558 to 2532 BCE. The pyramid has a base length of 215.5 m (706 ft) and rises up to a height of 136.4 metres (448 ft). It is made of limestone blocks weighing more than 2 tons each. The slope of the pyramid rises at a 53° 13' angle, steeper than its neighbor, the Pyramid of Khufu, which has an angle of 51°50'24". Khafre's pyramid sits on bedrock 10 m (33 ft) higher than Khufu's pyramid, which makes it appear to be taller.

The pyramid was likely opened and robbed during the First Intermediate Period. During the Nineteenth Dynasty, the overseer of temple construction took casing stones to build a temple in Heliopolis on Ramesses II's orders. Arab historian Ibn Abd al-Salam recorded that the pyramid was opened in 1372 CE. On the wall of the burial chamber, there is an Arabic graffito that probably dates from the same time.

The first complete exploration was conducted by John Perring in 1837. In 1853, Auguste Mariette partially excavated Khafre's valley temple, and, in 1858, while completing its clearance, he managed to discover a diorite statue (inspect) of Khafre. Casing stones cover the top third of the pyramid, but the pyramidion and part of the apex are missing.

The pyramid is built of horizontal courses. The stones used at the bottom are very large, but as the pyramid rises, the stones become smaller, becoming only 50 cm (20 in) thick at the apex. The courses are rough and irregular for the first half of its height but a narrow band of regular masonry is clear in the midsection of the pyramid. At the northwest corner of the pyramid, the bedrock was fashioned into steps. 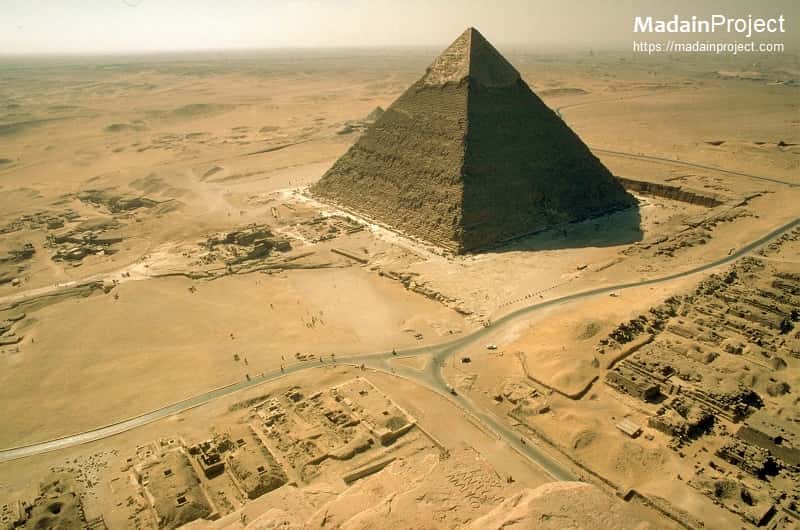 Like the Great Pyramid, a rock outcropping was used in the core. Due to the slope of the plateau, the northwest corner was cut 10 m (33 ft) out of the rock subsoil and the southeast corner is built up. The pyramid was first explored in modern times by Giovanni Belzoni on March 2, 1818, when the original entrance was found on the north side. Belzoni had hopes of finding an intact burial but the chamber was empty except for an open sarcophagus and its broken lid on the floor. As was popular with early explorers, Belzoni prominently recorded his name in the Burial Chamber, this defacement can still be seen today: “Scoperta da (Discovered by) G. Belzoni. 2. Mar. 1818.”

The bottom course of casing stones was made out of pink granite but the remainder of the pyramid was cased in Tura Limestone.

The burial chamber was carved out of a pit in the bedrock. The roof is constructed of gabled limestone beams. The chamber is rectangular, 14.15 m by 5 m (46.4 ft x 16 ft), and is oriented east-west. Khafre's sarcophagus was carved out of a solid block of granite and sunk partially in the floor, in it, Belzoni found bones of an animal, possibly a bull. Another pit in the floor likely contained the canopic chest, its lid would have been one of the pavement slabs. Unlike the Great Pyramid of Khufu, the entrance to the burial chamber (inspect) is not low, rather it is on the same level as the preceeding passage.

There is a subsidiary chamber, equal in length to the c.412"-long King's Chamber of the Khufu pyramid, that opens to the west of the lower passage, the purpose of which is uncertain. It may be used to store offerings, store burial equipment, or it may be a serdab chamber. The upper descending passage is clad in granite and descends to join with the horizontal passage to the burial chamber. This chamber has a pointed rook and may then have performed the same function as the Queens chamber of the great pyramid (which also had a pointed roof) but unlike it there is no niche in the wall.

Close examination reveals that the corner edges of remaining casing stones are not completely straight, but are staggered by a few millimeters. One theory is that this is due to settling from seismic activity. An alternative theory postulates that the slope on the blocks was cut to shape before being placed due to the limited working space towards the top of the pyramid.

The lower descending passageway (pictured here) is carved completely out of the bedrock, descending, running horizontal, then ascending to join the horizontal passage leading to the burial chamber.