Temples of Great Sphinx of Giza

There are at least two temples associated with the Great Sphinx of Giza, one dates back to the Old Kingdom (circa 2686–2181 BCE) and second is from the New Kingdom (circa 1600-1070 BCE). Some early Egyptologists and excavators of the Giza pyramid complex believed the Great Sphinx and associated temples to predate the Fourth Dynasty rule of Khufu, Khafre, and Menkaure. 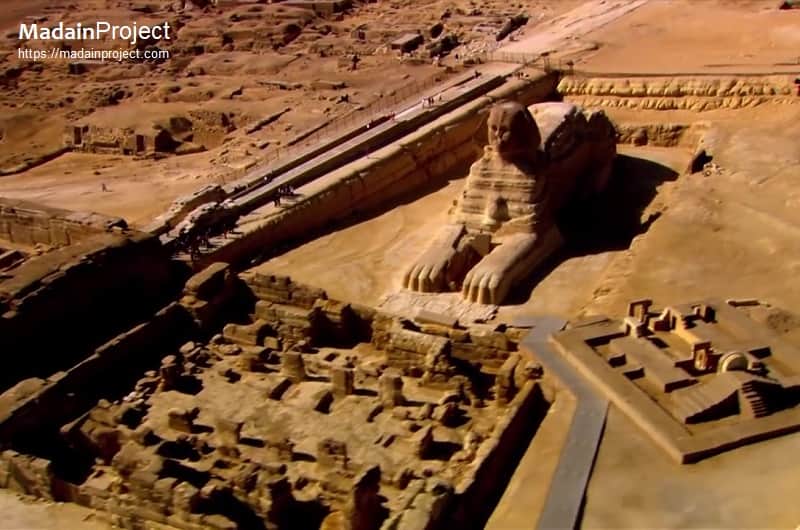 The older (old Sphinx Temple) of the two sits directly in front of the Sphinx, to the south, and is dated to the Old Kingdom of ancient Egypt; the second lies to the north-east of the Sphinx and is dated back to the New Kingdom. In the New Kingdom, the Sphinx became more specifically associated with the sun god Hor-em-akhet and its importance and ritual practices were revived. The Great Sphinx is, like many other monuments in Egypt, a complex, consisting of several associated structures, rather than simply a single colossal statue.

In the Great Temple of Sphinx, (larger of the two temples) from the Old Kingdom, the core blocks are generally of the same poorer quality and more easily eroded limestone as the body of the Sphinx. Thus these temple can be regarded as contemporary with the carving of the monument. It should also be noted that the same core blocks also make up Khafre's lower, or valley temple, and thus place it, the Sphinx and the Sphinx temple in the same date range.

The smaller New Kingdom Sphinx temple sits on a small rise to the north-east of the Great Sphinx. Built by Amenhotep II, it was only a part of a number of building projects, including terraces, enclosures, rest houses and temples the formed almost a royal national park about the Sphinx during the New Kingdom. The temple of Amenhotep II, situated on the higher terrace northeast of the Sphinx, was built during the first year of his reign.