An octagonal Byzantine martyrium structure was built in first century CE is on the purported site of Saint Peter's house. According to the excavators, the central hall of this church was originally built as part of a residential structure about the beginning of the Early Roman period, around 63 BCE. Although it is not mentioned specifically where in Capernaum Isa (Jesus) stayed, the fair inference seems to be that he lived at Peter’s house which was fairly close to the Capernaum Synagogue.

The octagonal church built over the purported St. Peter's house. Later on in 1990 CE a church of modern pilgrimage church was built over the remains of the ancient temples. Excavations before the modern memorial Church was built over these in 1990s. According to Corbo and Loffreda, a room in the house was already singled out in the late 1st century CE, in the following manner: Alone among the village's dwellings at that time, it received a succession of floors made of crushed and beaten limestone.

The main entrance to the church, inside the apse of the octagonal church the immersion baptismal basin was made with steps for the entry and exit of the baptized. The room which later turned in to the church or venerated room was built on a level of fill containing pottery from the 1st century BCE. In the 4th century, if not earlier, pilgrims approached the venerated room through an eastern door into a courtyard. This entrance was on the east off the main north-south street of the village, which stretched from the area of the synagogue down to the lake

An aerial view of the 1st century CE church remains, which was most likely converted from St. Peter's house. with part of the 4th century (illustration). The synagogue is in the upper-left corner. Some of the foundations of the original structure can also be seen. The three concentric octagons form the walls of the octagonal church of the late 5th century. The central octagon had eight pillars, another outer octagon, and a portico that led both into the interior of the church as well as into a complex of related buildings.

The plastered floor of the inner room, or the large room, later Domus Ecclesia. In the 4th century, the room was enlarged and a central arch was added (illustration), the supporting ends of which can still be seen. The room was now the focal center of a house-church, perhaps the one built by Joseph. By 450 CE - to judge from "the hundreds of dishes stamped on the bottom with crosses" that were also found all over the site. 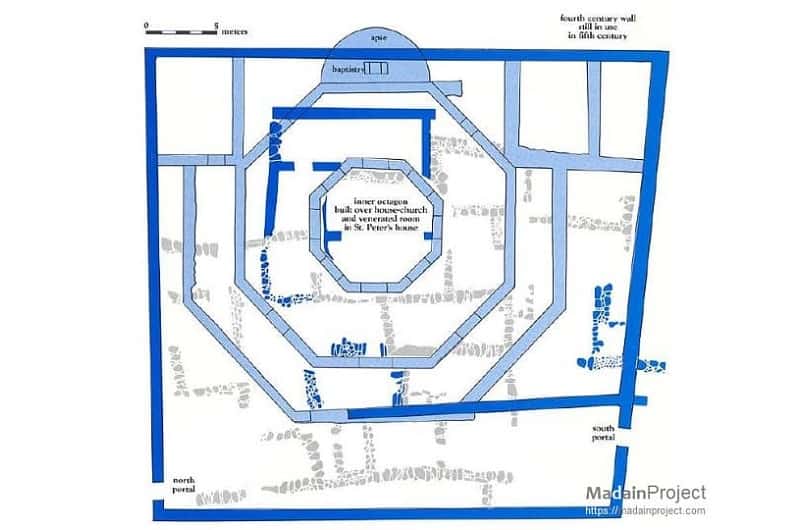 Buried (dark blue outine) beneath the remains of an octagonal Byzantine martyrium church (light blue outine), Italian excavators found the ruins of a rather mundane dwelling dating to the first century BCE. Although slightly larger than most, the house was simple, with coarse walls and a roof of earth and straw. Like most early Roman-period houses, it consisted of a few small rooms clustered around two open courtyards.

The closing wall of the sacred area built in the fourth century and also used for the Octagonal Church of the fifth century, the modern Pilgrimage Church of St. Peter in Capernaum is also partially visible over the ruins. In the 5th century, the walls of the house-church were "knocked down and buried," replaced by an ornate church of white limestone (like the nearby synagogue from this time).

Wall of the outer ambulatory of the Octagonal Byzantine Church with one of the white limestone thresholds. Its octagonal shape resembled that of churches commemorating an important event. It was formed by three concentric octagons on three levels rising toward the center. From the east side projected an apse, which housed a baptismal font probably intended for newly converted pilgrims.

Mosaic lacerto. The octagon was paved with refined mosaics like this one with peacock symbolizing the resurrection with a strip of flowers, schools of fish with small flowers around it, in the remains of the fourth and fifth century church of Saint Peter in Capernaum. After having been removed from its original location, the mosaics remained on display in the archaeological park in Capernaum until 2012, the year in which it was possible to begin its restoration.