The Sea of Galilee Boat, also known as the Jesus Boat, was an ancient fishing boat from the 1st century CE (the time of Jesus), discovered in 1986 on the north-west shore of the Sea of Galilee in Israel/Palestine. There is no evidence connecting the boat to Jesus or his disciples.

The 'Sea of Galilee Boat' housed in the Yigal Alon Museum in Kibbutz Ginosar. The remains of the boat, 27 feet (8.27 meters) long, 7.5 feet (2.3 meters) wide and with a maximum preserved height of 4.3 feet (1.3 meters), first appeared during a drought, when the waters of the Sea (actually a great fresh-water lake) receded. The boat's construction conforms to other boats constructed in that part of the Mediterranean during the period between 100 BCE and 200 CE. 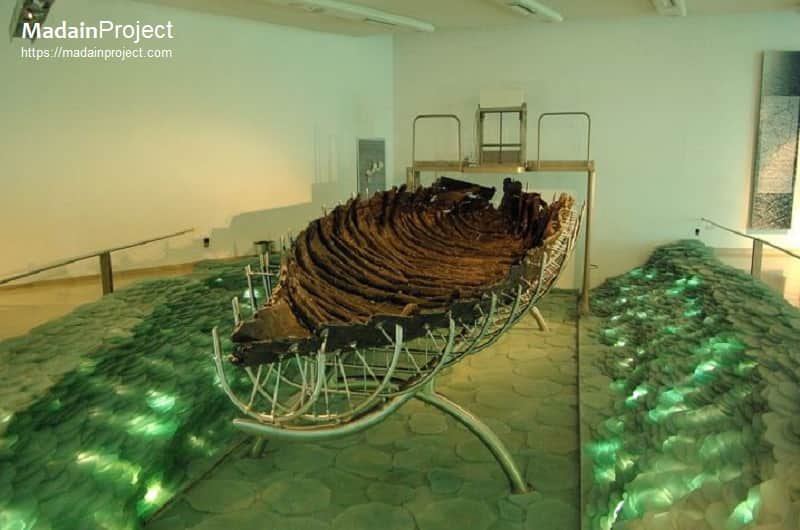 Constructed primarily of cedar planks (inspect) joined together by pegged mortise and tenon joints (illustration) and nails, the boat is shallow drafted with a flat bottom, allowing it to get very close to the shore while fishing. However, the boat is composed of ten different wood types, suggesting either a wood shortage or that the boat was made of scrap wood and had undergone extensive and repeated fixes. The boat was row-able, with four staggered rowers, and also had a mast allowing the fishermen to sail the boat.

The remains of the Ancient Galilee Boat were found by brothers Moshe and Yuval Lufan, fishermen from Kibbutz Ginnosar. The brothers were keen amateur archaeologists with an interest in discovering artifacts from Israel/Palestine's past. In 1986 when drought reduced the water-level of the lake, the two brothers examined the newly exposed beach and stumbled across the remains of the boat buried in the shore.

The brothers reported their discovery to the authorities who sent out a team of archaeologists to investigate. Realising that the remains of the boat were of tremendous historical importance archaeological dig followed, undertaken by members of Kibbutz Ginosar, the Israel Antiquities Authority, and numerous volunteers.

Excavating the boat from the mud without damaging it, quickly enough to extract it before the water rose again, was a difficult process which lasted 12 days and nights. The ancient wood was extremely fragile when exposed to the atmosphere and the boat had to be rescued from the place it was found by wrapping it in a mantle of fiberglass and insulating foam, which helped with both keeping it together, and floating it to its new location.

Items found on the boat include oil lamp (left), cooking pot (center), nails and hooks (right). The boat has been dated to 40 BC (plus or minus 80 years) based on radiocarbon dating, and 50 BCE to 50 CE based on pottery (including a cooking pot and lamp) and nails found in the boat, as well as hull construction techniques. Boats such as this played a large role in Jesus' life and ministry, and are mentioned 50 times in the Gospels, though there is no evidence connecting the Sea of Galilee Boat itself directly to Jesus or his disciples.

Although the use of such boats was common by the Jewish people in the first century CE for both fishing and transportation across the lake, but previously only references made by Roman authors, the Bible and mosaics like this one had provided archaeologists insight into the construction of these types of vessels. The discovery of the Magdala Boat Mosaic (also the Duc in Altum Boat Mosaic) mosaic is now displayed at Capernaum, about 6 1/2 miles northeast of Magdala. It depicts a boat with a mast for sailing and oars for rowing. Apparently it was designed for a crew of four rowers and a helmsman controlling a rudder (the larger third “oar” at the stern).