The King Faisal Street HaMelech Faisal in Hebrew or طريق الملك فيصل in Arabic, is a narrow street in the Muslim Quarter of Jerusalem. Named after the King al-Faisal of Jordan, it connects the Bab Faisal (located north) of Haram al-Sharif to the Derech Sha'ar HaArayot (Lion's Gate street).

The King Faisal Street Sign. It is one of the narrowest street of the old city of Jerusalem and like other street, it also is designed for the pedestrian traffic.

King Faisal street junction at the Derech Sha'ar HaArayot. After emerging on to the Lions' Gate street the pathway leads to the Lions' Gate (right) to the east and Ecce Homo convent (left) to the west on to the via Dolorosa. Most notable point of interest on this street is temporary location of The Centre for Jerusalem Studies, al-Quds University.

King Faisal Gate
The King Faisal Gate (باب الملك فيصل), also known as the Bab al-'Atim from within the Temple Mount, looking north. This gate emerges on the Malik Faisal Street. The street has a total length of 180 meters approx. This gate is also known as the Bab al-Atim/'Atm/Attim (Gate of Darkness). It is the closest gate to Sebil Suleimani, inside the al-Aqsa complex. 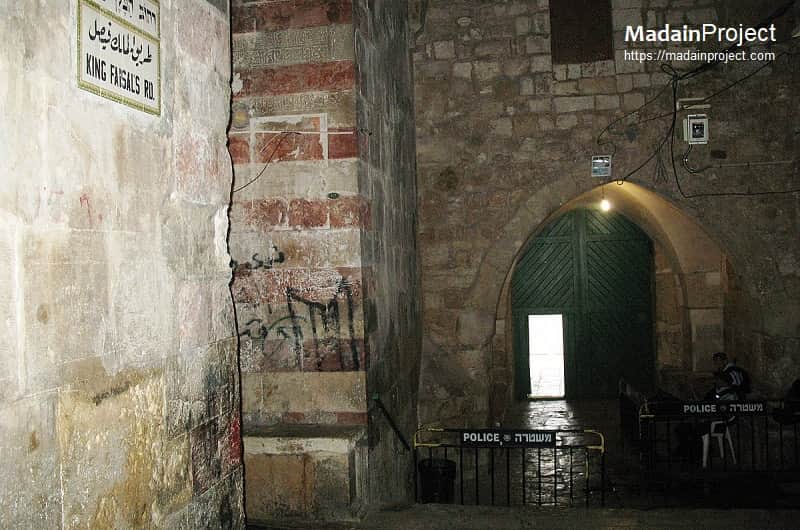 The Bab al-'Aatam [the Dark Gate] is located at the center of the northern wall of the blessed al-Aqsa Mosque. One of three gates on the north side, the gate spans 4 meters high and its entrance is rectangular with an arched top. It was most likely built during the Umayyad period. It was refurbished in the Ayyubid period and during the reign of King Issa in the 610 Hijra, 1213 CE.