The Diakonikon Baptistery, also spelled as diaconicon from Greek διακονικόν, is a sacristy on the south side of the ancient basilica of Mount Nebo. In Eastern Orthodox and Eastern Catholic churches on the right side of the central apse of the church, where the vestments, books, etc., that are used in the Divine Services of the church are kept.

In August 531 CE the Diakonikon Baptistery was built to the south of the courtyard against one of the funeral chapels. It was reached by a short flight of stairs, as it was one meter lower than the floor of the courtyard. The three apsed cella (cella trichola) of the Memorial Church of Moses was preceded by a courtyard.

The Diakonikon Baptistery (locate) inside the the rebuilt basilica houses several remains of antique mosaics but the masterpiece is a hunting and herding scene. The modern chapel presbytery, builty to protect the site and provide worship space, houses the remnants of of mosaic floors from different periods.

In the 6th century (circa 530 CE), the Memorial Church of Moses was enlarged and transformed into a basilica with a sacristy and new baptistery (the surviving mosaic dates to this period). Soon the church was the heart of a large monastery complex and pilgrimage center that would thrive for nearly six centuries.

The Diaconicon Baptistry and the adjacent funerary chapel was dismanteled in late sixth or early seventh century, the floor was raised to match the other parts of the building and a new mosaic was laid in the new flooring. Over the threshold at the entrance of the baptistery, was a welcoming inscription, "Peace to All", placed to greet visitors entering the chapel.

Layout
The rectangular chapel of the baptistery is oriented east-west, with the altar towards the east (south-east to be specific).

It is believed that it was a central place where the priests could wash themselves and holy articles, as well as a storage area for pertinent books and other objects precious to them. This area might have wooden shelves to hold the book collection of the monastery.

Baptismal Font
The baptismal stone fountain is fashioned in the form of a cross and coated with a thick layer of time plaster. The cross-shaped baptismal font was discovered near the western end of the hall. On three sides there are steps while at the southern arm of the cross there is a semicircular tub instead.

The spaces between the arms are decorated with four different mosaic knots of complex geometric design. One of them shows a bunch of grapes in the center. A fish scale design mosaic with flower buds decorates the floor around three sides of the font.

Central Mosaic
The central mosaic of the Diakonikon Baptistery with its hunting and pastoral scenes of colourful almost intact tesserae is one of the most remarkable Byzantine mosaics in Jordan. The largest of the mosaics in the diaconicon baptistery, it is interspersed with an assortment of African fauna, including a zebu (humped ox), lions, tigers, bears, boars, zebras, an ostrich on a leash and a camel-shaped giraffe. It was discovered in 1976 by Fr. Michele Piccirillo in the northern hall of the Moses Basilica, below a simple mosaic floor. A cross-shaped baptismal font was also discovered on the eastern end of the hall. 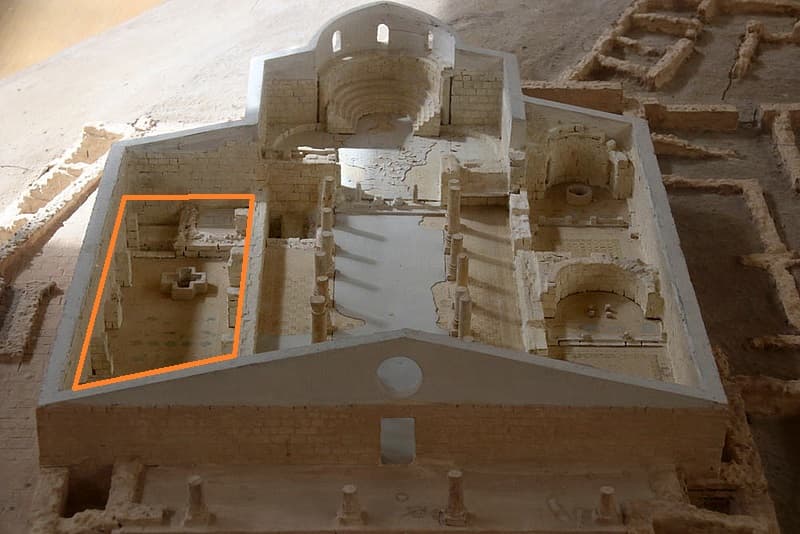