The Memorial Church of Moses (كنيسة موسى جبل نيبو), also known as the Maqam Nabi Musa (مقام النبي موسى), is a historic church atop the Mount Nebo, an elevated ridge of the Abarim in Jordan. Originally built in the second half of the 4th century CE on the site, where according to the Hebrew Bible Moses was granted a view of the Promised Land and according to a few Islamic scholars Musa was buried.

Although, traditionally it is believed to be the burial site of Moses according to some traditions, there is another grave that is also said to be that of Musa (Moses) 11km south of Jericho.

The modern building of Moses' Memorial Church atop Mount Nebo, in Khirbet al-Mukhayyat. It houses some of the best (and best presented) mosaics in Jordan, dating from around 530 CE. The church is part of a functioning monastery, and there's a small but fascinating museum presenting the history of the site.

The church is first mentioned in an account of a pilgrimage made by a lady Aetheria (Egeria), circa 390 CE. 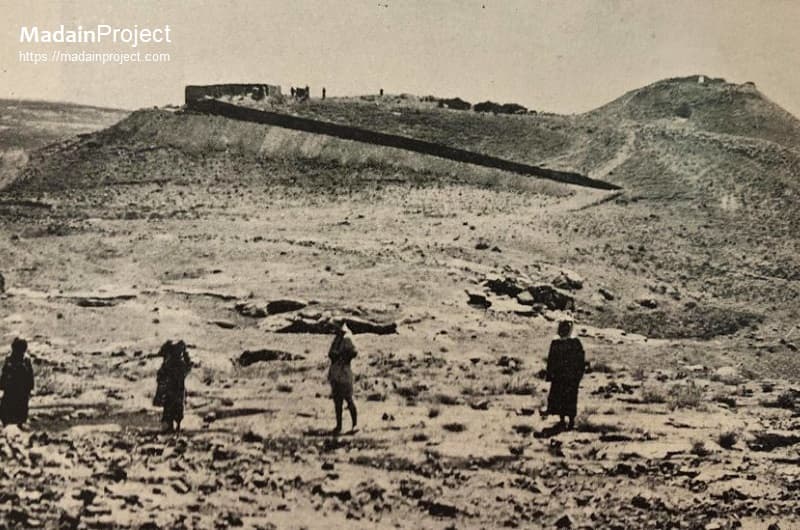 The church was first constructed in the second half of the 4th century to commemorate the place of Moses' death. It was enlarged in the late fifth century CE and rebuilt in 597 CE.

The church was abandoned by the 16th century and was rediscovered only in the mid-19th century, using 4th- and 5th-century pilgrim travelogues.

Modern exploration of the site began in 1863 with a brief visit by Félicien De Saulcy, who is generally credited with being the first to record the name, Khirbet al-Mukhayyat (De Saulcy 1865, I: 289-296). The Franciscans bought the site in 1932 and were responsible for excavating most of the ruins of the church and the monastery, as well as reconstructing much of the basilica. During this period a protective shelter was installed over the archaeological remains to protect them. 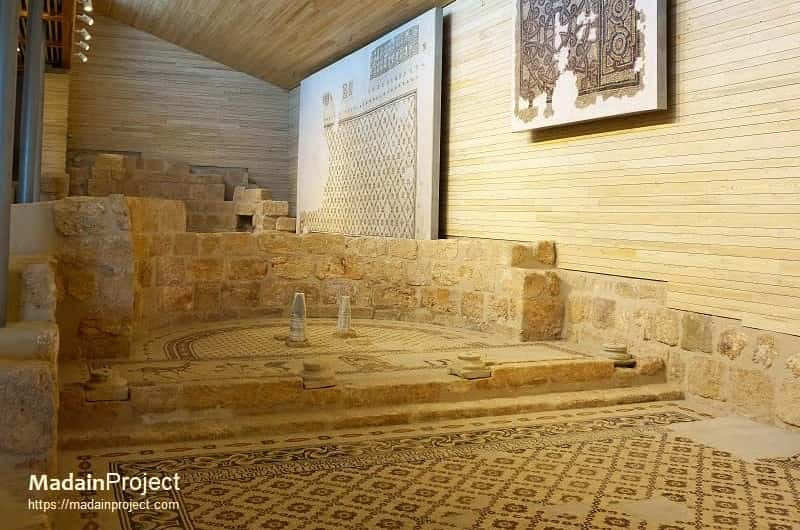 Theotokos Chapel
The Theotokos Chapel, dedicated to the Mary mother of Jesus, was added about 604 CE at the time of Bishop Leontius. The Theotokos Chapel (locate) is located next to the exit door, added in the 7th century where three rooms of the monastery previously stood. Its apse has a mosaic of a square object that may be a ciborium (vessel for the Eucharist) or altar canopy, accompanied by bulls and gazelles. The floor of the chapel is paved with mosaics of plants and flowers. 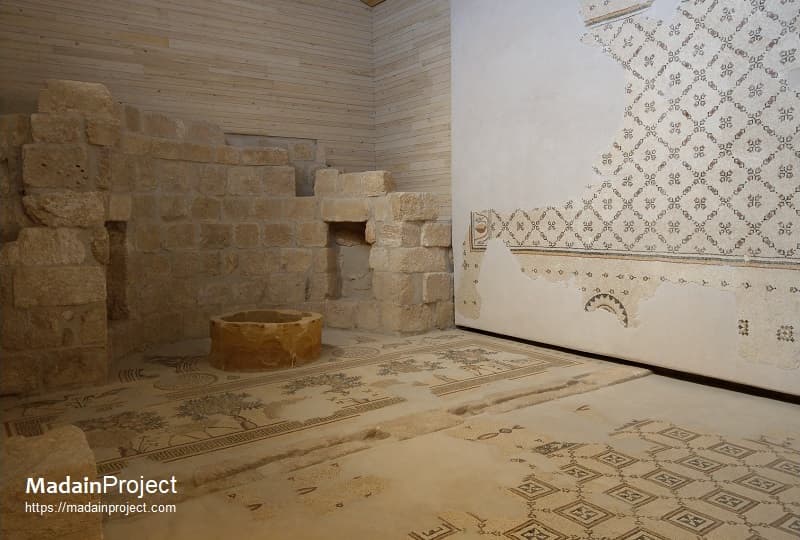 Southern Baptistery
The southern baptistry (locate), on each side of the baptistery font, there medallions with inscriptions stating that the baptistery was completed under Bishop Sergius, at a date equivalent to the year 597 CE. In the same register left, is a pair of herons and right, a pair of ducks. The mosaic below shows a symmetrical composition with five trees and animals between them, that can be recognized as gazelles or deers, and at the right end, a guinea hen.

Diakonikon Baptistery
The Diakonikon Baptistery (locate) inside the the rebuilt basilica houses several remains of antique mosaics but the masterpiece is a hunting and herding scene interspersed with an assortment of African fauna, including a zebu (humped ox), lions, tigers, bears, boars, zebras, an ostrich on a leash and a camel-shaped giraffe. The modern chapel presbytery, builty to protect the site and provide worship space, remnants of of mosaic floors from different periods can be seen.

Braided Cross Mosaic
A large, braided cross, drafted in black on a white background. This mosaic decoration was laid on the floor of a side hall in the first Memorial of Moses. This mosaic panel with a braided cross presently placed on the east end of the south wall, is the oldest of mosaics. The cross used to be part of a floor mosaic of a side room of the vestibule. The side aisle of the church has beautiful geometric mosaics behind and between the columns. 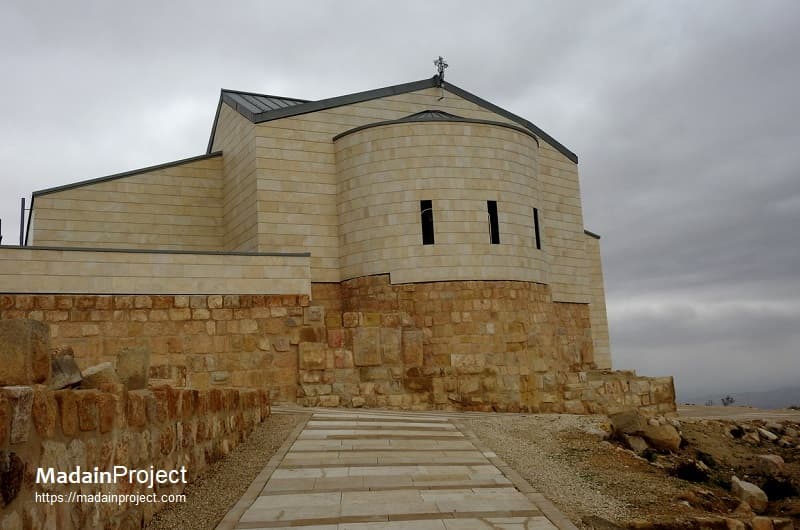 Exterior
Elements of a triple-apse Byzantine basilica were uncovered by archaeologists in the 1930s, and have been incorporated into the structure of the modern church building, known as the Memorial Church of Moses. The church design follows a typical basilica pattern. The previous building was taken down to re-construct the basilica, the renovations started circa 2008 CE and finalized in 2019 CE. 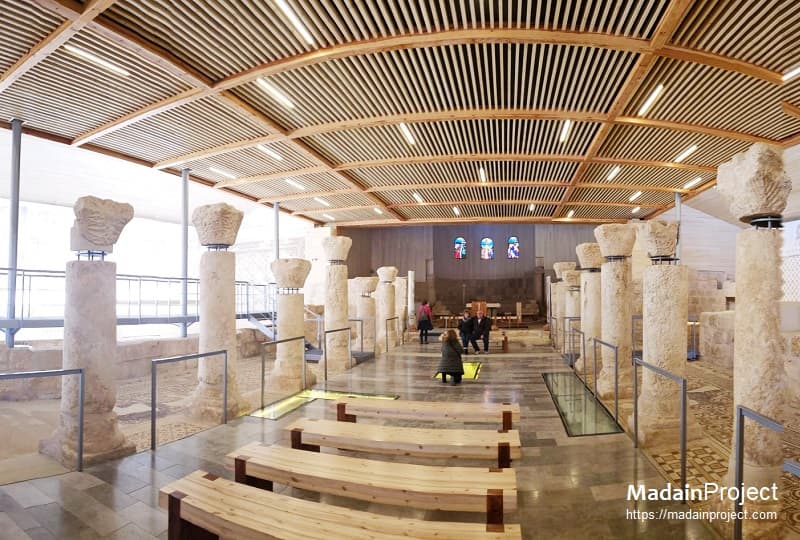 Interior
The view of the central nave with the altar in the background. The apse has three stained glass windows, with the middle one (inspect) depicting Moses standing under the Brazen Serpent with Aaron and Miriam.

Narthex
Narthex of the modern Church (locate), with the entrance to the old structure (right). According to one biblical passage [N1], the Ark of the Covenant was concealed on Mount Nebo when the Babylonians attacked Jerusalem in the sixth century before Christ. During that invasion, the first Temple of Solomon was utterly destroyed and the Ark disappeared from view, never to be seen again.

Nehushtan
The sculpture of a Nehushtan (Brazen Serpent), is the sarpentine cross that stands on the terrace of Mount Nebo was created by the Italian artist Fian Paolo Fantoni. It recalls the bronze serpent on a pole which god told Moses to erect to protect his people from the poisonous snakes that god himself had sent as punishment. It was enough to look at the bronze serpent erected by prophet Moses in order to be healed and saved.