The al-Mukhayyat Mosaics also known as the Mosaics of Memorial Church of Moses or Mount Nebo Mosaics are a collection of antique mosaics discovered at Khirbet al-Mukhayyat. Modern exploration of the site began in 1863 with a brief visit by Félicien De Saulcy, who is generally credited with being the first to record the name, Khirbet al-Mukhayyat (De Saulcy 1865, I: 289-296).

The central mosaic of the Diakonikon Baptistery with its hunting and pastoral scenes of colourful almost intact tesserae is one of the most remarkable Byzantine mosaics in Jordan. It was discovered in 1976 by Fr. Michele Piccirillo in the northern hall of the Moses Basilica, below a simple mosaic floor. A cross-shaped baptismal font was also discovered on the eastern end of the hall. 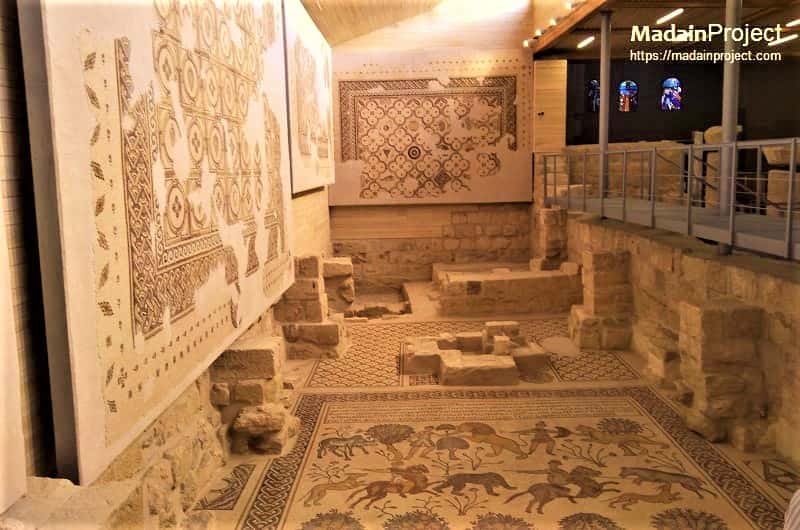 The masterpiece is a hunting and herding scene interspersed with an assortment of African fauna, including a zebu (humped ox), lions, tigers, bears, boars, zebras, an ostrich on a leash and a camel-shaped giraffe. The modern chapel presbytery, builty to protect the site and provide worship space, remnants of of mosaic floors from different periods can be seen.

A large, braided cross, drafted in black on a white background. This mosaic decoration was laid on the floor of a side hall in the first Memorial of Moses. This mosaic panel with a braided cross presently placed on the east end of the south wall, is the oldest of mosaics.

The mosaic in front of the altar of the Theotokos Chapel, dedicated to Mary mother of Jesus, shows a symmetrical composition of a central architectural structure and two bulls (badly damaged), and gazelles, from which the left one is complete, showing a bell around its neck.

In this tent raised in the eastern paved square of the sanctuary near the Interpretation Centre are shown important mosaic floors found on Mount Nebo and recently restored by the Franciscan Archaeological Institute (No. 2): the upper mosaic floor of the Chapel of Priest John (mid-6th century) and the mosaic floor of the Church of Saint George (536 CE).