Mount Nebo (ﺠـبـﻞِ نـﻴـبـو) is an elevated ridge in Jordan, mentioned in Bible as the place where Musa (Moses) was granted a view of the Promised Land. Pilgrims like Egeria or Petrus the Iberer were following this route which starts from Livias, in the plain. At the sixth mile, they did a turn southwards to the Spring of Moses and Mount Nebo.

According to Christian tradition, Moses was buried on the mountain, although his place of burial is not specified (Deuteronomy 34:6). Some Islamic traditions also stated the same, although there is a grave of Moses located at Maqam El-Nabi Musa, 11 km (6.8 mi) south of Jericho and 20 km (12 mi) east of Jerusalem in the Judean wilderness. The chronology of Mount Nebo goes back as far as 3000 BCE.

Systematic exploration begun by Sylvester J. Saller O.F.M. were continued in 1933 by Jerome Mihaic of the Studium Biblicum Franciscanum. On the highest point of the mountain, Syagha, the remains of a Byzantine church and monastery were discovered in 1933. The church was first constructed in the second half of the 4th century to commemorate the place of Moses' death. The church design follows a typical basilica pattern. It was enlarged in the late fifth century CE and rebuilt in 597 CE. The church is first mentioned in an account of a pilgrimage made by a lady Aetheria in 394 CE. Six tombs have been found hollowed from the natural rock beneath the mosaic-covered floor of the church.

Mount Nebo (جبل نيبو), the elevated ridge in Jordan, approximately 710 metres (2,330 ft) above sea levels, offers exquisit panoramic views of the Holy Land. The West Bank city of Jericho is usually visible from the summit, as is Jerusalem on a very clear day. The view from the summit provides a panorama of the Holy Land and, to the north, a more limited one of the valley of the River Jordan. According to the final chapter of the Book of Deuteronomy, Moses ascended Mount Nebo to view the Land of Canaan, which God had said he would not enter; he died in Moab.

The modern building of Moses' Memorial Church atop Mount Nebo, in Khirbet al-Mukhayyat. It was recently, circa 2016 CE, renovated. It houses some of the best (and best presented) mosaics in Jordan, dating from around 530 CE. The church is part of a functioning monastery. The church contains several important archaeological remains dating as far back as mid-fourth century CE, including Chapel of Theotokos, Diakonikon Baptistery, Narthex, and several mosaics.

Interpretation Center
The Mount Nebo Interpretation Center contains several reconstructions of antique mosaics, parts of the building materials and descriptors. In the background can be seen a Roman milestone, which is the one mentioned by the nun Egeria in her pilgrimage account for reaching the monastery.

Byzantine Mosaics
The Byzantine era mosaics of Khirbet al-Mukhayyat date back to the 6th century CE. Though little remains of the early buildings, the mosaics are still in prestine condition. 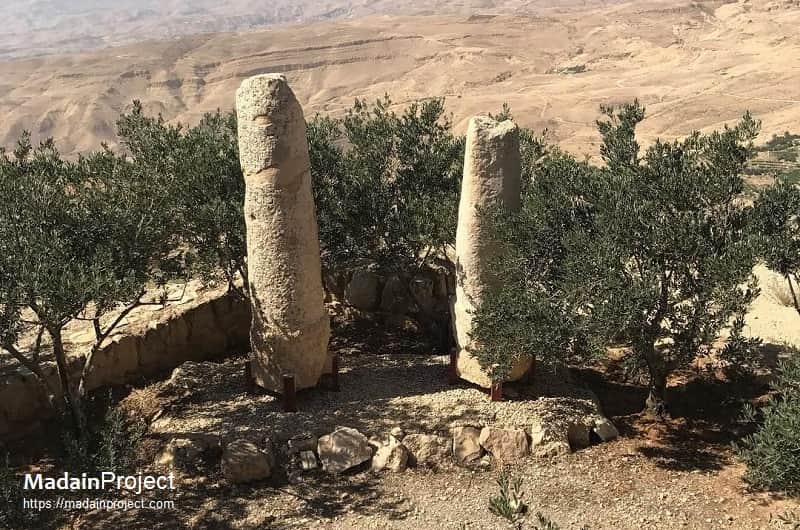 Roman Milestones
Milestones from the sixth mile of the Roman road, which joined Esbous (Hesban) To Livias (al-Ramah) situated in the Jordan Valley. The road which stretched on the ridge north of the Wadi Uyun Musa, was used by Byzantine pilgrims to reach the memorial of Moses on Mount Nebo from Jerusalem. 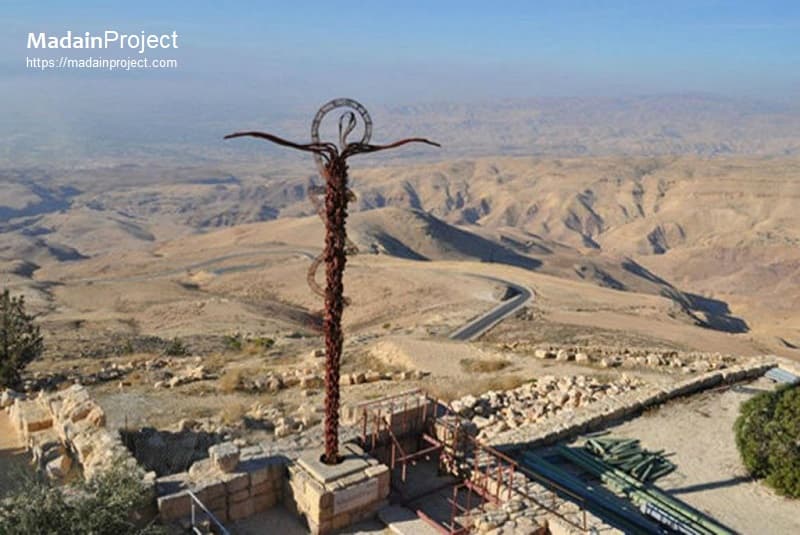 Brazen Serpent (Nehushtan)
A probable replica of Brazen Serpent created by Giovanni Fantoni atop Mount Nebo, symbolic of bronze serpent created by Moses in the wilderness. In the biblical story, following their Exodus from Egypt, the Israelites set out from Mount Hor, where Aaron was buried, to go to the Red Sea. However they had to detour around the land of Edom (Numbers 20:21, 25).

Bianchi Sculpture
Sculpture by Vincenzo Bianchi, commemorating the visit of Pope John Paul II to Mount Nebo, in the year 2000. Pope John Paul II visited the Mount Nebo in holy land, and during his visit to the Moses Memorial Church he also planted an olive tree.

Abu Badd Rolling Stone
The rolling stone used as a fortified door of a Byzantine monastery in the old village of Faisaliyah, once known as Kufr Abu Badd. The south-eastern rear facade of the modern memorial church of Moses over mount Nebo is also visible to the left.