The Theotokos Chapel or the Chapel of Our Lady Mary is a small seventh century CE shapel inside the modern Memorial Church of Moses situatued on Mount Nebo.

The Chapel dedicated to the Mary mother of Jesus was added about 604 CE at the time of Bishop Leontius. The Theotokos Chapel (locate) is located next to the exit door, added in the 7th century where three rooms of the monastery previously stood. Its apse has a mosaic of a square object that may be a ciborium (vessel for the Eucharist) or altar canopy, accompanied by bulls and gazelles. The floor of the chapel is paved with mosaics of plants and flowers.

The mosaic in front of the altar shows a symmetrical composition of a central architectural structure and two bulls (badly damaged), and gazelles, from which the left one is complete, showing a bell around its neck.

According to Fr. Michele Piccirillo, the building represents the Temple of Jerusalem "… in the shape of an arch with an opening on the west side. In the inner space is a huge fire, above which a domed structure (ciborium), supported by four columns, covers a small altar." The biblical inscription in Greek reads: “Then they shall lay calves upon Thy altar” (Psalm 51:21).

The building complex of the late 6th century was extended in the 7th century to a chapel of Our Lady (Theotokos). The presbytery of this chapel has a mosaic floor, which represents an altar between two bulls, according to the inscription (Psalms 51,21 LUT) this is the stylized temple of Jerusalem. In the central panel of the nave are the remains of a hunting scene. 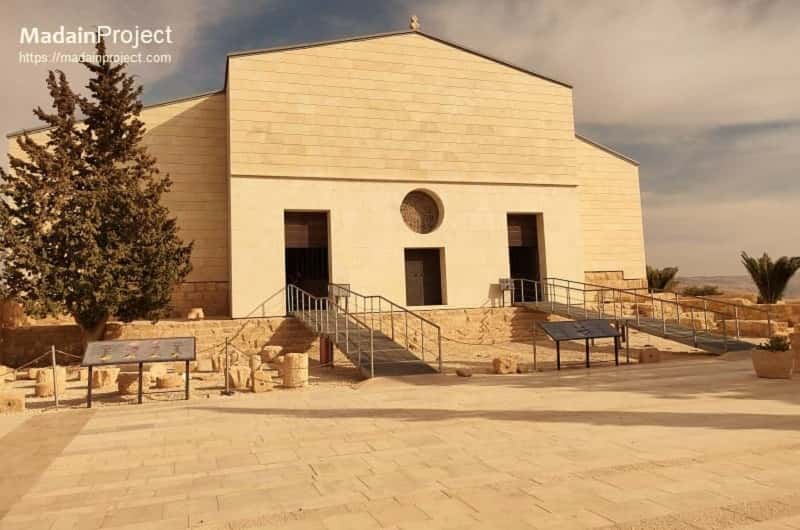 The modern building of Moses' Memorial Church atop Mount Nebo, in Khirbet al-Mukhayyat. It was recently, circa 2016 CE, renovated. It houses some of the best (and best presented) mosaics in Jordan, dating from around 530 CE. The church is part of a functioning monastery, and there's a small but fascinating museum presenting the history of the site. The church is first mentioned in an account of a pilgrimage made by a lady Aetheria in 394 CE.