This page attempts to enlist significant historical and archaeological times regarding the history of Mount Nebo.

Stone monuments erected on the mountain. Excavations indicate that the site of Mount Nebo was occupied in the Early Bronze Age (circa 3000 BCE), with no evidence that it was occupied in the Middle and Late Bronze Ages (circa 1950-1250 BCE). This is the time when early civilization advances in the Fertile Crescent, leaving evidence of agriculture and irrigation, and the domestication of animals.

Israelites wandering in the desert. Moses dies on Mount Nebo (Book of Deuteronomy 34:5). Some Islamic traditions also stated the same, although there is a grave of Moses located at Maqam El-Nabi Musa. According to the final chapter of the Book of Deuteronomy, Moses ascended Mount Nebo to view the Land of Canaan, which God had said he would not enter; he died in Moab.

King Mesha of Moab conquers the City of Nebo (Khirbet al-Mukhayyat). The Mesha Stele, also known as the Moabite Stone, is a stele (inscribed stone) set up around 840 BCE by King Mesha of Moab (a kingdom located in modern Jordan). Mesha tells how Chemosh, the god of Moab, had been angry with his people and had allowed them to be subjugated to Israel, but at length Chemosh returned and assisted Mesha to throw off the yoke of Israel and restore the lands of Moab. Mesha describes his many building projects.

Roman Emperors establish Provincia Arabia, restore its main routes. The Moses Memorial church is first mentioned in an account of a pilgrimage made by a lady Aetheria in 394 CE.

Samaritans leave funerary inscritptions. The Samaritan inscritptions discovered in the Memorial Church of Moses on Mount Nebo (Ras Siyagha) indicate that it was probably a site venerated by the Samaritans before it became a place of Christian pilgrimage. The Palestino-Aramaic inscritption (pictured here) reads: The reader will keep the memory of the benefits of our master Gayanos the priest, and of his heirs who have provided the furnishings of the church...

The Theotokos Chapel, dedicated to the Mary mother of Jesus, was added about 604 CE at the time of Bishop Leontius. The Theotokos Chapel (locate) is located next to the exit door, added in the 7th century where three rooms of the monastery previously stood. Its apse has a mosaic of a square object that may be a ciborium (vessel for the Eucharist) or altar canopy, accompanied by bulls and gazelles. The floor of the chapel is paved with mosaics of plants and flowers.

The site is permanently abandoned and fell in to disuse.

Mt. Nebo identified by Western explorers.
Ras Siyagha and Khirbet al-Mukhayyat acquired by the Franciscans.
Archaeological investigations directed by Fr. Sylvester J. Saller.
Much of our current understanding of Mukhayyat comes from the efforts of the Studium Biblicum Franciscanum. Systematic explorations by the Franciscan’s began in 1933 with Jerome Mihaic’s work. 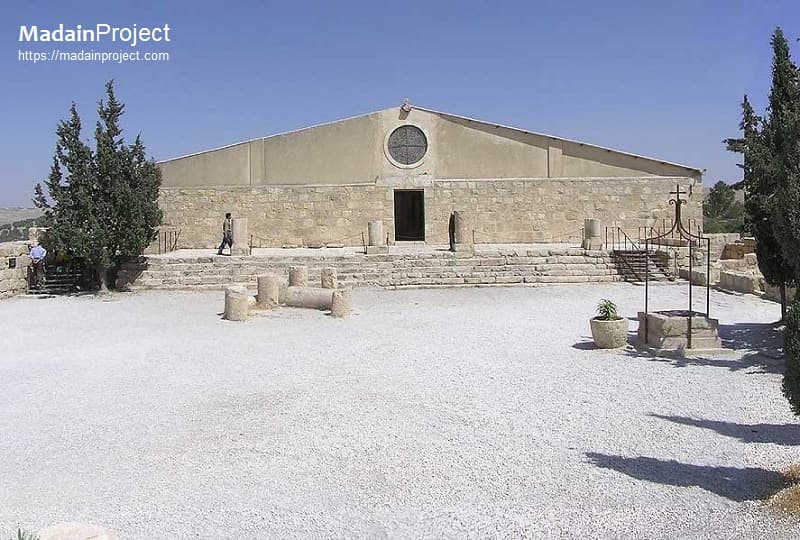 A shelter is built by Fr. Virgilio Corbo, who excavates its interior. In 1963, after the decision of Custody of the Holy Land to restore the original pavements of the Moses Memorial Basilica in order to ex-hibit them. Virgilio Corbo was appoint-ed as the person in charge of the project. A metal shelter designed in Oxford, was put over Mount Nebo Church remains by personnel of the work-shop of St Saviour in Jerusalem under the direction of Nazareno Moretti.

The modern building of Moses' Memorial Church atop Mount Nebo, in Khirbet al-Mukhayyat. It was recently, circa 2016 CE, renovated. It houses some of the best (and best presented) mosaics in Jordan, dating from around 530 CE. The church is part of a functioning monastery. The church contains several important archaeological remains dating as far back as mid-fourth century CE, including Chapel of Theotokos, Diakonikon Baptistery, Narthex, and several mosaics.