The Tower of David or the Jerusalem Citadel hosts a large number of reliefs, artefacts, exhibitions, works of art, models installed at the Jerusalem Citadel. The exhibitions at the Museum present Jerusalem’s story. They detail the major events in its history beginning with the first evidence of a city in Jerusalem in the second millennium BCE, until the city became the capital of the State of Israel. Through the history of the city, visitors discover its significance to three largest monotheistic religions. The permanent exhibition illustrates the city’s history along the axis of time using models, dioramas, film and includes explanations in Hebrew, Arabic and English. 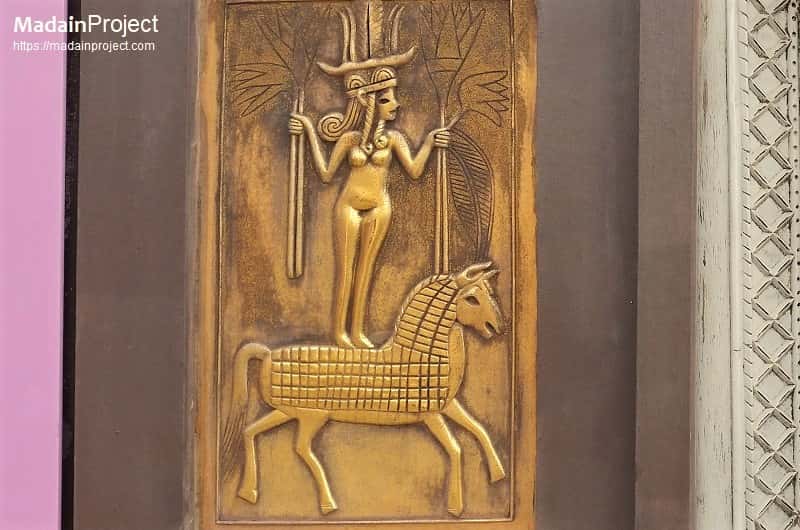 A Goddess in Canaan: The depiction of the goddess shows strong Egyptian influence, typical of Canaanite art in this period. A gold-plaque from Lachish, 13th century BCE, enlarged copy, original located at the Israel Museum.

Abraham and the King of Jerusalem (stylized representation): According to the Biblical tradition Abraham met with the king of Salem, "... Melchizedek king of Salem brought out bread and wine... and said, 'Blessed be Abram by God most high, maker of heaven and earth'". (Genesis 14:18-19)

A Letter from Jerusalem: Some 350 letters written by the governor of Urusalim (Jerusalem) to the Pharaonic kings were uncovered in the Egyptian royal archive of Tel Al Amarna. Jerusalem is mentioned four times in a letter in which Pharaoh is requested to send an army to the city which was in danger.

Assyrian Siege of the city, Sennacherib, king of Assyria, attacked the fortified cities of Judah, laying siege on Jerusalem, but failed to capture it (it is the only city mentioned as being besieged on Sennacherib's Stele, of which the capture is not mentioned). The story of the Assyrian siege is told in the Biblical books of Isaiah, Chronicles and Second Kings.

In 1476 the statue was sold to the municipality of Florence by the sons of Piero, Lorenzo and Giuliano de Medici (who wanted to divide their father's inheritance between them) . The statue was made in the spirit of Donatello's "David" (also commissioned by the Medici) and was in the courtyard of Cosmo de 'Medici's palace.

Replica of Temple Warning Inscription, also known as the Temple Balustrade inscription or the Soreg inscription, is an inscription that hung along the balustrade outside the Sanctuary of the Second Temple in Jerusalem. The inscription was a warning to pagan visitors to the temple not to proceed further, both in Greek and Latin. It was described by the Palestine Exploration Fund in 1872 as being "very nearly in the words of Josephus".

Church of the Holy Sepulchre: Constantine's church was built as separate constructs over the two holy sites: the great basilica (the Martyrium visited by Egeria in the 380s), an enclosed colonnaded atrium (the Triportico) with the traditional site of Calvary in one corner, and across a courtyard, a rotunda called the Anastasis ("Resurrection"), where Helena and Macarius believed Jesus to have been buried.

The cutaway model of Dome of Rock inside the al-Qala'a Mosque, with Mehrab and the pulpit in the background. al-Qal'a Mosque also known as the Masjid Qala'a e Dawud or Mehrab e Qala'a Daood is a small mosque located within the Qal'a (citadel) of Jerusalem, south of Bab al-Khalil (Jaffa Gate). The mosque was recently converted in to a museum with several exhibits from various eras, including Umyyed, Abbasid, Crusader and Mamluk.

Model of Crusader era Jerusalem, the city was conquered by the Christian First Crusade in 1099 CE, after it had been under Muslim rule for 450 years. After the conquest, Jerusalem was emptied of inhabitants, and many houses were abandoned. The Latin city's population was very small and centered upon the Church of the Holy Sepulchre and Tower of David. Being a capital city, Jerusalem was the center of a number of military orders.

Saladin (right) and Richard the Lionheart (left), King of England, an equestrian statue in front of David Citadel. It is one of the several reliefs installed at and around the Jerusalem Citadel including a 19th century model of Jerusalem, Statue of King David. The two met at the Battle of Arsuf, the statues depict an imaginary encounter between Richard the Lionheart and Saladin.

The 1:100 scale aluminum model depicts the structure of the Jerusalem citadel as it is today in detail, including the moat surrounding it, its lavish entrance and the minaret which is called the “Tower of David”. Architectural details such as stones, openings and terraces are depicted in minute detail and the archaeological elements are represented by different textures.

Model of the Chain Gate Fountain also known as Sebil-e Suleimani (Sebil Bab al-Silsilah, located just outside the Bab Silsilah), it is (now defunct) one of the several public Sebils in and around Jerusalem. Jerusalem’s water system was restored during the rule of Sultan Suleiman the Magnificent. Eight fountains (sabils) were built throughout the city providing water to its residents and to visitors for generations.

Saladin at the Gates of Jerusalem: the city was recaptured by Saladin in 1187, who permitted worship of all religions. The Siege of Jerusalem was a siege on the city of Jerusalem that lasted from September 20 to October 2, 1187, when Balian of Ibelin surrendered the city to Saladin. The take-over of the city was relatively peaceful especially in contrast to the Crusader siege of the city in 1099 CE. Saladin allowed many of the noble women of the city to leave without paying any ransom.

Mamaluks in Jerusalem: During the reign of Sultan Baibars, the Mamluks renewed the Muslim alliance with the Jews and he established two new sanctuaries, one to Moses and one to Salih, to encourage numerous Muslim and Jewish pilgrims to be in the area at the same time as the Christians, who filled the city during Easter. In 1267 Nahmanides (also known as Ramban) made aliyah. During the Mamaluk hold the city had no great political power, and was in fact considered by the Mamluks as a place of exile for out-of-favor officials.