al-Qal'a Mosque (مسجد قلعة داود) also known as the Masjid Qala'a e Dawud or Mehrab e Qala'a Daood is a small mosque located within the Qal'a (citadel) of Jerusalem, south of Bab al-Khalil (Jaffa Gate). The Ottomans also installed another mosque, known as the Masjid Sayf (or the Summer Mosque), near the southwest corner of the Jerusalem citadel. It is one of the two mosques inside Tower of David.

Southwest corner of the Jerusalem Citadel with the al-Qala'a or the Mehrab of David Mosque. The mosque extends along the western side of the upper floor of the Citadel's southwestern tower complex. This southwestern tower complex, to which the minaret belongs was constructed during the time of either Sultan Qalawun or Sultan Suleiman. During the reign of Sultan Muhammad IV the minaret of the Citadel, which was built in 938/1531-2 by Sulayman I, was restored by Muhammad Pasha.

Interior
Interior of the Ottoman Mosque, with Mehrab and the pulpit, it has been converted in to a museum. Originally there were six recesses with slits are symmetrically placed in the western wall of the hall, with the piers located along the wall separating those recesses from each other. The western and eastern recesses were blocked when the mihrab and the minbar were installed.

Entrance
Entrance to the mosque is accessed from its eastern side through an entrance porch inside the Jerusalem Citadel.

Conscription Stele
The tablet above the entrance door of the citadel's mosque. The mosque of the Citadel served as a Friday mosque, and was the only Friday mosque within the walls of the city other than al-Aqsa Mosque. It was intended to serve the garrison of the Citadel.

Exhibits inside the Masjid al-Qala' 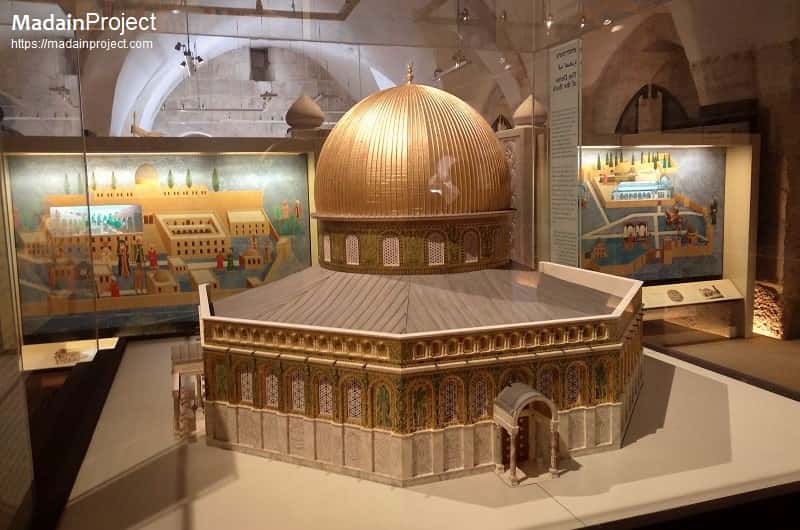