The Holyland Model of Jerusalem is a 1:50 scale-model of the city of Jerusalem in the late Second Temple Period. The model was moved from its original location at the Holyland Hotel in Bayit VeGan, Jerusalem, to a new site at the Israel Museum in June 2006.

The model recreates Jerusalem in year 66 CE, the same year the revolt against the Romans erupted, resulting in the destruction of Temple and the city. The ancient city was then at it's largest, covering an area of ca. 445 acres, thus the model reflects ancient Jerusalem at its peak, just before the city was destroyed. The model of Herod's Temple in Jesus's time, also known as the Second Temple or Beit HaMikdash. 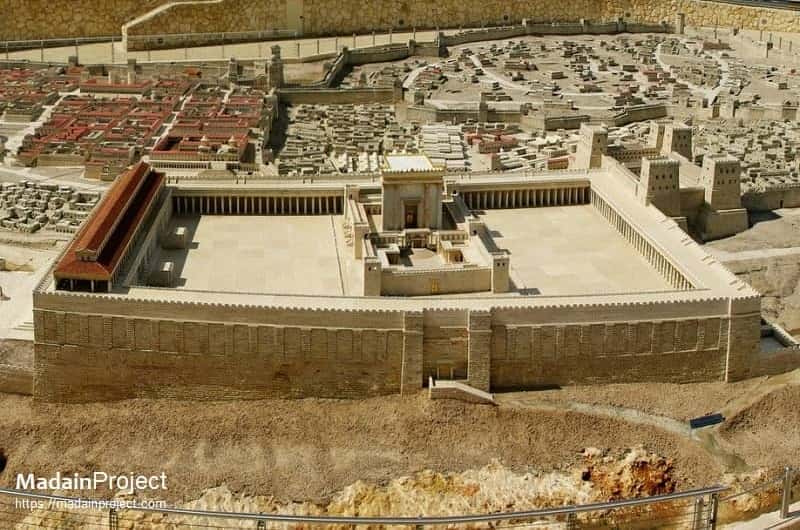 City of David
The Madina Dawud, common Arabic name: وادي حلوه, Wadi Hilweh, is an archaeological site which is speculated to compose the original urban core of ancient Jerusalem. The remains at the site include several water tunnels, one of which was built by King Hezekiah and still carries water, several pools including the Pool of Siloam known from the Old and New Testaments, and here or at the adjacent Ophel scholars expect to find, or claim to have found, the remains of the Acra.

Upper City of Jerusalem
The residential area on the western hill of Jerusalem during the Second Temple Period (its area today extends over the Jewish and Armenian quarters of the Old City and Mount Zion beyond the walls, to the south) became known as the "Upper City". The name stems from the fact that it is topographically higher than the rest of the city, even the Temple Mount. It was re-planned and rebuilt in the finest Roman tradition by Herod and his successors, with blocks of large buildings separated by streets, and plazas along which palaces and public buildings stood.

Lower City of Jerusalem
The Lower City was located on the south-eastern slopes of the western hill, where the crude crowded houses of the poor were located. It is known from the Israelite era to have been known as the "Lower City". In contrast the Upper City was very wealthy and the homes were prominent, and the streets were big and broad. It was the district of Jerusalem that housed most of the common people during the first century. Built on the slope of the Western Hill, it reached into the Tyropean Valley and bordered the fortified City of David.

Bezetha (New City)
The Bezetha (Hebrew: בי חדתא), also called by Josephus the New City was a suburb of Jerusalem, north and north-west of the Temple, built opposite the tower Antonia (now in proximity to the Convent of the Sisters of Zion and Ecce Homo on Via Dolorosa Street) and extending as far as Herod's Gate westward and beyond. Originally, this part of the city was outside the area enclosed by the second wall, but during the reign of Agrippa I, had been enclosed by the newer third wall.

Ophel
The location of the Jerusalem Ophel, meaning fortified hill or risen area, of the Hebrew Bible is easy to make out from the references from 2 Chronicles 27:3; 33:14 and Nehemiah 3:26, 27: it was on the eastern ridge, which descends south of the Temple, and probably near the middle of it.

Pool of Bethesda [locate]
According to the Gospel of John, the Pool of Bethesda was a swimming bath, and was located on the eastern side of the city near the Fortress of Antonia. The name of the pool is said to be derived from the Hebrew and/or Aramaic language. Beth hesda (בית חסד/חסדא), means either house of mercy or house of grace. In the 1st century BCE, natural caves to the east of the two pools were turned into small baths, as part of an asclepieion. 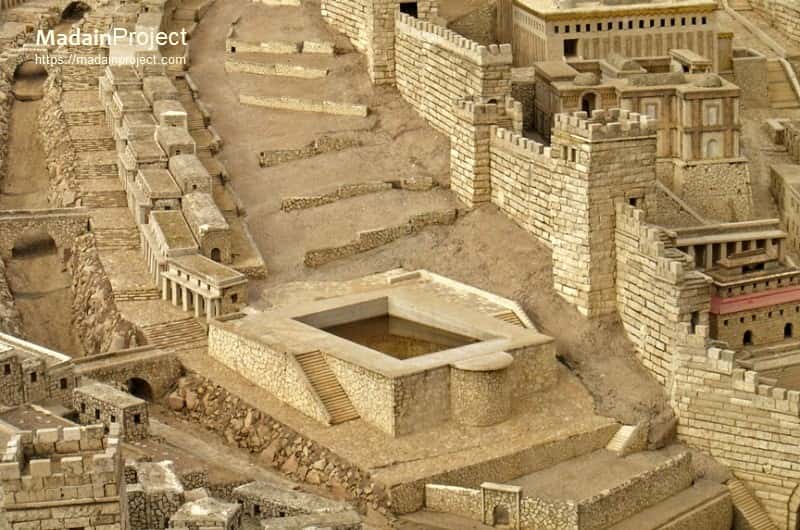 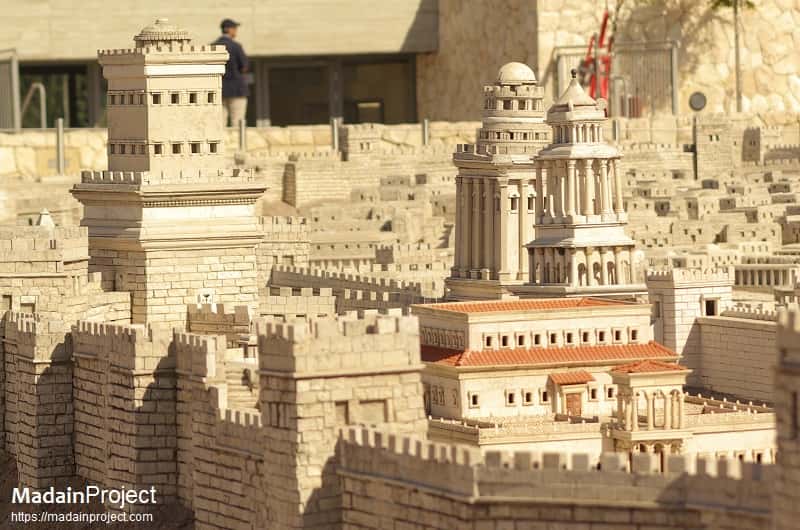 Herodian Towers
Three of the four notable towers, from left to right: Mariamne Tower (left background), Phasael Tower (center foreground), Hippicus Tower (right background). The towers named Phasael, Hippicus and Mariamne were situated in the northwest corner of the so-called First Wall, the Hasmonean and Herodian city wall protecting the Western Hill of Jerusalem. They were situated close to where the Jaffa Gate is today and were built by Herod the Great at the same time he built his immediately adjacent royal palace. 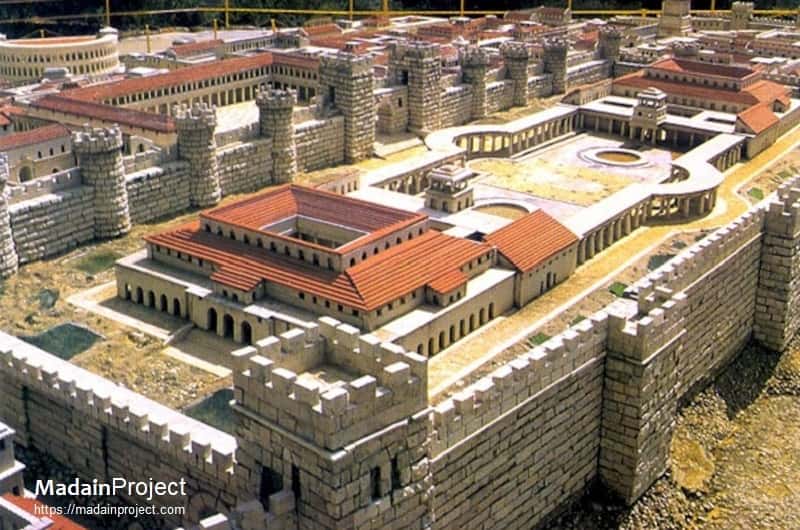 Herod's Palace [locate]
The Palace of Herod was built in the last quarter of the 1st century BCE by Herod I the Great. It was the second most important building in Jerusalem, after the Temple itself, in Herod’s day and was situated at the northwestern wall of the Upper City of Jerusalem. Herod lived in it as a principal residence, but not permanently, as he owned other palace-fortresses, notably at Masada, Herodium and Caesarea Maritima. 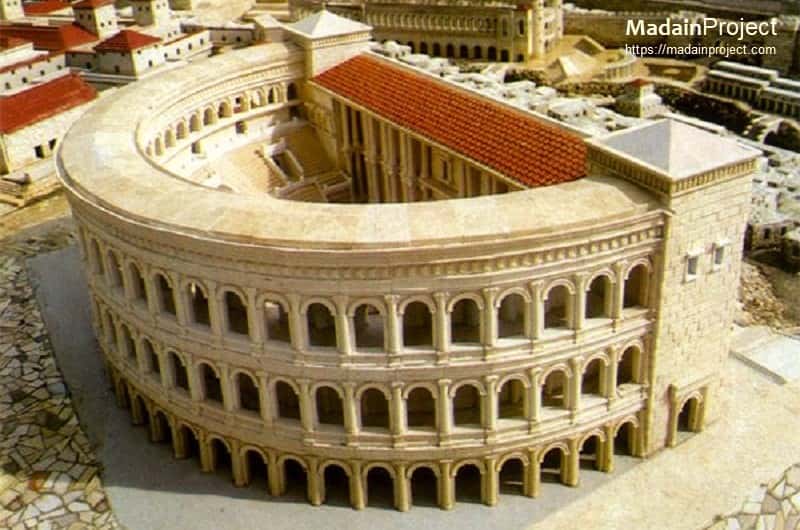 Herodian Theater [locate]
Herod the Great built a marvelous theater in Jerusalem's Upper City. It was a large auditorium with no roof and semicircular rows of seats ascending from the center stage. Wealthy Jews came there to watch the best of Greek and Roman drama. Although Josephus mentions the theatre, archaeological remains of Herod's Theater are scarce.

Upper Market (Agora) [locate]
Was not far from the Temple in the northeastern corner of the Upper City on Mount Zion. The area east of Herod's Palace was known as the Upper City, this is where the wealthy Jews lived. In front of the Palace was the Upper Agora which was a marketplace, a market square or forum).

Hippodrome [locate]
Towards south of the Temple, leading to the Huldah Gates near the Synagogue of the Freedmen was the Hippodrome, built by Herod like a Roman Circus, for horse and chariot races. Josephus mentions that the sports Hippodrome was a great amphitheatre built by Herod the Great in the plain. As the remains of the Hippodrome were not found categorically within the city, it's reconstruction has since been removed (inspect) from the Holyland Model.

Monument of King Alexander Jannaeus [locate]
The Tomb of Alexander Jannaeus was located Near the Pool of the Sheepmarket. Alexander Jannaeus (aka Jonathan the High Priest) was king of Judaea from 103-76 BCE. He was the son of John Hyrcanus and grandson of Simon the Hasmonean (led Judaea to independence). He died on the opposite side of the Jordan River and was buried in this tomb in Jerusalem.

Tomb of Huldah [locate]
Model of the Tomb of Huldah as seen in Holyland Model of Jerusalem. The Western Huldah Gates in the Southern Temple Mount Wall are visible in the background as well. She lived in Jerusalem, in the Second District or Second Quarter, according to the Jewish tradition she was the adviser to King Josiah 2700 years ago. It would have been located in the area called Ophel, south of the Temple Mount.

Antonia Fortress [locate]
The Fort Antonia was located on the Northwest corner of the Temple Mount and called the Fortress of Antonia, named after Herod’s friend Marc Antony and another of Herod's landmarks. It stood 115 feet high and was partly surrounded by a deep ravine 165 feet wide. It functioned as headquarters for the Roman soldiers, overlooking Jerusalem, the Antonia Fortress was garrisoned with 600 Roman soldiers, who watched over the Temple courts in order to preserve order.

David's Tomb [locate]
Model of the David's Tomb as it might have looked in the first century CE, it stood behind the Palace of Caiaphas. Today the traditional tomb of David is located on the western hill of Jerusalem (modern Mt. Zion), just outside the old city.

Fish Gate
The Fish Gate, mentioned in a the Book of Nehemiah, was a gate in the north wall of Jerusalem, probably a little to the east of the current location of Damascus Gate. The modern Damascus Gate probably replaced this earlier entrance, to the old city of Jerusalem. It was the closest gate to the fish market, and it is believed that fishermen from the Sea of Galilee and the Jordan River, Jewish and Syrian alike, used this gate to bring fish to market. 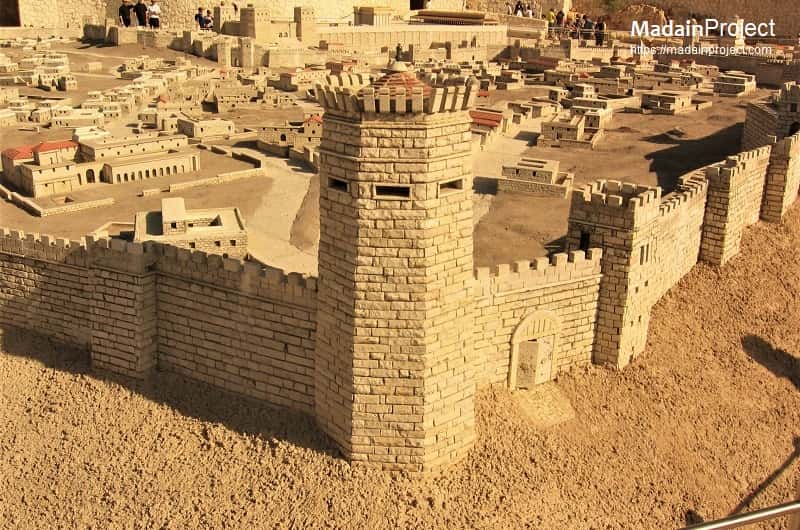 Tower of Psephenus
The tower of Psephenus or Psephinus, was located on the north-western corner of the Jerusalem's third wall. Josephus mentions the Tower Psephinus saying, "But wonderful as was the third wall throughout, still more was the tower Psephinus, which rose at its northwest angle and opposite to which Titus encamped. For, being seventy cubits high, it afforded from sunrise a prospect embracing both Arabia and the utmost limits of Hebrew territory as far as the sea." (Josephus Wars).