Door of the Holy Sepulchre

The entrance door to the main church building is in the south transept, through the crusader façade, in the parvis of a larger courtyard. This is found past a group of streets winding through the outer Via Dolorosa by way of a local souq in the Muristan.

Today, only the left-hand entrance is currently accessible, as the right doorway has long since been bricked up. The eastern door (right) gave way to the funerary chapel of the crusader kings, located beneath the Calvary Chapel. The date of the walling up is uncertain.

The original entrance to the Basilica of Constantine was in fact from the east, and later on another entrance (inspect) was introduced in the western side, most probably during crusade era. 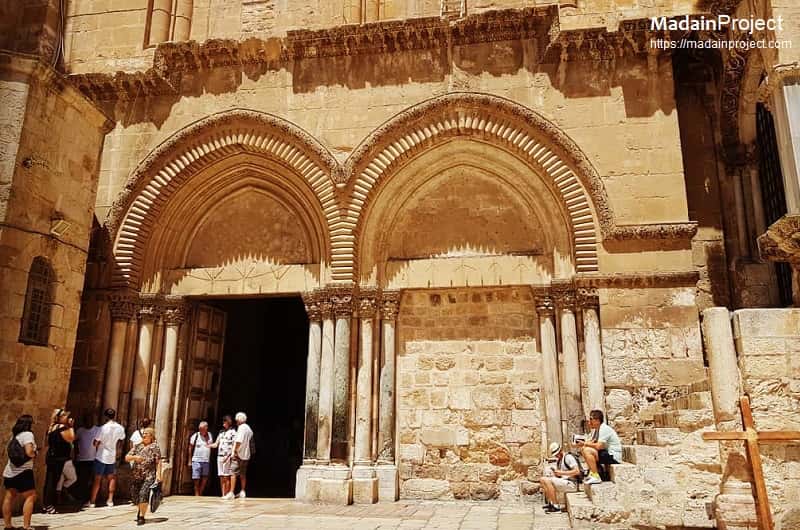 Installation
The modern day basilica majorely dates back to the crusader era, circa 1100 CE. As part of the expansion and reconstruction this twin-door entrance was installed in the southern facade of the church. For its re-inauguration in 1149 two carved lintels were installed over the southern entrances. The southern façade of the Holy Sepulchre was adorned until 1929 with two carved lintels (inspect), distinct in their iconographies (exhibited ever since in the Rockefeller Museum).

Western Christological Lintel
The western Christological lintel represents the narrative of the last days of Jesus in Jerusalem (albeit in breach with the narrative sequence), was mounted on the left side door which is today open. The scenes from left to right depict, raising of Lazarus, the imploring of Christ by Mary and Martha, Christ giving instructions for Last Supper, the entry of Jesus in Jerusalem, and the Last Supper. The lintel is damaged in the center, where the episode of the expulsion of the merchants and cleaning of the temple.

Eastern Peopled-Scroll Lintel
The eastern peopled-scroll lintel is a non-narrative representation of a variety of beasts, birds, and naked male figures, some of whom are obscenely pointing to their genitalia. The puzzling iconography of this bestial world includes the conspicuous images of a bird-siren and a centaur. The main ingredients of the lintel are its figures, seven of these are men, other figures include a centaur, his bow and arrow at rest, and a harpy below him, birds, dragons at the bottom.

Wooden Doors
The wooden doors that compose the main entrance are the original, highly carved arched doors. The eastern (right) panel of the door has a small square area from which the ladder is passed when it is time to unlock the Church in the mornings. To the left of the door stands an ancient marble pillar with graffiti rendered by pilgrims who visited the place over the centuries. 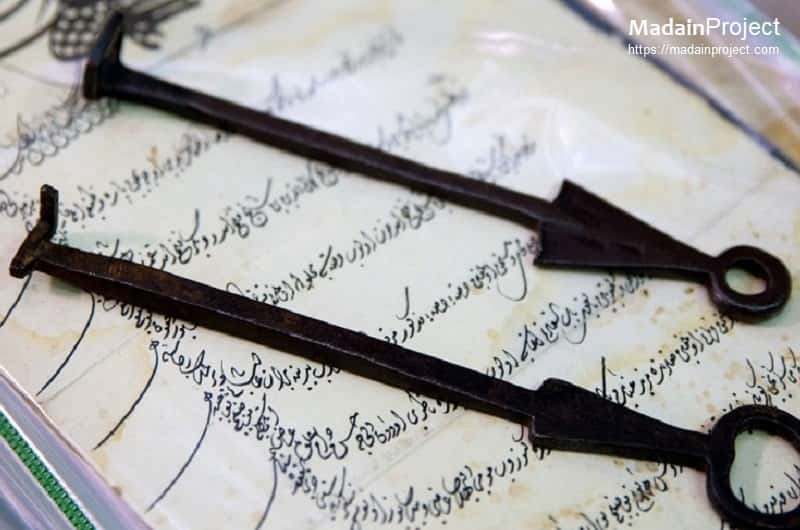 Since 1187, from the time of Salah ul-Dun Ayyubi the custody of the keys for the Church of Sepulchre is entrusted to two Muslim families Nuseibeh and Judeh. A member of the custodian families, unlocks and opens the gate early in the morning. It is said that Saladin entrusted the custody of the doors of the Holy Sepulchre to the leading and most renowned Shaikh Ghanim ben Ali ben Hussein al-Ansari al-Khazrajy.