Chapel of the Franks

Chapel of the Franks is a small 12th century Crusader chapel inside the Church of the Holy Sepulchre, according to Christian tradition it was here that Jesus was stripped off of his clothes. Also called the Chapel of the Torment, Chapel of the Seven Sorrows of the Blessed Virgin Mary or Our Lady Sorrows, it is the tenth station on Via Dolorosa.

APA
Chapel of the Franks (n.d.). Retrieved on January 22, 2022, from https://madainproject.com/chapel_of_the_franks

The Chapel of the Franks is the small square above ground structure with blue dome and red grills, situated in the north-east corner of the Holy Sepulcher's courtyard. Also known as the Roman Catholic Crusader chapel dedicated to Our Lady of Sorrows, once provided exclusive access to chapel that marks the 10th Station of the Cross (the stripping of Jesus' garments).

This chapel was the last Crusader invention to the Holy Sepulchre Church. 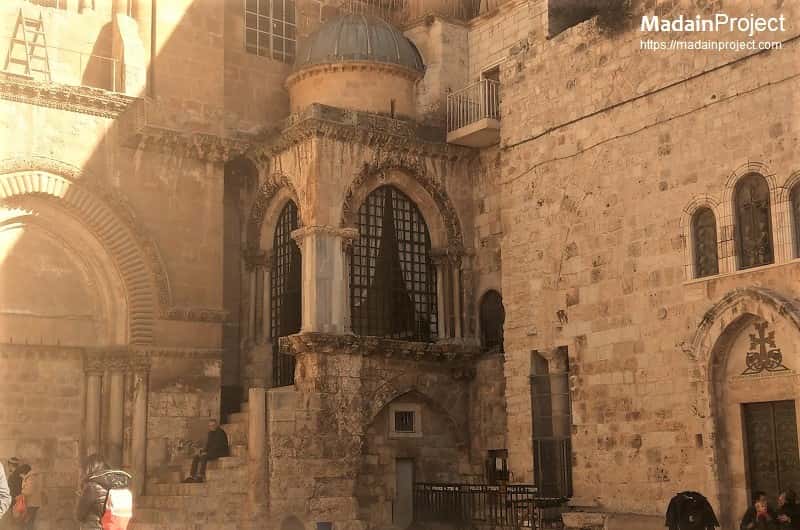 The Chapel of the Franks, whose real name is the Chapel of the Torment or Chapel of Our Lady of Sorrows or Chapel of the Seven Sorrows of the Blessed Virgin Mary, is literally against the basilica’s façade accessed via a flight of stairs. The present church of the Holy Sepulchre has experienced many changes during the centuries. Only a small piece of the original decoration in mosaic still remains in situ, the remaining piece of mosaic that is still over the entrance of Calvary is characterized by extremely good quality in design.

18th century Wooden Altar
Interior of the chapel is quite ornate, the decorations inside were made over centuries. On the eastern wall a painting hangs, which depicts the "Three Marys" watching the Crucifixion. Below this painting a historic 18th century wooden altar is placed. Recently a group of Italian restorers cleaned out this altar that and the painting depicting Mary and John under the Cross.

Calvary Mosaic
The chapel contains a beautiful decorative mosaic that covers the entrance, made by coloured glass cubes, natural limestone, and glazed ceramics. Here, in what was formerly an external entrance to Calvary, the Tenth Station is located. Only a small piece of the original decoration in mosaic still remains in situ, the remaining piece of mosaic that is still over the entrance of Calvary is characterized by extremely good quality in design.

The window in the western wall of the chapel, it overlooks the inside of the basilica. The marble columns and capitals were recently cleaned and renewed along with the polychromatic flooring. Young Palestinians from the Jericho Mosaic Center recovered the precious mosaics in the space above the window. This type of mosaic is one of the rare examples that mixed glass mosaics, natural stone, and glazed ceramics together.

The Greek Orthodox oratory and chapel, directly beneath the Chapel of the Franks, dedicated to St. Mary of Egypt, a dissolute, who arrived in Jerusalem at the age of 29, and converted to Christianity. The open door to the right is the entrance to the Ethiopian chapel.

Courtyard of the Holy Sepulchre 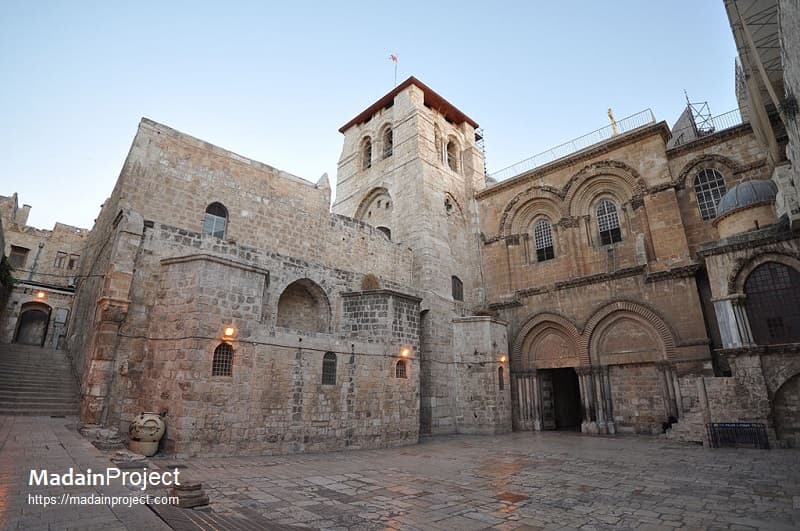 Courtyard of Church of the Holy Sepulchre with the Chapel of the Seven Sorrows of the Blessed Virgin Mary to the right. Durig the crusader's era, a new façade was built and a fl ight of stairs on the right lead to a loggia enclosed on two sides by windows with iron grates, dedicated to Our Lady of Sorrows, known more recently as the Chapel of the Franks