al-Diwan (الديوان) is a square chamber containing three stone benches that served as a triclinium for sacred feasts. Today, the chamber is known as al-Diwan (court).

Its large entrance suggests that the feasts extended into the open space before it. The Diwan itself was a place reserved for religious gatherings and consisted of a rectangular room carved in the rock measuring 12.8 x 9.9 metres and 8 metres in height. 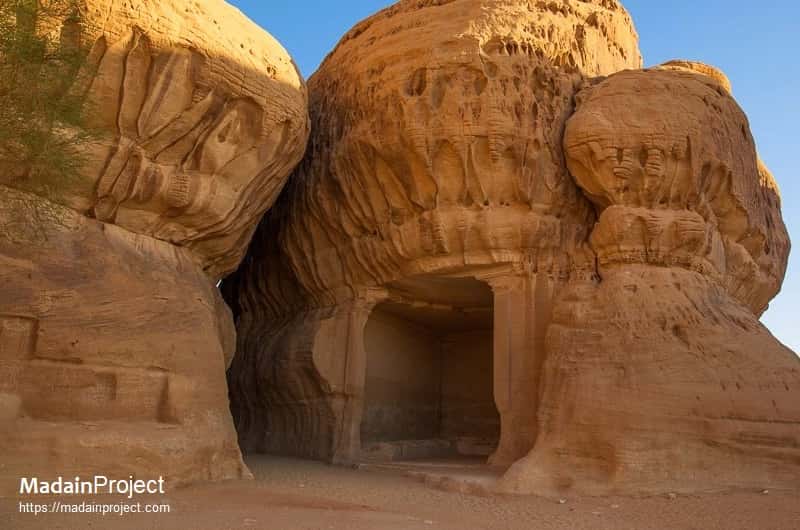 There are several theories as to what was this place used for, some suggest that the Nabatean rulers held court orders and meeting here. The Nabateans were an ancient people of the Middle East who became wealthy through the caravan trade between Southern Arabia and the Jordan Valley. They are most famous for the magnificence of their capital city of Petra (in modern Jordan), which has rightly been chosen one of the Modern Seven Wonders of the World.

Carved into a hillside to shield it from the wind, is one of the few extant examples of nonfunerary architecture in Madain Saleh. The name (diwan means 'living room') owes more to modern Arab culture than to the Nabataeans, who probably used the area for sacred feasts. There are niches cut into the rock where Nabataean deities were carved. Exposure to the elements has badly weathered these carvings.

al-Siq (آل السيق) is a narrow passageway (reminiscent of the Siq in Petra), running south from Al Diwan, measures about 40m wide between two rock faces lined with more small altars. The jagged cliff walls of the siq, the natural passageway leading to Jabal Ithlib, had decorated votive niches to Nabatean gods carved into the rock and petroglyphs of camels and traders.