Petra (ٱلْبَتْرَاء‎, Al-Batrāʾ), originally known to its inhabitants in as Raqmu or Raqēmō, is a historic and archaeological city in southern Jordan. Petra lies around Jabal al-Madbah in a basin surrounded by mountains which form the eastern flank of the Arabah valley that runs from the Dead Sea to the Gulf of Aqaba. The Nabataeans were nomadic Arabs who invested in Petra's proximity to the incense trade routes by establishing it as a major regional trading hub.

It is adjacent to the mountain of Jabal al-Madbah, in a basin surrounded by mountains forming the eastern flank of the Arabah valley running from the Dead Sea to the Gulf of Aqaba.

Established possibly as early as 312 BCE as the capital city of the Nabataeans, it lies on the slope of Jebel al-Madhbah (identified by some as the biblical Mount Hor) in a basin among the mountains which form the eastern flank of Arabah (Wadi Araba), the large valley running from the Dead Sea to the Gulf of Aqaba. Petra was home to roughly 30,000 people and was abandoned in the year 106 CE because of reasons unknown. Petra is comprised of two sections Petra Central (the proper city) and burial tombs in and around Petra.

Petra is typically divided in to two areas, first the urban settlement located in the valley and second are the necropoles spread around the archaeological site. 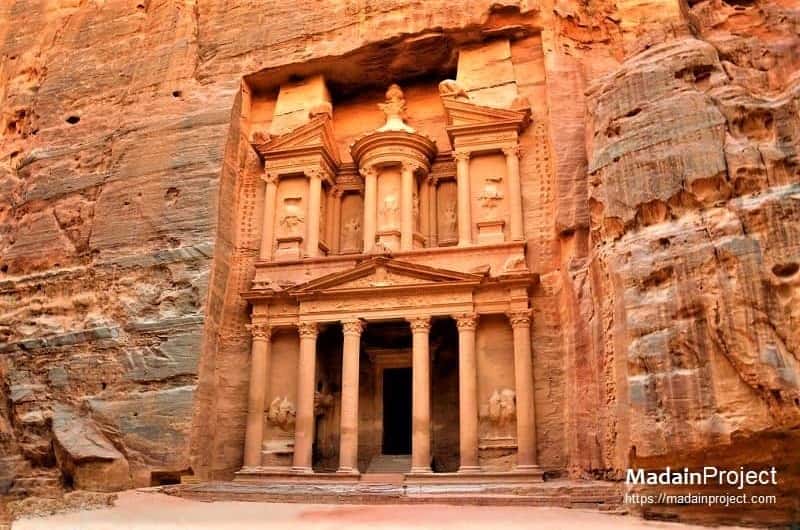 Inhabited since prehistoric times, the Nabataean caravan city of Petra, situated between the Red Sea and the Dead Sea, was an important crossroads between Arabia, Egypt and Syria-Phoenicia. Petra is half-built, half-carved into the rock, and is surrounded by mountains riddled with passages and gorges. It is one of the world's most famous archaeological sites, where ancient Eastern traditions blend with Hellenistic architecture.

Access to the city center is through a 1.2 (0.75 miles) kilometre long gorge called the Siq, which leads directly to the al-Khazneh. Famous for its rock-cut architecture and water conduit system, Petra is also called the "Rose City" because of the colour of the stone from which it is carved.

Petra has more than a thousand tombs carved in its rocky terrain. The most impressive of these are the 600 or so façade tombs that enliven the mountains surrounding the city centre. These tombs, carved by the Nabataeans between the 1st century BCE and the 2nd century CE, served a dual function: they provided a safe and ‘eternal’ place of burial, while the decorated façade commemorated the individuals and families buried within.

The fusion of Hellenistic architectural facades with traditional Nabataean rock-cut temple/tombs including the al-Khazneh, the Urn Tomb, the Palace Tomb, the Corinthian Tomb and the Deir ("monastery") represents a unique artistic achievement and an outstanding architectural ensemble of the first centuries BCE to CE.