The Qasr al-Bint (قصر البنت) is one of the at least four necropoles of Madain Saleh. Qasr al-Bint is the most famous of al-Hijr necropolis and the most visited. Its 31 tombs are neither the largest nor the most decorated ones but they form, as a whole, the most conspicuous and most representative group at Madâin Sâlih. They date from year 0 up to 58 CE.

Some of Qasr al-Bint tombs show remarkable decorative elements such as masks of frightening monsters, eagles, human faces, and other small sculpted animals. As late as the third century CE, a man still had a tomb built for his mother at the southern end of the Qasr al-Bint with an inscription written in Nabataean script but in Arabic language.

The largest among them is IGN 20 (16m high), situated in a very prominent position in the middle of the western flank. Qasr al-Bint contains also an unfinished tomb, best visible from afar, which, had it been finished, would have been the largest tomb at the site probably reaching more than 30 meters (each degree of the halfstep is more than 1.7 m high). A beautiful Nabataean inscription, written just below the tomb, says that the owner was one of the local Nabataean governors.

Tombs are concentrated in a single group carved around an individual outcrop or rock, as recorded by explorers and travellers to AlUla in the late 19th and early 20th centuries. Whilst clearly the tombs here at Hegra are of the same civilisation as at Petra and feature many of the same designs and architectural features, there are also key differences in their contexts. 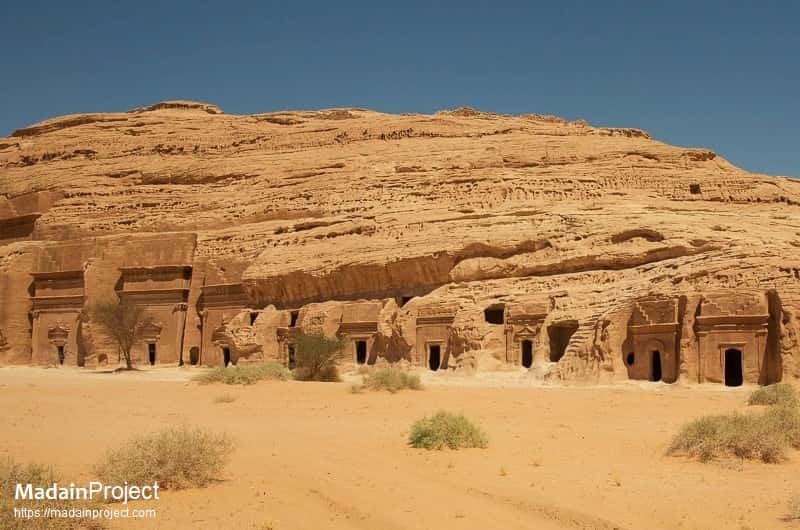