Sun Cult Altar at the Mortuary Temple of Hatshepsut

The Sun cult altar or the Solar Worship altar, located in the northern part of the upper terrace of Hatshepsut’s temple at Deir El-Bahari. It is part of the Solar Cult Complex. 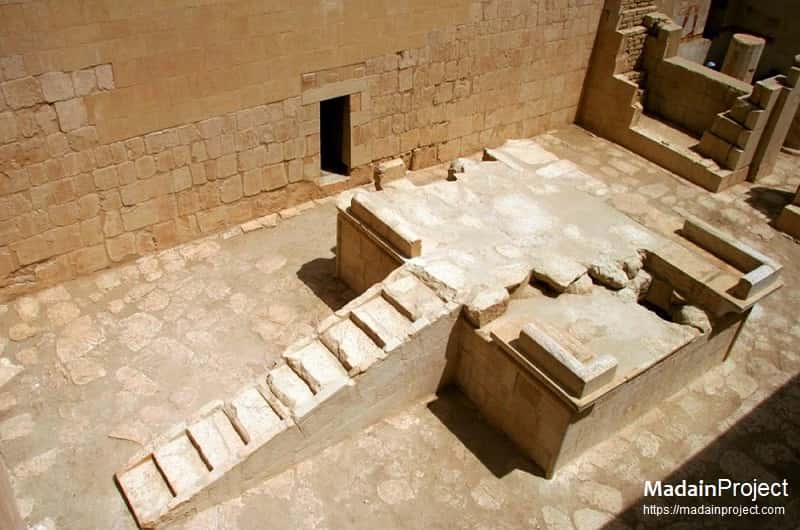 The Sun Altar (illustration) stood in the middle of the courtyard of the Solar Cult Complex, which was entered from the Upper Courtyard of the mortuary temple of Hatshepsut in Deir el-Bahari. The Altar courtyard is, contrary to the Night Sun chapel, open to the sun light. The courtyard is dominated by the huge limestone altar which every day was touched by the sun rays. This part of the complex is dedicated to the diurnal journey of the sun in the sky.

The altar was constructed of pale yellow limestone, the blocks being placed directly on the slabs of the courtyard pavement. It was at first a small altar without steps. Six steps were added next on the western side. Then the whole structure was aggrandized; the small altar was engulfed by the structure of the greater altar with its nine steps. The entrance to the upper Anubis shrine is also visible to the left.

The main deity worshiped in the complex of the Sun cult was Amun-Re, but an important place was reserved also for Ra-Horakhty and Atum-Amun, which are nothing more than three different aspects and forms of the solar god, complementing each other.

The southwestern upper part of the altar was missing along with a fragment of the balustrade and a few blocks from the walls found scattered in the neighborhood. Missing fragments from the southeastern corner revealed the presence of an earlier phase in the form of a small altar. The remains were documented and preserved by E. Newberry in 1893–1894 (Karkowski 2003: 30).

The cavetto cornice moldings were reused in the new structure, while sections of the torus were cut away and the cut surfaces decorated in relief (Karkowski 2003: 40).

The works of the Egyptian-Polish mission directed by Eng. Zygmunt Wysocki (1968-1988), Dr. Franciszek Pawlicki (1992-1999) and Dr. Zbigniew E. Szafranski (1999 till present) resulted with the final restoration and conservation of this part of Hatshepsut’s temple.