The Mortuary Temple of Hatshepsut, also known as the Djeser-Djeseru ("Holy of Holies"), is a mortuary temple of Ancient Egypt located in Upper Egypt. Built for the Eighteenth Dynasty pharaoh Hatshepsut, it is located beneath the cliffs at Deir el-Bahari on the west bank of the Nile near the Valley of the Kings. This mortuary temple is dedicated to Amun and Hatshepsut and is situated next to the mortuary temple of Mentuhotep II, which served both as an inspiration and later, a quarry. It is considered one of the "incomparable monuments of ancient Egypt".

Hatshepsut's chancellor, the royal architect Senenmut, oversaw the construction of the temple.

The temple was designed by Hatshepsut’s steward and confidante Senenmut, who was also tutor to Neferu-Ra and, possibly, Hatshepsut’s lover. Senenmut modeled it carefully on that of Mentuhotep II but took every aspect of the earlier building and made it larger, longer, and more elaborate.

There are three layered terraces reaching 29.5 metres (97 ft) tall. Each story is articulated by a double colonnade of square piers, with the exception of the northwest corner of the central terrace, which employs proto-Doric columns to house the chapel.

Middle Terrace Ramp
On the right (north-east) side of the ramp leading to the third level was the Birth Colonnade (inspect), and on the left (south-west) is the Punt Colonnade (inspect). The ramp to the third level, centered perfectly between the Birth and Punt colonnades, brought a visitor up to another colonnade, lined with statues, and the three most significant structures: the Royal Cult Chapel, Solar Cult Chapel, and the Sanctuary of Amun.

Birth-Colonnade
The Birth Colonnade told the story of Hatshepsut’s divine creation with Amun as her true father. Hatshepsut had the night of her conception inscribed (read) on the walls relating how the god came to mate with her mother. As the daughter of the most powerful and popular god in Egypt at the time, Hatshepsut was claiming for herself special privilege to rule the country as a man would.

He [Amun] in the incarnation of the Majesty of her husband, the King of Upper and Lower Egypt [Thutmose I] found her sleeping in the beauty of her palace. She awoke at the divine fragrance and turned towards his Majesty. He went to her immediately, he was aroused by her, and he imposed his desire upon her. He allowed her to see him in his form of a god and she rejoiced at the sight of his beauty after he had come before her. His love passed into her body. The palace was flooded with divine fragrance.

Chapel of Anubis
The chapel of Anubis is located at the north end of the second level of Hatshepsut’s mortuary temple. Anubis was the god of embalming and the cemetery. He was frequently represented with the body of a man and the head of a jackal, as he is shown here. Anubis sits on a throne, which, in turn, rests on a small plinth. He faces a pile of offerings which reaches in eight levels from the bottom to the top of the register. Although much of the color is now gone, one can imagine the vibrancy of the original painting. The Egyptians used mineral pigments; so the colors have not faded as much as vegetable pigments would have.

Chapel of Hathor
Since Hathor was the guardian of the Deir el-Bahari area, it is appropriate to find a chapel dedicated to Goddess Hathor within Hatshepsut’s mortuary temple (south end of second level). The columns which fill the court (inspect) of this chapel are Hathor columns, each of which resemble a sistrum, a percussion instrument associated with the goddess of love and music. The capitals of the columns (inspect) are topped with female head with cow ears topped with a crown, the curved sides ending in spirals, perhaps suggestive of cow horns. The central section of the crown is a shrine in which two uraei (rearing cobras with spread hoods) are surmounted by sun disks. A cavetto cornice tops the whole.

Upper Portico
The upper terrace of Hatshepsut's temple has a forefront portico with two rows of columns. The external row is made of square columns decorated with colossal osiride statues of the queen, of which only few remain. The inner row is made of octogonal columns. These statues of Osiris have the delicate features of Hatshepsut, the female pharaoh, wearing the Double Crown of Egypt and a false beard with a curved tip (indicative of divinity). 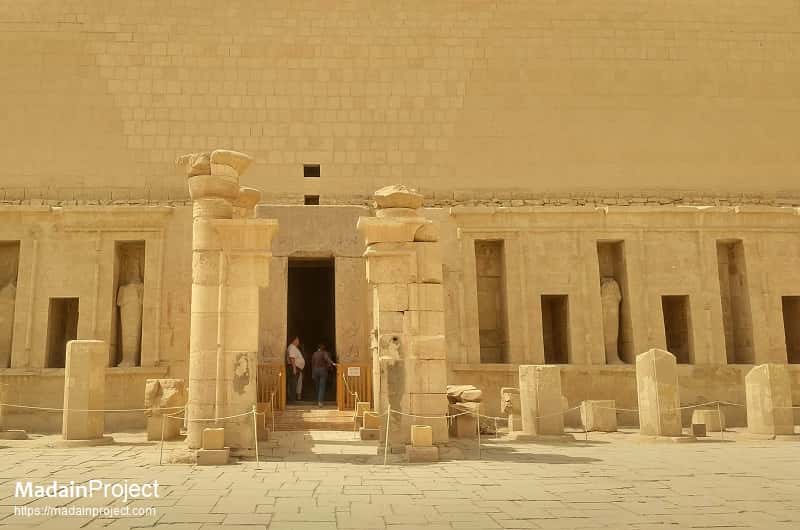 Upper Court
When entering the third and the upper most court, the first noticeable thing is that it seems empty though it once contained two rows of colums, of which only a few one have been reerected. The back of the court houses the very heart of the temple: a sanctuary dedicated to the god Amun, cut directly in the mountain. On each side of the entrance to the sanctuary (inspect) there are nine niches, small cult chapels alternate with niches housing osiride statues of the queen.

Inner Sanctuary
Here is where a very important ceremony, dedicated to the Sun-God, took place: the placing of the Amun-Ra celestial sun-boat which arrived carried on the shoulders of priests from the Temple of Karnak, on the Nile river's Eastern bank. Images of the procession and a relief of the Sun-boat appear on the vestibule's walls, where the remaining image of the Royal family in Hatshepsut's temple can be seen.

Sun Cult Complex
The Shrine Complex of the Sun Cult is a group of rooms located in the northern part of the upper terrace of Hatshepsut’s temple at Deir El-Bahari. It was first unearthed by the expedition of the Egypt Exploration Fund in 1893 under the direction of Edouard Naville and some of its texts and representations were published in his monumental publication of the whole temple.

Similarities with the Temple of Mentuhotep II

Although the adjacent, earlier mortuary temple of Mentuhotep II was used as a model, the two structures are nevertheless significantly different in many ways. Hatshepsut's temple employs a lengthy, colonnaded terrace that deviates from the centralised structure of Mentuhotep’s model – an anomaly that may be caused by the decentralized location of her burial chamber. Mentuhotep II’s temple featured a large stone ramp from the first courtyard to the second level; Hatshepsut’s second level was reached by a much longer and even more elaborate ramp one reached by passing through lush gardens and an elaborate entrance pylon flanked by towering obelisks.

The Polish Academy of Sciences in Warsaw is responsible for the study and restoration of the three levels of the temple. As of early 1995, the first two levels were almost complete, and the top level was still under reconstruction. 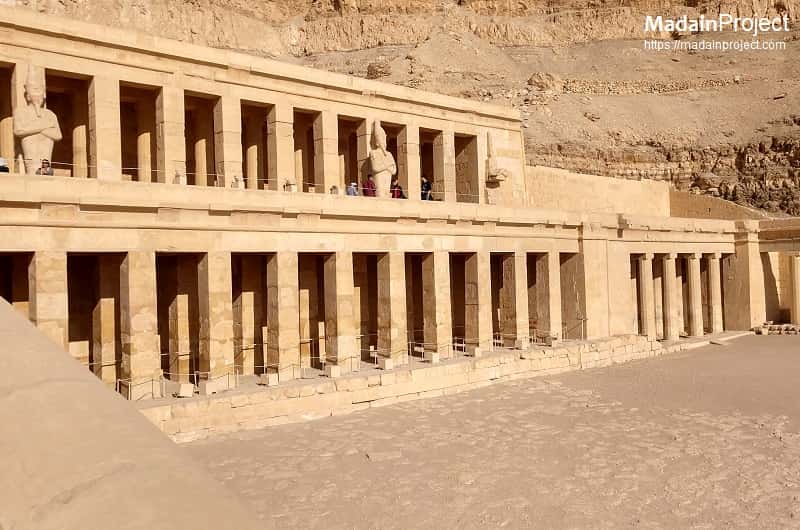 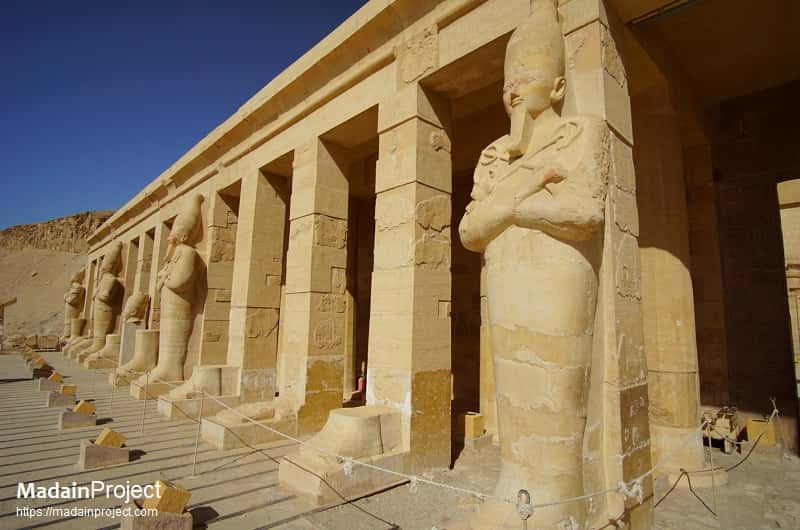 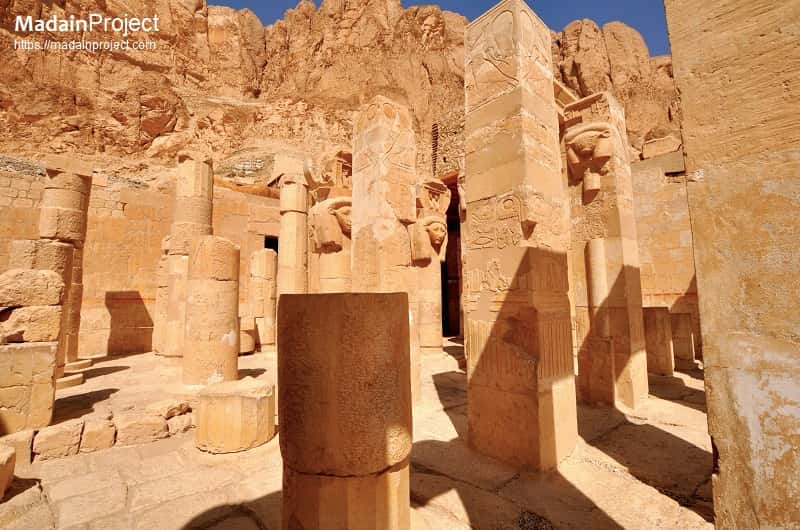 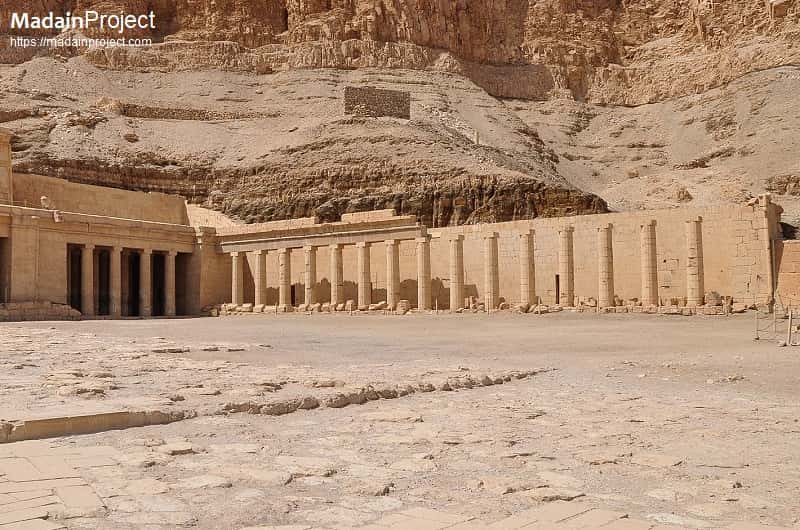 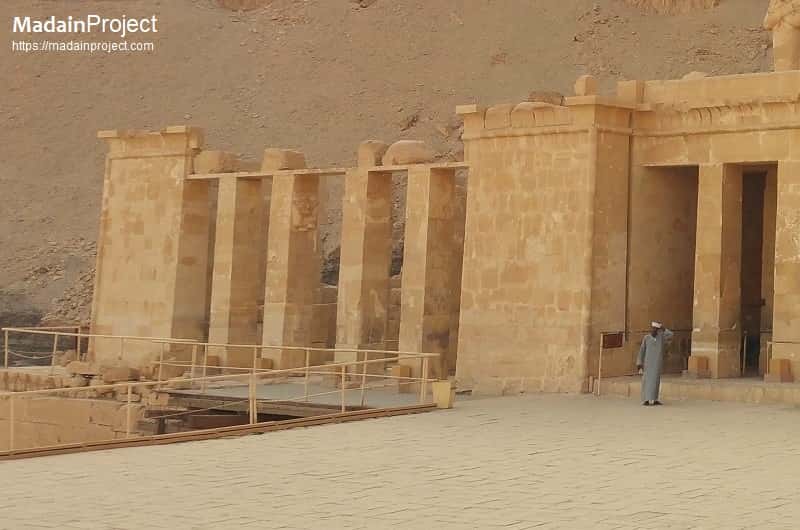