Mevlid-i Halil Mosque, also the Mevlid-i Halil Camii, Mevlid-I Halil Magarasi or Dergah Camii meaning the mosque of the birth place of God's friend (Abraham), built next to the site where prophet Ibrahim (Biblical Abraham) is believed to have been born. The structure was named as the Scarlet Church as there are numerous scarlet colored pillars inside and the mosque were constructed instead of the structure between 1170-1175 years by Nur al-Din Zengi.

The mosque is the most ancient of the mosques located in the city center of Urfa province. As the structure was an old synagogue, it was transformed into the St. Stephon Church by the Bishop Rabula whom had died between CE 435-436. And then finally; In 1523, a mosque was built by Muhammad Salih Pasha in the same area.

The mosque has a rectangular plan, was converted into a mosque on the wall between the cave and a small minaret. In addition, two more minarets were added to the southeast and the northwest corner of the mosque. According to the inscriptions of the mosque; It was repaired by Muhammad Mes'ud (1816) and his son Mahmut (1852). The most recent renovation was carried out in 1992/93 and on 28 May 1993 opened to worship as a new mosque.

The building was last restored in 1951 under the leadership of Sheikh Muslum Hafiz of Urfa and supported by the people. A church was built in the name of Mary. This church, which was registered as the Virgin Mary Church, was converted into a mosque during the reign of the Abbasid Caliph Me'mun (813-833). 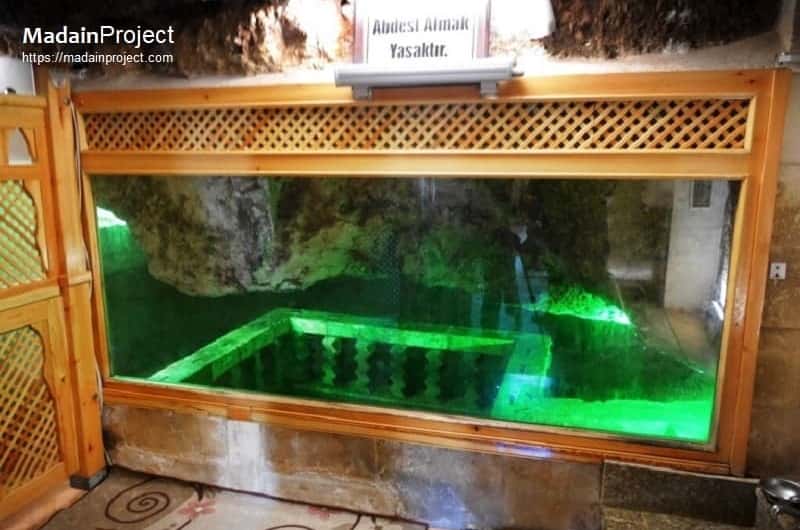 The Cave of prophet Ibrahim is believed to be the place, where prophet Ibrahim was born. It is accepted by the public that the water coming out of the Mevlid-i Halil Cave is the most healing water after Zam Zam. According to the tradition his mother gave birth in a cave and hid the child there for seven years, because the evil king Nimrod wanted to kill all newborn males who could threaten his reign, topple him from his throne, and change the Pagan religion of the time.

Pool of Sacred Fish near the birthplace of prophet Ibrahim at Mevlid-i Halil Mosque. Accrding to Islamic tradition Nimrud threw prophet Ibrahim (biblical Abraham) in fire at this location. According to the local legend, when Nimrod flung Abraham into the fire, the fire became water and the firewood became the fish, which persist to this day.