Memphite Tomb of Horemheb in Saqqara

The Memphite Tomb of Horemheb is located in the Saqqara necropolis, near Memphis, Egypt. It was constructed when Horemheb was serving as the commander in chief of the Egyptian armies during the reign of Pharaoh Tutankhamun (18th dynasty) and before he ascended to the throne and was never used for his burial, since he later built the Theban tomb KV57 for this purpose. His two wives Mutnedjmet and Amenia were buried within the structure.

The construction of the tomb started in year 1333 BCE and ended in 1319 BCE. After the death of Tutankhamun's successor Ay, Horemheb became the next Pharaoh and started the construction of a royal tomb in the Valley of the Kings at Luxor. It is possible that the first pylon and the forecourt of his tomb in Saqqara were built only after he had become king; the tomb served ultimately for the burial of his queen, Mutnodjmet. Her mortal remains and funeral gifts, together with those of a previous wife of Horemheb were discovered in the tomb's main shaft complex, which is 28 meters deep. The architectural form of the tomb is strikingly similar to that of a temple, with maltiple pylons and courtyards finally leading to the funerary chapels. A mud-brick pyramid would originally have stood above the central cult chapel. The remarkable wallreliefs of the inner courtyard show highlights of the general'scareer and funeral scenes.

The tomb was built in three phases, as Horemheb's status rose. The first design consisted of an entry pylon into forecourt, a colonnaded court containing the burial shaft and three chapels or offering rooms. Intrusive burials were found in the side chapels. The forecourt was then walled to produce two small chapels, one at each side. They were entered by two new piercings through the pylon. A new walled forecourt was constructed in front of the pylon. To make this extension a 5th–6th Dynasty (circa 2500-2200 BCE) mastaba was demolished and the burial shaft with a burial chamber some 17 meters below incorporated into the new forecourt.

Burials from the 19th Dynasty (circa 1292 BC to 1189 BCE) were found at 9 meters depth. Finally the forecourt was closed by a pylon some 7 meters high and colonnaded to form the first peristyle open court. The narrowed original forecourt was covered with a vaulted roof and contained statues while the chapels became storage rooms.

The tomb was discovered by art robbers at the beginning of the 19th century CE. Looted reliefs were acquired by a number of European and American museums. The tomb's location was then lost, it was relocated in 1975 CE and excavated in 1979 CE.

The tomb of horemheb was found by art collectors around 1825 CE and relief blocks from the tomb were subsequently taken to the Egyptian Museum, Cairo, the National Museum of Antiquities, Leiden, and other museums around the world. The tomb was excavated in 1975-79 CE by a joint expedition of the Egypt Exploration Society in London and the National Museum of Antiquities in Leiden, under the auspices of the Supreme Council of Antiquities of Egypt. The forecourt was found in 2004-5 CE by the Leiden Museum and Leiden University. THe tomb was provisionally restored in the 1980s, when a number of resin casts of various scenes, now in different museums, were installed. It was further consolidated in 2007 CE.

First Pylon
The main entrance to the burial complex is through the eastern-most pylon, which provides access to the first court.

First Courtyard
The first court or the forecourt is located between the first and the second pylons.

Peristyle Courtyard
Military scenes were carved on the peristyle court and scenes showing Horemheb's duties in office on the walls of the later, first peristyle open court including one where he deputised for Tutankhamun on the north wall. On the North wall are scenes from the funeral, showing kiosks with smash pots and mourners. Only the lowest register is well preserved. From the next register above only the legs of horses and the wheels of chariots are visible. On the east wall, on the north side are shown houses. The wall is in general only badly preserved.

Reliefs and Statues from the Tomb of Horemheb

Introduction
Horemheb’s high social position is reflected in the extraordinary quality of the reliefs and statues from histomb. Numerous stone fragments of the wall decorations were found during excavations carried out from 1975-1979 CE and 2004-2006 CE. Because they do not join onto the extant scenes, they cannot be put back on the walls of the tomb. They are now kept in storage near the Imhotep Museum at Saqqara, together with some fragmentary statues of Horemheb and his wife. Another statue from the tomb has been put on display in the Luxor Museum.

Many other reliefs and statues from the tomb are now dispersed in fourteen museums in Cairo, Europe, and the United States. These were discovered during earlier explorations in the 19th century CE, when it was still allowed to take such finds outside of Egypt. No record was kept of these excavations and the site was completely forgotten afterwards. Only modern excavations have allowed the establishment of the identity and original location of these museum objects.

From 1985 CE, several replicas of reliefs now in foreign museums were created and installed in their respective places on the walls of the tomb. In the outer courtyard, there is a replica of a stela now in London. In the inner courtyard, there are replica reliefs from museums in Berlin, Bologna, Leiden, London, Munich, Paris and Vienna. The replica of the relief with Nubian prisoners (inspect) preserved at the Archaeological Museum of Bologna (Italy) was installed most recently in 2013 CE, accomplished with digital acquisition technology prototyped by the ProtoLabLaboratory-ENEA of Bologna and the sponsorship of CISE of Imola, the Rotary Club of Imola and the Shipping Company Tarros.

However the wall decoration of Horemheb's tomb can never be completed, because it served as a convenient quarry in antiquity and a large number of relief blocks are lost forever. Following is a list of some of the reliefs;

Relief with Nubian prisoners
The relief shows several Nubian prisoners with Negroid features, kinky hair and earrings who are seated on the ground submissively as three Egyptian soldiers with batons watch over them. A scribe is writing a report about the occurrence and is selecting two prisoners as servants for the court of Tutankhamen, as noted by the inscription. The relief was part of a larger composition with numerous foreign prisoners of war and it celebrated – for eternity – the prowess of Horemheb, the general commander of the army. 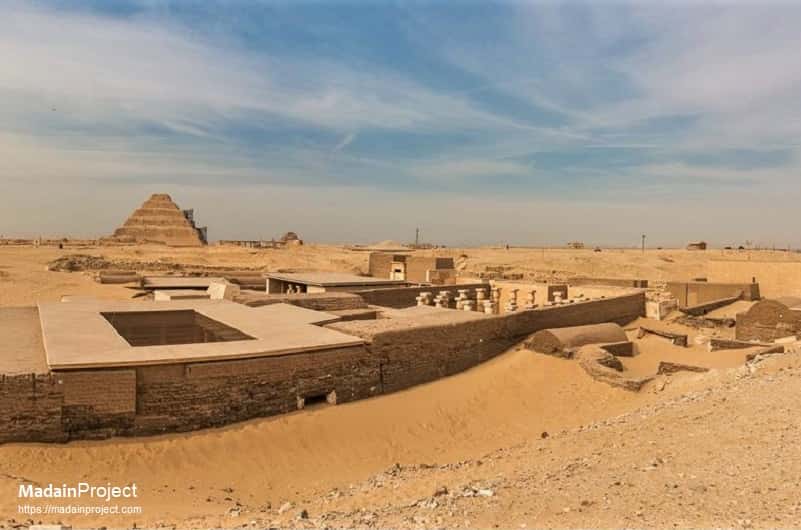