The tomb KV57 is the royal (Theban) tomb of Horemheb, the last pharaoh of the Eighteenth Dynasty and is located in the Valley of the Kings, Egypt.

Before ascending to the throne of Egypt he was one of the two advisors of boy king Tutankhmun; other being Ai. Horemheb succeeded Ai to the throne, after his death, who had acceded the kingship by marrying Tutankhmun's widow, Ankhesenamun. During his advisorship Horemheb had built a temple-tomb at Saqqara and had time to expand it as well more than once. He qualified for a tomb in the Valley of the Kings when he became king of Egypt, later on one of his wives Mutnejemet was buried at the Memphite-tomb in Saqqara.

The tomb Kv57 was located by Edward Ayrton in February 1908 CE. Due to its location in the valley floor, the tomb was filled with debris that had washed down during occasional flash-flooding. The tomb is markedly different from previous Eighteenth Dynasty royal tombs as it has a straightened axis, and has painted reliefs instead of murals; the "Book of Gates" also appears for the first time. The king's red granite sarcophagus was found with its lid broken, though otherwise intact. The tomb contained the remains of several burials, none of them conclusively belonging to Horemheb.

The tomb consists of a descending entrance stair, a sloping passageway leading to another descending stair, and another passageway that ends in a well shaft. Beyond the well chamber is the first pillared hall. Cut into the floor on the left side of the pillared hall is a staircase, originally sealed, leading to another descending passage and, via another flight of steps, the antechamber. Beyond this room is the pillared burial chamber, surrounded by storerooms. The floor at the far end of the burial chamber is lowered to create a crypt.

The layout is transitional in form between the "dog-leg" style of earlier Eighteenth Dynasty tombs and the straight axis tombs of the Nineteenth Dynasty; more precisely this layout is known as a jogged axis. The steep descent of the earlier style is combined with the large straight corridors prevalent in the later style. The pillared hall is squarer than its previous iterations, as it would continue to be in future royal tombs. However, some novel features occur in this tomb that are not seen again, such as the ramp at the top of the stairs leading to the crypt around the sarcophagus, the second set of stairs in this area, and the burial below the floor in one of the storerooms.

Entryway A and Corridor B
The 2.66 meters wide entryway has 28 stairs descend at an angle of aproximately 36 degrees. The walls are undecorated and there is a very large overhang before the Gate B.

The Corridor B is a 13.28 meters long narrow passage directly connected to the entryway-a through a gate. It descends at an angle of fourteen degrees. Just as the entryway its walls are also undecorated. The corridor-b is 2.65 meters wide and 2.6 meters high.

Descent C and Corridor D
The descent-c is a stairway with 25 steps leading down in to the access shaft at an angle of approximately 36 degrees. The entire length of the 5.21 meters wide stairway is approximately eight meters with varying height. The undecorated walls contain alcoves that are approximately fifty centimeters deep.

The 10.5 meters long Corridor-D is approximately 2.8 meters wide and descends at an angle of twenty five degrees. The walls in this corridor are also undecorated.

Well Chamber E
The access to the next "pillared Hall F", like most well chambers, was bricked up,plastered and painted over. This wall was breached in antiquity; either by tomb robbers or by the 20th dynasty who cleared most of thetombs in the Valley of the Kings and relocated the bodies to "places of safety". The mummy of pharaoh Horemheb has never been found.

This chamber measures 3.37 meters in length, 4.16 meters in width and 6.4 meters in height. The chamber is not square to the Corridor D, but is rotated 3 degrees to the left. The bottom of the shaft is filled with debris.

The upper section of the well-chamber is decorated on all four walls. The ceiling is dark blue and covered with five-pointed stars and the top of each wall is decorated with a khekher frieze. The colour of the walls is the same blue-grey as used in the tomb of Amenhotep III. Earlier tombs had used a yellow background, possibly to emulate a papyrus. The symbolic significanceof the blue-grey combination is not known.

Pillared Hall F
The pillared-hall-f contains two pillars and is angled to the left by four degrees. The dimensions of the hall are 7.53 meters in length, 6.88 meters width and 2.72 meters high. This chamber was used in previous tombs to change the direction of the lower chambers; this tomb has the chambers in an almost staight axis, a style which owes more to Akhnaten than to Amenhotep III. A set of stairs descends from this hall in the north-western corner.

Corridor G and Descent H
The 7.6 meters long and 2.62 meters wide corridor descends at an approx. angle of 14.7 degrees.

The Descent-H stairway has a set of twelve steps and descends at an approximate angle of 9.6 degrees. This chamber and descent, also undecorated, is slightly rotated to the right.

Chamber I
The almost rectangular chamber is 5.21 long, 4.12 meters wide and 2.66 meters high. This chamber is decorated on all four walls in a design similar to the Well Chamber E. The background colour is blue-grey combination and each wall depicts Horemheb with one or more divinities in painted raised relief. The ceiling is black with yellow-golden stars, whereas the Well Chamber E has a more traditional ceiling of dark-blue.

Burial Chamber J
The burial chamber of the tomb KV57 is approximately 7.8 meters wide and 8.4 meters long (between the entrance to the lowered sarcophagus area) and with a height of 2.91 meters. This section has six columns and two sets of steps leading down to the lower area.

The upper (inspect) chamber was only partially decorated; most of the walls have monochromic outlines of hieroglyphs and images that were never completed. A small section of the rear and lower left hand wall were actually painted - the rest is in outline only. A khekher frieze is outlined at the top of the walls and the ceiling is undecorated - it would almost certainly have had yellow-gold stars painted on to a dark background, but work on the ceiling was never even started.

The decoration was a new variation on previous works; instead of showing vignettes from the Amduat, it showed "The Book of Gates". This would have shown the twelve hours of the night, the gatekeepers for each hour and passwords needed to pass those gatekeepers. The Book of Gates became the standard texts painted in tombs of this period.

The lower chamber is 8.95 meters wide by 5.73 meters long, the flat ceiling is 4.25 meters hight. There were signs of destruction when the tomb was opened in the modern period. Fragments of smashed canopicjars were found. There are two niches for magic bricks in the east wall and two more in the west wall. Outline sketches had been made of a continuation of the "Book of Gates", especially on the rear (north) wall (inspect) which showed the hour six and the judgement scene in much more detail.

Side Chambers Ja and Jaa
The chamber Ja measures 2.63 meters in width (north to south), 2.11 meters in length and 2.2 meters in height. The undecorated chamber contains a shaft in the floor that leads to the connected "chamber Jaa".

The entrance to the chamber Jaa is positioned roughly central on its entry wall. The undecorated chamber measures 2.87 meters in width (north to south), 2.3 meters in length and 1.07 meters in height.

Side Chambers Jb and Jbb
The side chamber designated "Jb", also dubbed as the "Osiris Room", measures 3.16 meters in width (north-to-south), 3.19 meters in length and 2.64 meters in height. With the exception of a hurriedly painted "Osiris in front of a djed-pillar, enclosed in a shrine" on the rear (western) wall, the room is also undecorated.

The "chamber Jbb" measures 2.65 meters in width (east to west), 2.13 meters in length and 1.81 meters inheight. The entrance is positioned just to the west of its entrance wall. The room is also undecorated.

Chambers Jc, Jcc and Jccc
Another chamber directly connected to the central burial chamber is designated as "Jc" measures 7.25 meters in width (east to west), 5.23 meters in length and 3.11 meters in height. The construction of this chamber was never completed nor was it decorated.

The "chamber Jcc" measures 2.65 meters in width (east to west), 3.14 meters in length and 2.14 meters in height. This chamber is also unfinished and undecorated.

The "chamber Jccc" is 2.5 meters wide (east to west), 2.1 meters long and less thanone meter in height. This chamber is also unfinished and undecorated.

Chambers Jd and Je
The chamber designated "Jd" measures 3.14 meters in width (north to south), 2.13 meters in length and 1.84 meters in height. This side chamber is also unfinished and undecorated and has no subsidiary chambers.

The chamber Je connected to the upper part of the burial chamber of KV57 measures 2.57 meters in width (north to south), 2.07 meters in length and 2.02 meters in height. This roughly square chamber is also unfinished and undecorated.

Sarcophagus
The sarcophagus is made of red granite. It measures 2.72 meters in length, 1.15 meters in width and 1.41 meters in height (including the lid). The lid, also of red granite, has been cut with three slots for wooden cramps as part of ancient repairs to a diagonal split.

The design of the lid is in the form of a vault with rectangular block ends, and although bones were found within the sarcophagus, they are not considered to be those of Horemheb. His body may have been removed in the tomb clearances of the twentieth dynasty, but it has never been proven to have been found.

The sarcophagus of Horemheb is decorated (inspect) with raised carvings of Isis, Neith, Nephthys and Selket on the corners. The four sons of Horus and Anubis (twice) are carved in low relief on the long sides.

Human Remains
Grafton Elliot Smith conducted a cursory examination of the human remains and determined that the remains from the side chambers were those of two women, the skulls on the floor of the burial chamber belonged to a man and two women, and the sarcophagus contained the bones of a single person of uncertain sex. Their identities are unknown but they may have been minor members of the royal family who were not moved when the royal burial was disassembled, remnants of a possible cache, or intrusive burials dating to the Third Intermediate Period. Nicholas Reeves suggests that Horemheb is indeed among the human remains found in KV57. He posits that, based on the ink graffiti, the king's mummy was removed and rewrapped during the Wehem Mesut. During this restoration the body was separated from its coffin, which was later used for the reburial of Ramesses II, before being returned to the tomb along with other royal mummies, forming a third royal cache. 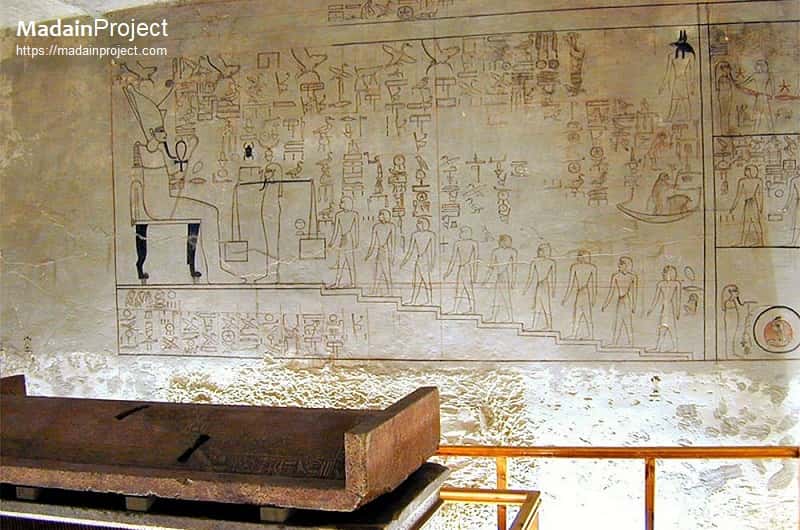