The Mastaba-Tomb of Mereruka is an ancient Egyptian burial complex, belonging to Mereruka (or Meri) one of Egypt's most powerful officials at the time. Mereruka was the vizier to king Teti, who was the first pharaoh of the 6th dynasty Old Kingdom period of Egypt. The tomb of Mereruka is located directly north of Teti's Pyramid.

The mastaba of Mereruka is the largest and most elaborate of all the non-royal tombs in Saqqara with 33 rooms or chambers in total.

His mastaba tomb remained hidden from view until it was discovered and excavated by Jacques de Morgan, of the Egyptian Antiquities Service in 1892. However, the first major publication on his tomb did not occur until over 40 years later in 1936 by Prentice Duell. Mereruka was also known by his 'beautiful' or chosen name of Meri.

The overall external dimensions of Mereruka's mastaba are 23 metres east-west, 30 metres north-south (extending to 41 metres when one includes Meriteti's addition) and 4.5 metres high, while the internal height of the ceiling is just over 4 metres. 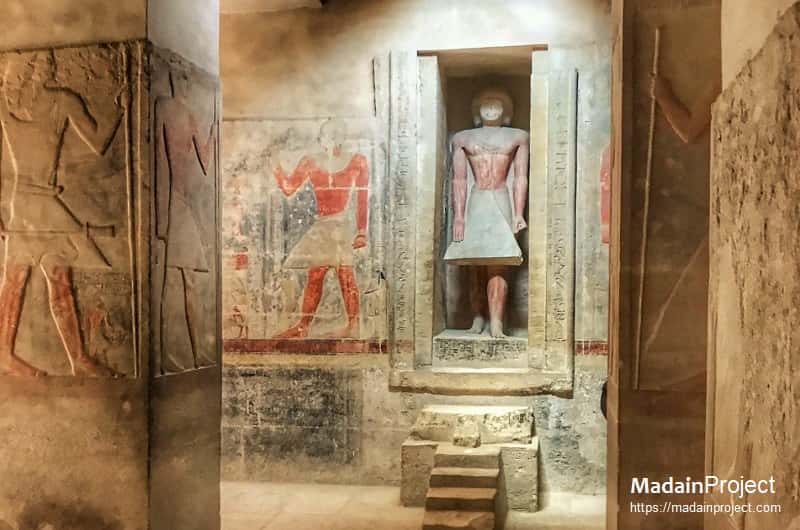 Entrance
The entrance to the tomb complex lies to the south, and is decorated with carved reliefs. The paintings on the wall in the entrance of the tomb show Mereruka painting the seasons and playing a board game.

A13: Central Chamber
A lifelike statue of Mereruka was found intact within the principal chamber at the far end of his mastaba tomb. This chamber is approached through the mastaba tomb's false door.