A pictorial timeline of Mecca, also pronounced Makkah; a city in Hejaz region, which is regarded as the holiest city in Islam. The information on this page is purely speculative. The ancient or early name for the site of Mecca is Bakkah (بَكَّة), also transliterated Baca, Baka, Bakah, Bakka, Becca, Bekka, etc.). In the Islamic view, the beginnings of Mecca are attributed to the Biblical figures Abraham, Hagar and Ishmael.

APA
Mecca Through Time (n.d.). Retrieved on January 20, 2022, from https://madainproject.com/mecca_through_time

The early history of Mecca is still largely disputed, as there are little unambiguous references to it in ancient literature prior to the rise of Islam. It is believed that prophet Ishmael son of prophet Ibrahim (biblical Abraham), actually settled and populated the area. Earlist account in Islamic history, recount as the prophet Ibrahim left his son prophet Ishmael and his mother Hajirah (Hegar) in the Arabian wilderness, it was here; where the mother and son ended up settling.

The first direct known reference to Mecca in external literature occurs in 741 CE, in the Byzantine-Arab Chronicle, though here the author places it in Mesopotamia rather than the Hejaz.

Abraham Leaves Hagar and Ishmael
According to the Islamic tradition, the site where prophet Abraham leaves Hagar and Ishmael, was a barren valley noted in the holy Quran as Bacca. This valley may have been a caravan route, as the tradition states that later on a trade-caravan passes through and makes a stop here.

This account also gives details of a miraculous appearance of a water spring, today known as Zam Zam. Over time people started to stay here and eventually a small town-ship settlement grew around the water source. Later on prophet Ibrahim and Ishmael built the Kaabah with in this settlement. And due to these factors the importance of this meagre township kept growing.

Parolin (2009), notes in his book Citizenship in the Arab World: Kin, Religion and Nation-State, that Ishmael (prophet Ismail) spoke Hebrew until he got to Mecca and married a Yemeni woman and learnt Arabic. Although the details are less-found in Islamic sources, this implies that there may very well be a settlement, known as Mecca.

First Construction of the Kaaba
Islamic tradition notes that after leaving his wife and child in the Arabian wilderness, prophet Abraham returns and builds the Kabah with his son Ishmael.

This building of a religious center, i.e. Kabah may have contributed to the extended influence of the Meccans. During this time it is possible that this may have had become a stop on the caravan and trade routes, between northern and southern Arabia.

Scholars such as Glen W. Bowersock assert that Mecca was a major trading outpost.

The Greek historian Diodorus Siculus writes about Arabia in his work Bibliotheca historica, describing a holy shrine: "And a temple has been set up there, which is very holy and exceedingly revered by all Arabians". But by the time of Qusai, the city of Mecca had grown quite in fame and importance. 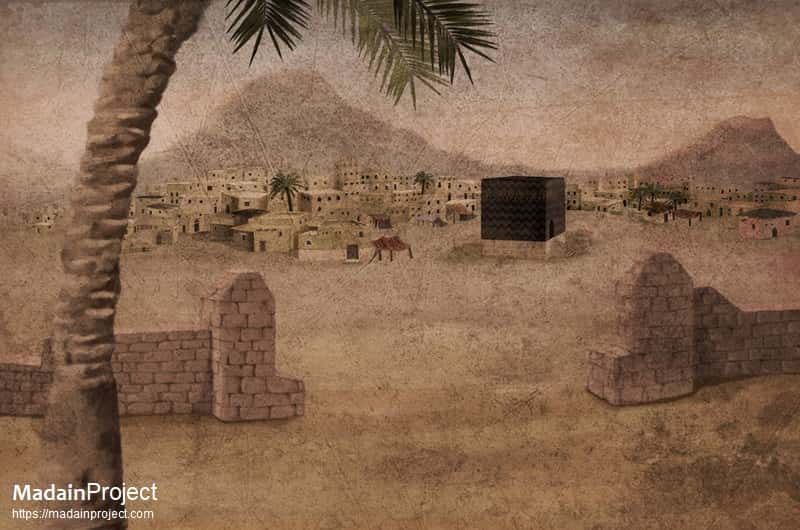 Himyarite Invasion (570 CE)
Abraha is believed to have launched an expedition against Ka‘bah at Mecca, led by a white elephant named Mahmud, in order to destroy the Ka‘bah. According to the traditions there were some forty thousand men and several elephants, or even as many as eight. Several Arab tribes attempted to fight him on the way, but were defeated.