From America to Mecca on Airbourne Pilgrimage

A Moslem Student at Harvard Business School Records Islam's Sacred Rites in Color in the Interest of World Understanding, by Abdul Ghafur Sheikh. With Illustrations from photographs by the Author. 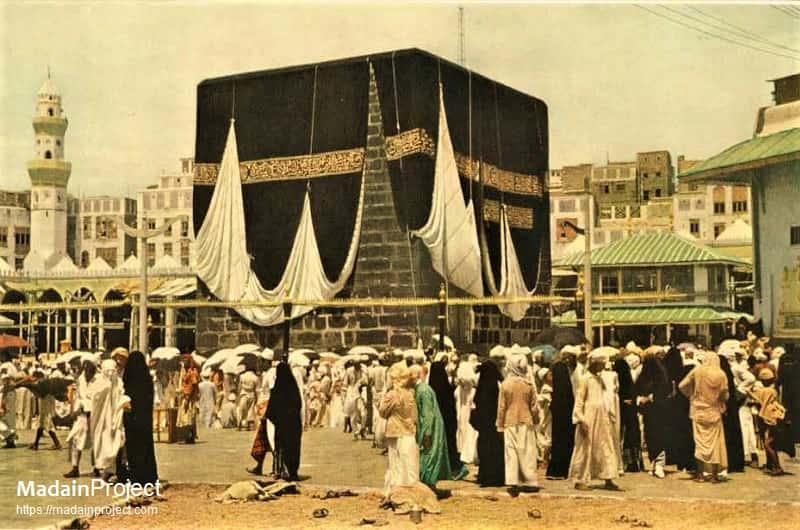 Pilgrims Watch as Egypt's Gift, a Rich Mantle for the Kaaba, Drops into place
The gold-embroidered black robe is renewed during each hadj. Islam;s holliest house has a single gold-and-silver door, seldom opened. 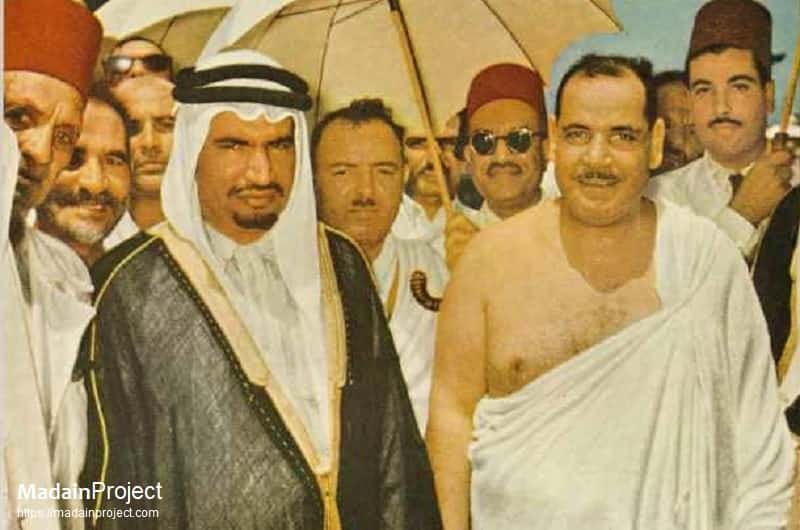 Rich and Poor, Brown and White Perform Their Pilgrimage as Equals
The Governor of Jidda (in Arab dress) greets the chief of the Egyptian delegation brining the year's new covering for Kaaba. Only those bound for Mecca on the hadj need to wear the pilgrim's garb - the ihram - two pieces of seamless cloth wound about the body so as to leave one shoulder bare. Purpose of the ihram is to erase class distinctions and to stress, in its resemblance to the shroud, the pilgrim's renunciation of worldly things. While on hadj, the devout must avoid quarrels, have no relations with women, say nothing frivolous, and, except for sacrifices, kill no plant or animal save the nuisances; crow, kite, rat, scorpion, or biting dog. 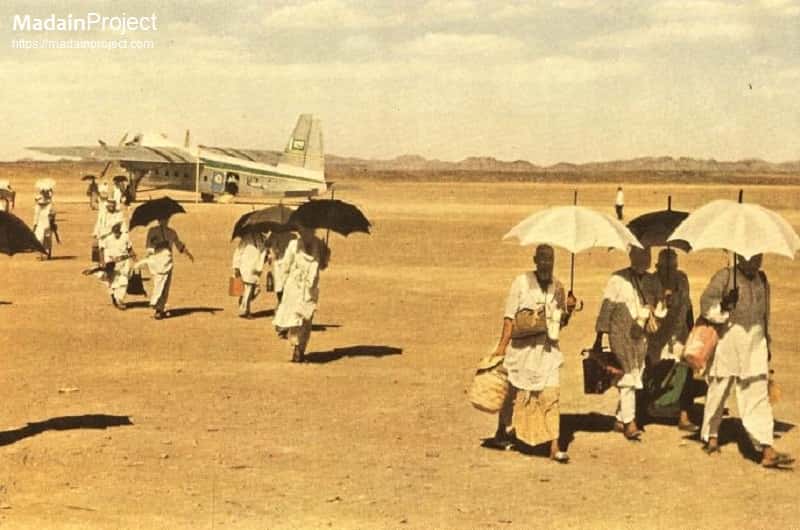 Here am I, O God, at thy command! Cry pilgrims arriving in Saudi Arabia by Airplane or Ship
Moslems may acquire merit by joureying to Mecca at any time of year, but the crucil ceremonies of the great hadj (Hajj) occur from the 8th to the 13th of Dhu 'l-Hijja, twelfth month of the Moslem year. Many walk overland from the Levant, most come by ship, but thousands (like the author) fly. Commerical lines last year were so deluged by applications that the United States Air Force stepped in and airlifted nearly 4,000 pilgrims from Beirut to Jidda. 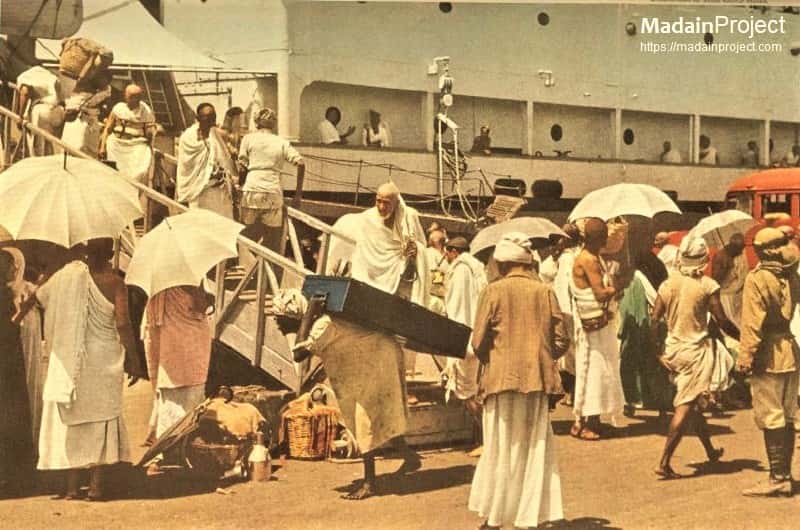 Onto the docks of Jidda (Jeddah), gateway to Mecca, pilgrims disembark from a ship bringing Egypt's annual gift, a new covering for the Kaaba. 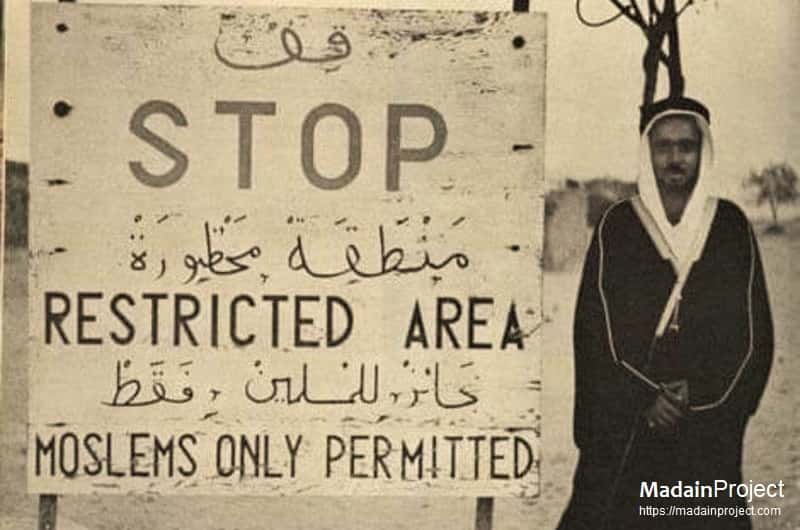 Looking More Like an Arab than a Harvard Student, the Author Nears Mecca
Few non-Moslem travelers are known to have penetrated Islam's holiest sectors. First European to enter in disguise was Ludovico di Verthema of Bologna in 1503. Dest known was Sir Richard Burton, the English explorer. The present author, a Pakistani Moslem born in Nairobi, Kenya, here stands beside a sign midway between Jidda, port of entry for pilgrims, and Mecca, Islam's holy city. 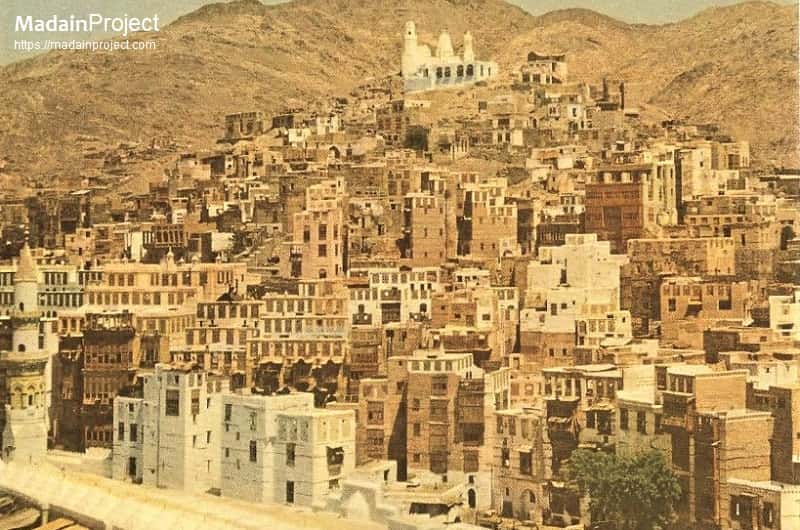 Tier on tier, Mecca's houses rise above the Grat Mosque. A key caravan point along antiquity's myrrh and frankincense route, Mecca was a pilgrimage center fro totem worshipers long before Mohammed smashed the city's idols. Housing problem became acute when the annual hadj brought about 500,000 pilgrims. Mecca's normal population is some 150,000. Alleys, sidewalks, doorways, courtyards, gardens, and even mosques were crowded by night with sleeping figures. 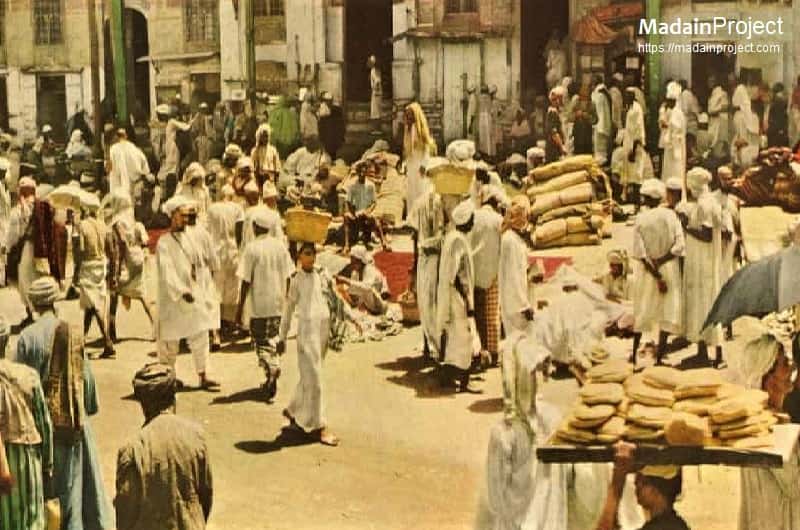 Merchants crowd the streets of holy Mecca. By Night thousands of pilgrims cool, eat and sleep on sidewalks. Cries of squatting rug sellers rise above the slap-shuttle-slap of sandaled feet. A baker balances a tray of fresh bread (lower right), luckier men walk in the sade of umbrellas. Others wear prayer rug over shoulders (left). Barber shops and cafes serve customers beside arched entrances of buildings. -Folio 25 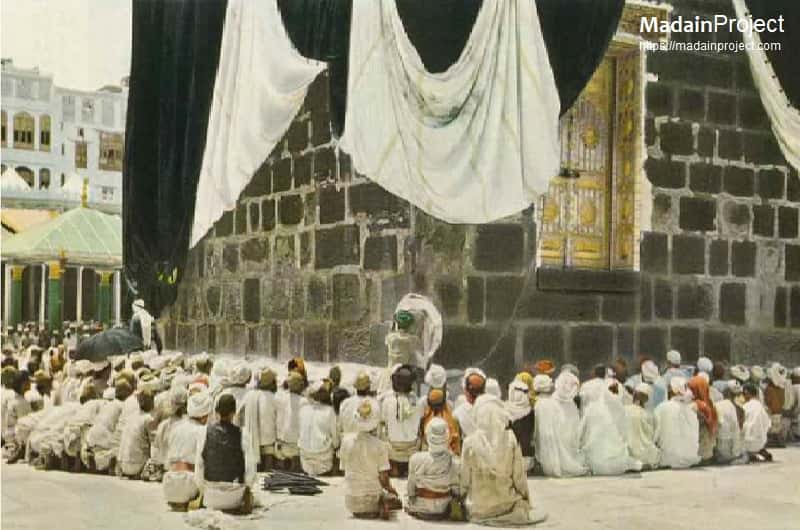 A policeman (center) cleans the Kaaba's sacred Black Stone. His job is keeping order among worshipers seeking to kiss the stone. 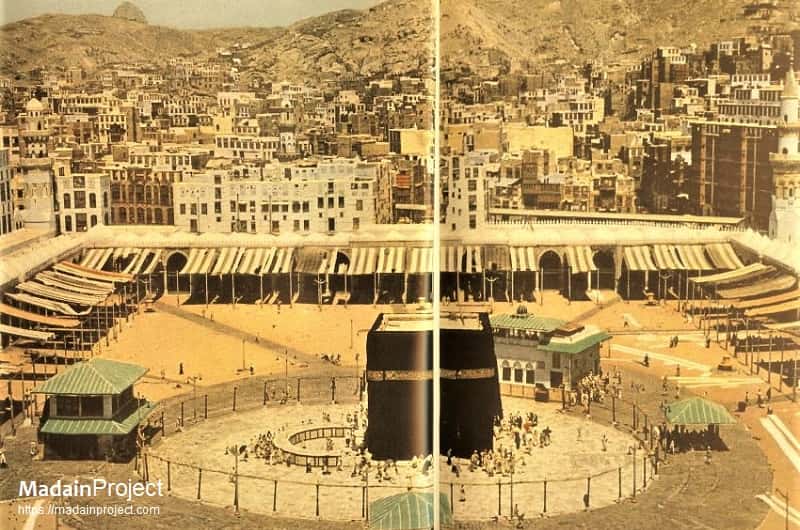 Barefoot on the Burning Marble, Pilgrims Shuffle Counterclockwise Arount the Kaaba
Seven times, on three different days, hadjis must circle the black-robed House of God-three laps at a trot, four walking. Awnings shelter those who wish to rest and pray in shade. Many pilgrims sleep here at night.

Pilgrims Shrouds, Sprinkled at Holy Well of ZemZem, Dri in Strips on Mosque's Paving
Six minarets crown walls; 44 doors pierce them. ZemZem's domed well house stands just behind the Kaaba. Semicircular barrier (left) marks an area where a section of the Kaaba stood until a flood destroyed it. 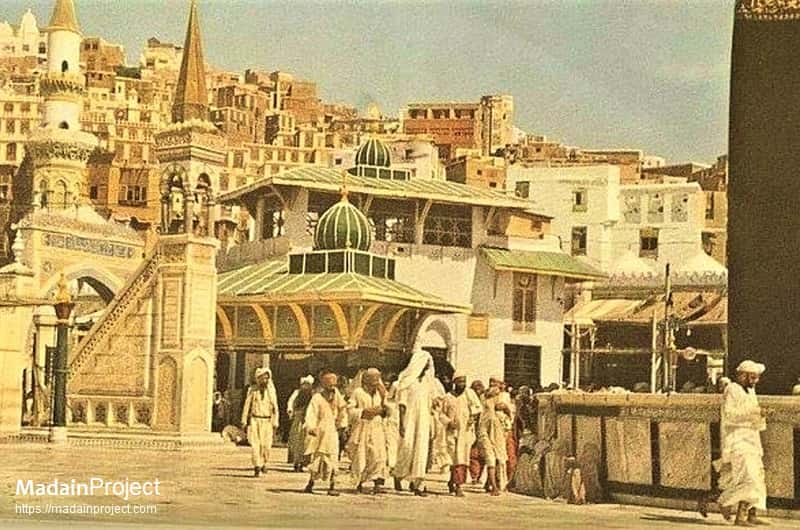 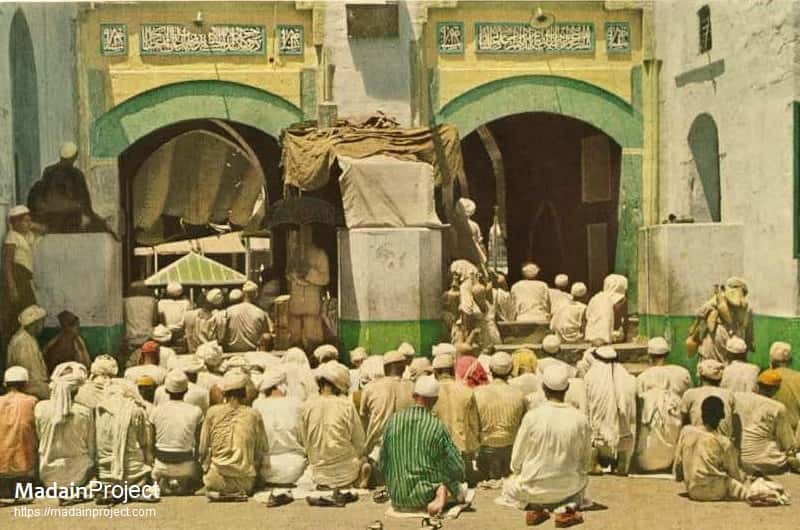 Moslems don't sing hymns; their ceremonies consist mainly of prayer. On Fridays an elder delivers a brief, stylized sermon. The pulput stands at left. An overflow crowd, unable to enter Mecca's packed mosque, kneels in a gateway to hear the imam's address. 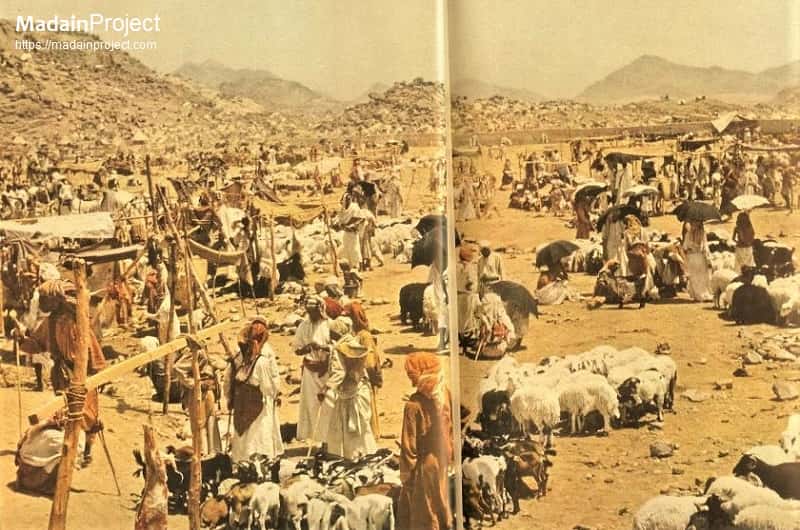 Thousands of Sheep and Goats Await the Pilgrim's Knife on the Field of Sacrifice at Mina
An integral part of the hadj, the feast of Id al Adha is celevrated simultaneously throughout Islam. It commemorates God's sparing Abraham the sacrifice of his son, Ishmael, supposedly near hill at left. 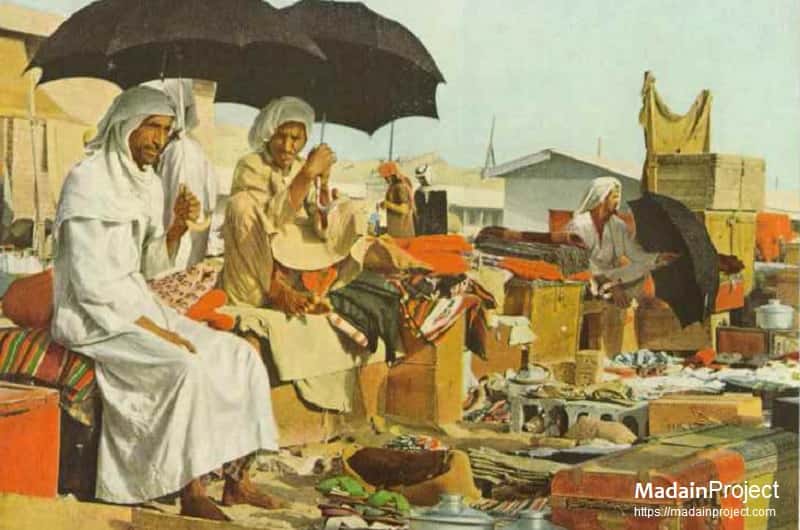 Merchants in Dhahran Can Take Inventory at a Glance
Umbrellas in Saudi Arabia rarely serve to ward off anything but the relentless sun. Tough-soled Arab tradesmen in this bazaar scorn to wear the sandals they offer for sale. 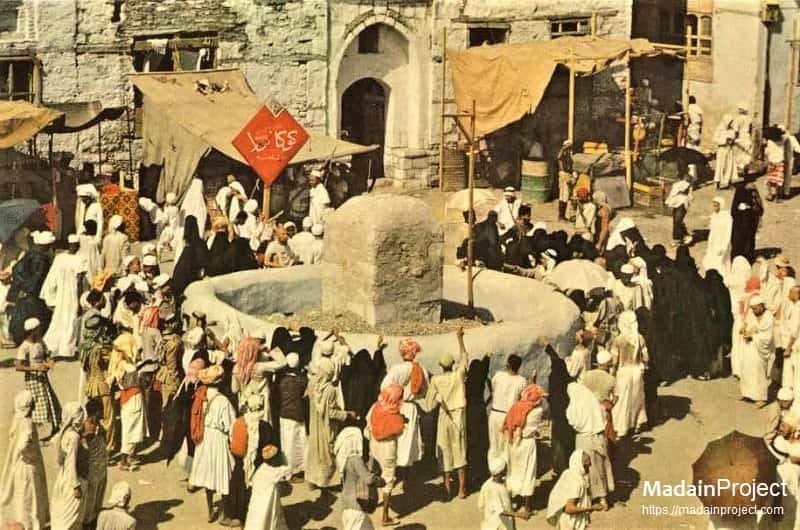 Pebbles Fly. The Pillar is Stoned at Mina
According to Moslem legend, Ishamel encountered the Devil three times at Mina and on each occassion rebuffed tempting Abraham, and evade hi rile as a living sacrifice to God. Now pilgrims rehect the Devil by casting seven pebbles on three successive days at each of three pillars marking the spots where Ishmael was tempted. Shouting "God is most great!" with each throw, the pilgrims dodge bad pitches from the other side. With nearly 300,000 Moslems on hadj last year, the pillars were hit by about 30 million stones. Legen insists that angels remove the stones at night, but trucks have been known to help. 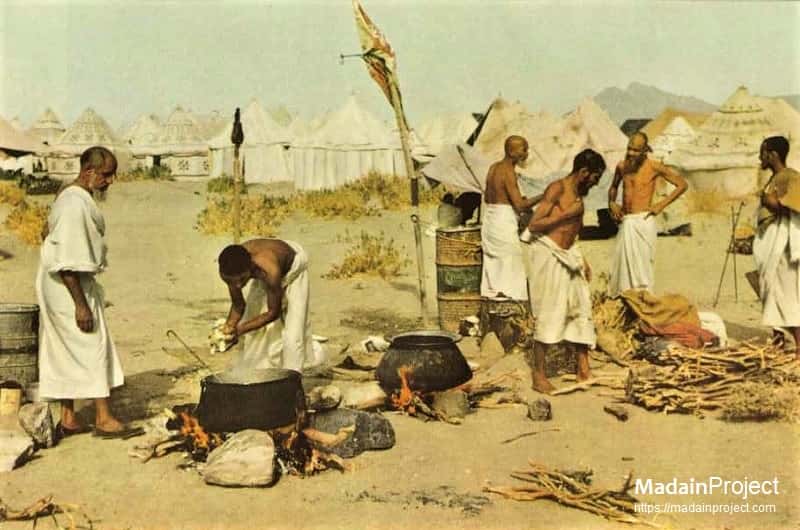 Pilgrims on Fiery Plain of 'Arafa Cannot Live by Exstasy Alone
Professional guides who conduct pilgrims to the Standing at 'Arafa must know how to cook as well as how to lead the appopriate prayers. Tradition demands that they play host for the midday meal, usually a pot full of lamb and rice. With hundreds of thousands milling aroun the plain and camping in nearly identical tents, it's no trick to get hopelessly lost. On an earlier hadj, the author (at the age of 8) and his mother became separated from the family and, footsore and thirsty, found them again in Mecca three days later. Saudi Arbia;s Government has done much to relieve the hardships of those on pilgrimage. 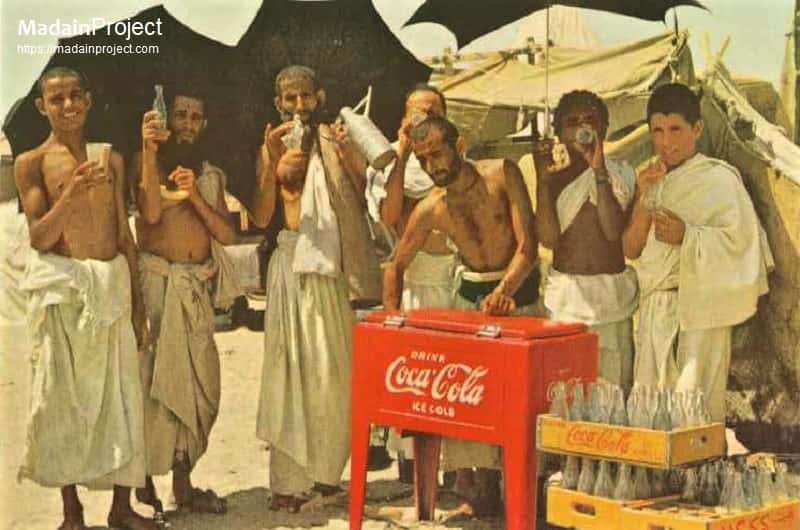 Time Out for a Coke
Moslems, whose religion bans alcoholic beverages welcome soft drinks from the famous red cooler. A bottling plant at Jidda sends Coca-Cola to Mecca. 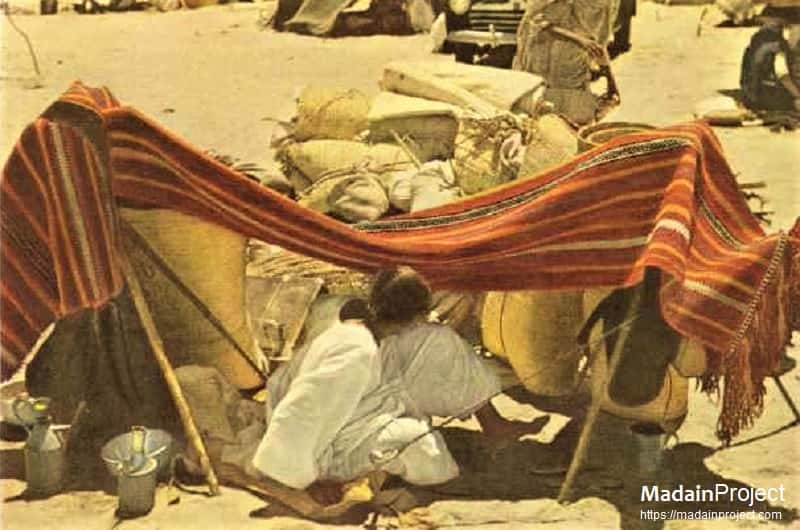 A Sudanese woman rigs shade against the fierce noon sun. Some pilgrims sell their fine rugs to finance their journey home. 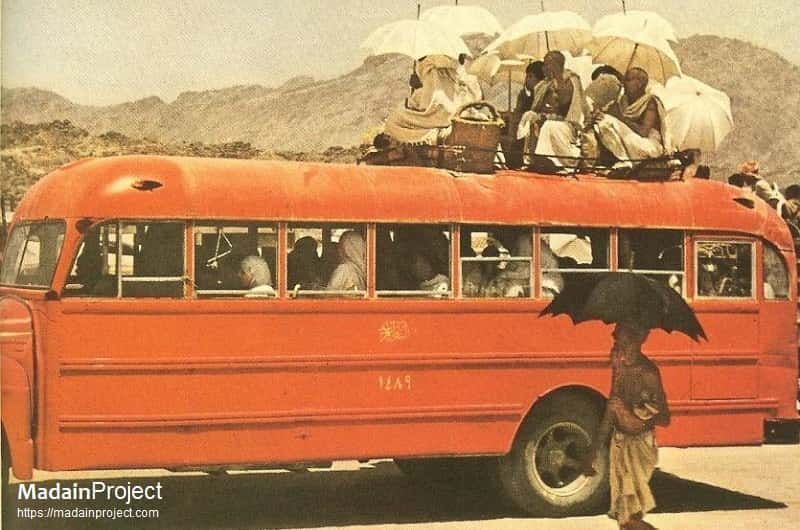 Bus and Car Go to 'Arafa. He Who Walks, Some Pilgrims Believe, Gains More Favor
Most pilgrims prefer to hire a cab or pay the Government;s fare for a bus ride along the hot route from Mecca to 'Arafa. These overflow passengers even spread their umbrellas while riding in the baggage rack on top. Traffic Jams on the main road are frequent. Arabs last year delighted to learn that one volunteer trying to untangle a snarl was Prince Faisal, Viceroy of the Hejaz, indistinguishable in his simple garb from any other pilgrim. 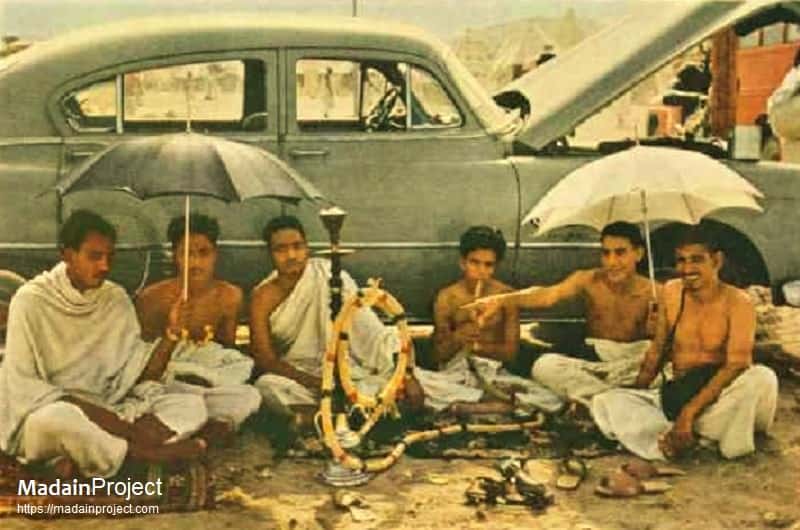 With Pontiac and Hookah, these young merhcants from Jidda perform their hadj in style. 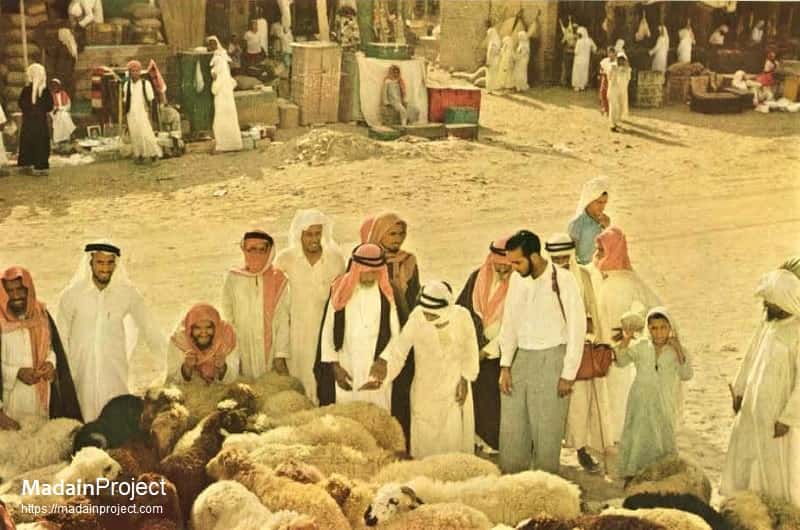