Tombs in Valley of the Queens

APA
Tombs in Valley of the Queens (n.d.). Retrieved on January 18, 2022, from https://madainproject.com/tombs_in_valley_of_the_queens

MLA8
Tombs in Valley of the Queens.” Madain Project, madainproject.com/tombs_in_valley_of_the_queens.

It is the second great royal cemetery after the famous Valley of the Kings. The Valley owes its modern name to the numerous toms of Queens which were cut into the hills during the 19th and 20th Dynasty. This is the place where some of the tombs of the Queens of Ramesses the Great can be found.

The tombs are numbered, just as the tombs in the Valley of the Kings, and there are quite a few tombs where all evidence of the original owner has disappeared. Below is a list of the tombs and burials, and a description of the owner of the tomb, when this information is available. More than 100 tombs survive in the Valley of the Queens, 22 of which preserve wall painting Of these only 4 are open to visitors, including Nefertari’s.

Valley of the Queens Tombs

QV33: Tomb of Tanedjemet
The Tomb QV33 in the Valley of the Queens was described by Lepsius. The tomb is listed as tomb number 14. The tomb was likely robbed at the end of the 20th dynasty, and reused during the 26th dynasty. A large amount of glasswork and other materials dating to this period were found in the tomb. During the Roman Period a large number of mummies was interred in the tomb. These burials are thought to date to the 2nd and 3rd century CE. 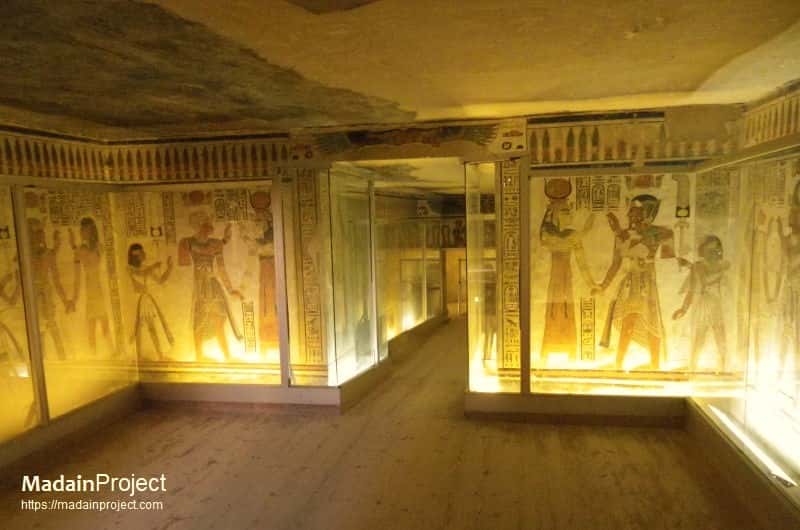 QV55: Tomb of Amun-her-khepeshef
The Tomb QV55 belongs to the eldest son and appointed heir of Pharaoh Ramesses III. The tomb QV55 is very well preserved, and was excavated by Italian archaeologists in 1903–1904. The tomb has a simple plan, consisting of a short flight of steps leading to a descending entrance ramp followed by an antechamber or entrance hall, which has an annex to the northwest. It is followed by the sarcophagus chamber. The decorative theme of this tomb features only Amenherkhepshef and his father, along with various gods, even though one of the inscriptions tells us that it was originally quarried at the request of the king for his "great royal children".

QV66: Tomb of Nefertari
The Tomb QV66 belongs to the Queen Nefertari, the Great Wife of Pharaoh Ramesses II. It is called the Sistine Chapel of Ancient Egypt. Nefertari's tomb once held the mummified body and representative symbolisms of her, like what most Egyptian tombs consisted of. Now, everything had been looted except for two thirds of the 5,200 square feet of wall paintings. For what still remains, these wall paintings characterized Nefertari's character.