Temple of Seti I (Abydos)

The temple of Seti I also known as the Great Temple of Abydos is one of the main historical sites in Abydos. The temple was built by pharaoh Seti I. The temple is also notable for the Abydos graffiti, ancient Phoenician and Aramaic graffiti found on the temple walls.

The temple of Seti I was built on entirely new ground half a mile to the south of the long series of temples. This surviving building is best known as the Great Temple of Abydos, being nearly complete and an impressive sight. A principal purpose of the temple was to serve as a memorial to king Seti I, as well as to show reverence for the early pharaohs, which is incorporated within as part of the "Rite of the Ancestors".

The temple was described by the English archaeologist Flinders Petrie. The temple was documented in 1933 in a four-volume series entitled The Temple of King Sethos I at Abydos. The books were largely devoted to the exceptional copies of the temple's wall paintings done by Ms. Amice Calverley.

The mortuary temple of Seti I has an unusual L-shaped ground plan and was built primarily of limestone, with the occasional use of sandstone in different areas throughout the structure. The temple was completed after Seti I's death, by his son, Ramesses II, whose cartouches are found in certain parts of the temple, along with his characteristic sunk relief style, that is different from the very fine raised relief of his father. 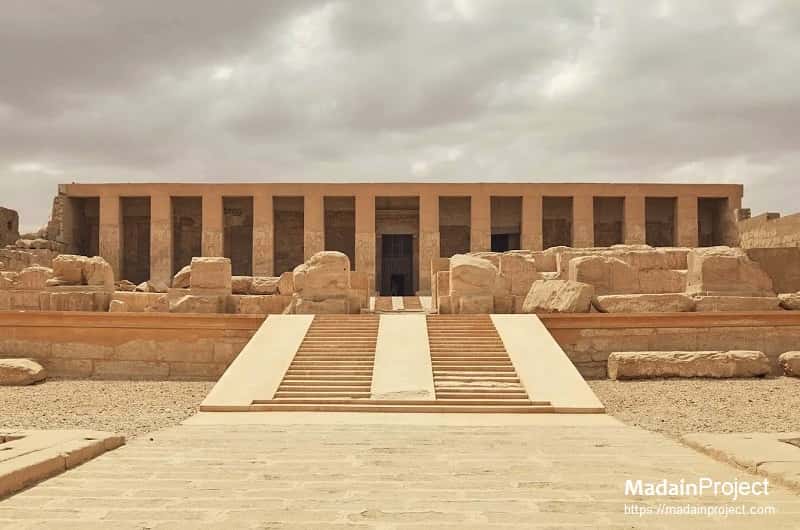 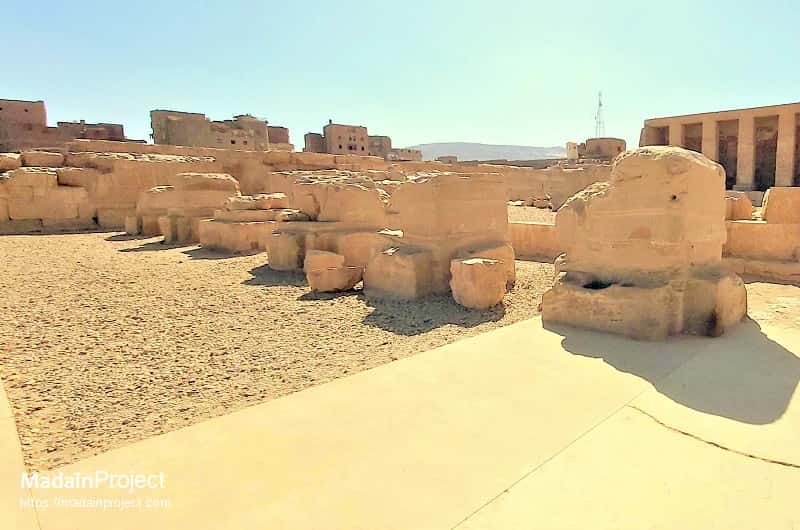 Forecourts
The entrance to the temple is located on the northeast and is through a large pylon, now destroyed, leading into the first open court, which is also badly damaged. A stairway ramp on the main axis of the temple leads to a raised terrace with a pillared hall that, in turn, leads to the second court through three entrances at the back of the hall. The courtyards were decorated by Ramesses II with scenes from the battle of Qadesh and of the king offering to the gods. Another staircase ramp leads to a raised terrace containing the covered part of the temple. 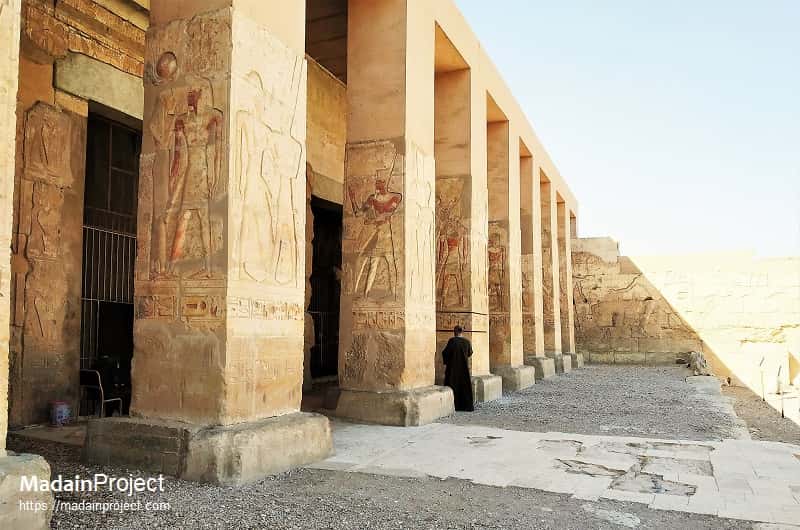 Entrance Portico
The entrance portico to the main temple building has twelve columns. This pillared portico forms the facade and seven gates, all but the central one of which were closed by Ramesses II, lead to the first hypostyle hall. 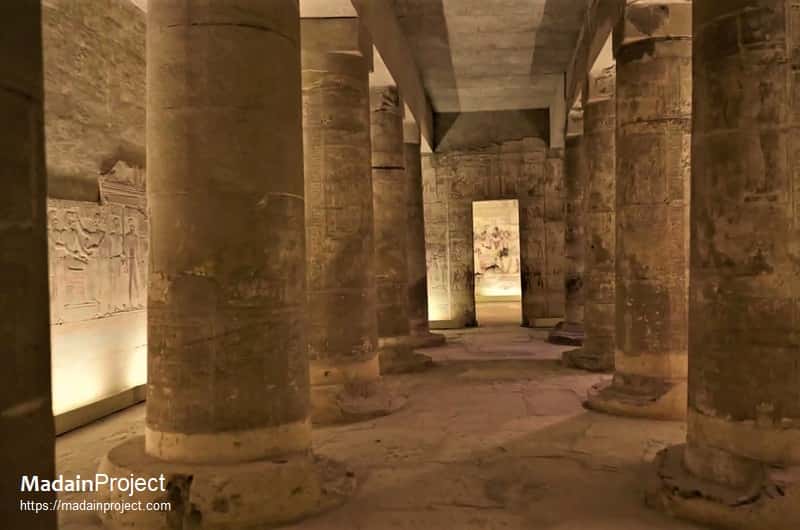 Large Osiris Hall
The large Osiris Hall or sanctuary is located are the very rear of the temple complex. It is a relatively large hypostyle hall with 12 columns. The walls are decorated with scenes, which still remain somewhat cryptic. To the west are three barque-shines dedicated to the gods Isis, Osiris and Horus. To the east is a smaller hypostyle hall, dedicated to god Osiris. 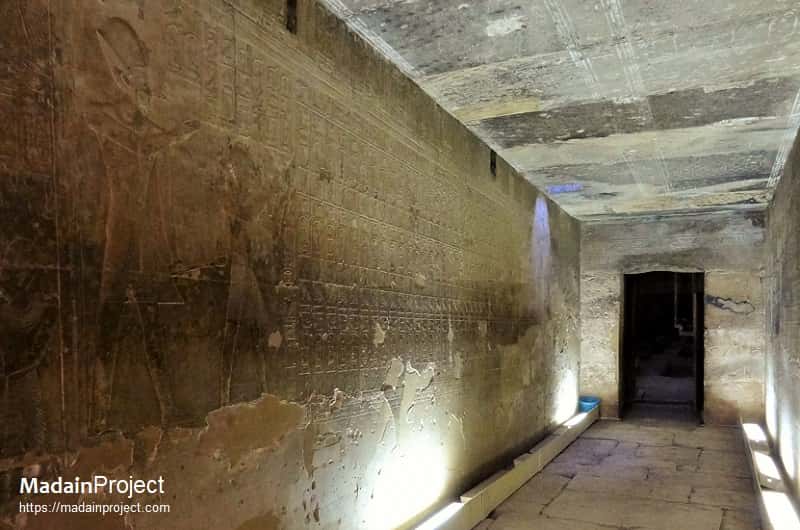 Corridor of the Lists
The Corridor or the Gallery of the Lists is a passage that connects the second hypostyle hall and the hall of the sacrifices. It is named as so, because it contains the "Abydos King List" (inspect) carved in its western wall. Also known as the "Gallery of the Ancestors", it is believed that this is where the temple rituals would have started. Here, pharaoh Seti I is represented standing on the viewer’s left, wearing the blue crown and shendyt kilt.

The Osirion or Osireon is an ancient Egyptian temple. It is located at Abydos, at the rear of the Mortuary Temple of Seti I. It is an integral part of Seti I's funeral complex and is built to resemble an 18th Dynasty Valley of the Kings tomb. It was discovered by archaeologists Flinders Petrie and Margaret Murray, who were excavating the site in 1902–03. The Osirion was originally built at a considerably lower level than the foundations of the temple of Seti, who ruled from 1294 to 1279 BCE. While there is disagreement as to its true age, Peter Brand says it "can be dated confidently to Seti's reign". 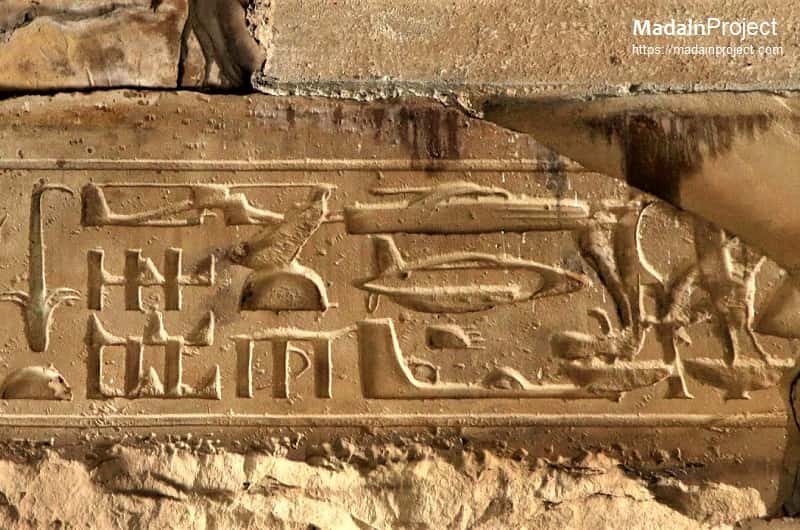 The so-called "Helicopter hieroglyphs" refer to an Egyptian hieroglyph carving from the Temple of Seti I at Abydos. These are located on one of the lintels in the first hypostyle hall. The "helicopter" image is the result of carved stone being re-used over time. The initial carving was made during the reign of Seti I and translates to "He who repulses the nine [enemies of Egypt]". This carving was later filled in with plaster and re-carved during the reign of Ramesses II with the title "He who protects Egypt and overthrows the foreign countries". Over time, the plaster has eroded away, leaving both inscriptions partially visible and creating a palimpsest-like effect of overlapping hieroglyphs. 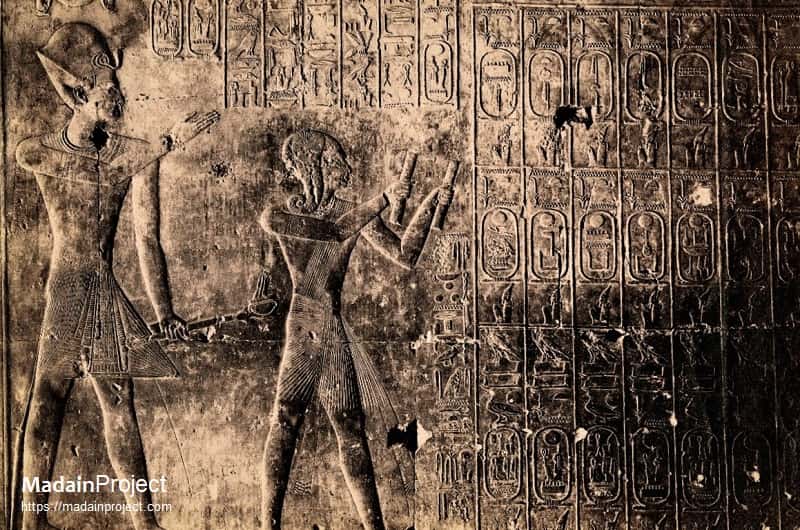